I will admit, towards the end of last year I thought about taking the blog entirely offline.

Working in an incredibly draining life insurance claims role, managing upward of 60, 70 claims, reading hundreds of pages of medicals, and responding to claimants on a daily basis was hardly the cushy job that the media make it out to be. With next to no training on how to manage claimants suffering from grief, mental illness, or even when receiving threats, they ultimately culminated throughout the day into one big ball of suppressed emotion which I would then take home with me. My desire to help people – which had led me into pursuing a legal career – was clashing hard against my sense of self-preservation.

I was in a workplace with a high turnover rate of staff and managers who took on an “everything is fine” attitude, coupled with working in an industry under intense public scrutiny, as well as industry watchdogs who can’t seem to fathom the idea that insurance is ultimately a risk product – not a financial product – and that it is a constant balancing act between customer’s best interests and good business models. Okay, so you want us to pay out every customer’s claim and change our internal policies to not exclude any conditions? But then in order to do that and to accommodate the wider pool, we would need to increase our premiums – but then customers complain that they are getting charged too much? If you think every customer should be paid out, does that mean you’re paying the same amount to a person with a broken leg which will heal in a year against a person who has amputated limbs from an accident?

And then don’t even get me started on the timeframes…customers who contact you within a week of you receiving their claim, asking why you’re taking so long, when you’re looking hundreds of pages of medical reports and workplace assessments to determine their future likelihood of ever returning to employment. Customers who will call you if you don’t answer their email within the day, medical centres that take months to gather reports, passive aggressive solicitors who follow you up while forgetting that you last tasked them with providing you more information.

I can say without a doubt that working in claims was one of the hardest roles of my career. I saw severely disabled customers who didn’t meet the terms of their policies, colleagues who took an extremely unsympathetic hard-line approach, abusive customers, employers who didn’t respond to our requests for information because they had a personal vendetta against the customer. It exposes you to quite an ugly side of people, and as my stint progressed to the year and a half point, I looked back and realised how socially withdrawn and cynical I had become compared to before I commenced the role.

I did my best to be patient, and my efforts paid off. I’m now in a new role, and while it’s a little early to say that I’m in a better place, I am tentatively hopeful that this role will prove better for my wellbeing. And look – it has already encouraged me to write again! I’ve also noticed I’m not as tired as I used to be over the weekends. Weekends I mostly preferred to spend them alone, curled up in bed napping throughout the day.

Some of you have been incredbly supportive – and I just want to give you a shout out. A lot of you follow me still via my Instagram, and your comments always make me feel so happy. I enjoy it the most when you follow me along when I go overseas (to mostly Japan) and comment on my stories and the new things I’m eating and seeing. It gets me more excited and almost feels like I’m travelling with friends!

I have now developed a habit of extensively scrolling through Instagram for visual therapy during difficult times/after a long day, and bookmarking recipes and videos as I go along. I bookmarked a Tasty Japan video for Japanese Milk Bread some time ago, and when I quit my claims job and had a few days to myself at home, I decided to make the most of a hot afternoon and indulge in the ultimate test of patience – making bread.

I was really pleasantly surprised at how well this recipe turned out – and it made a perfect small amount of three bread rolls. I’ve promised Night Owl that I won’t make it while she’s on her current low carb diet, but it would be an excellent bread to have at the start of a dinner at ours the next time we have guests over, methinks.

If you’ve not had Japanese milk bread before, it’s a cross between the softest, baby-bottom white bread you have ever had, and a decadent buttery brioche. The intensity of the butter is carefully restrained to provide you with the maximum fragrance and aroma, but yet not so overwhelming that you don’t feel guilty slathering on a little extra butter while devouring. The kitchen will smell absolutely intoxicating when this is baking.

I used a small loaf tin for this, but in the video they use a cardboard one litre milk carton which would also work.

In a large bowl/bowl of a tabletop mixer, combine the flour, caster sugar, and salt.

Combine the milk and cream in a small saucepan and on the stovetop – or in a heatproof measuring jug in the microwave – heat until warm enough to dip your finger in.

Make a well in the centre of the flour mixture and pour in the milk/cream mixture. Sprinkle over the yeast.

Combine with a spoon or use a dough hook attachment with the food processor, mixing until it starts to come together. Add the 20g of butter, and knead lightly for a couple of minutes. Turn onto a lightly floured surface and knead until soft and supple.

Lightly oil the bowl you took the dough out of, and place the dough ball in it, lightly covering it with cling film and a clean tea towel. Allow to rest in a warm place for an hour.

When dough has doubled, place on a lightly floured surface and punch it down gently. Use a dough scraper to divide it into three or four pieces, wrapping each one into a ball. Place these back onto the bowl, re-cover and allow to rest for 20 minutes. 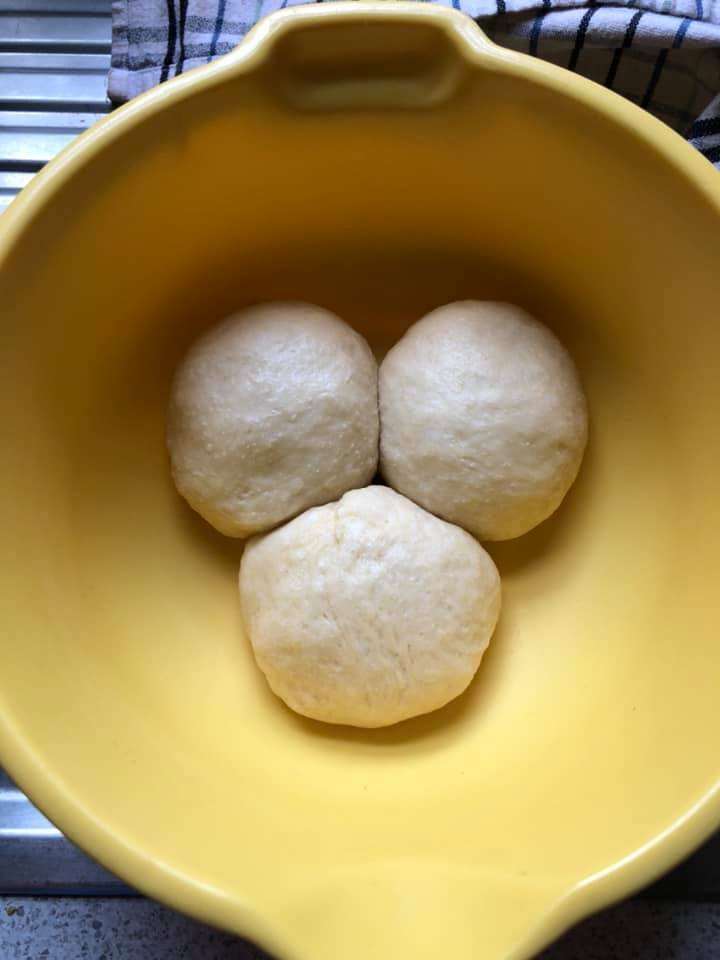 On a floured surface, roll each ball out into a long oval. With one of the short sides facing you, tuck the left and right sides in before rolling the rectangle from the bottom going upwards. Pinch the end to seal.

Lightly spray your loaf pan or milk carton (using a long edge as the lid). Tuck in the rolls, evenly spaced, and rest for a further hour covered with cling film and a tea towel until they have expanded. Preheat your oven to 200 degrees Celcius. 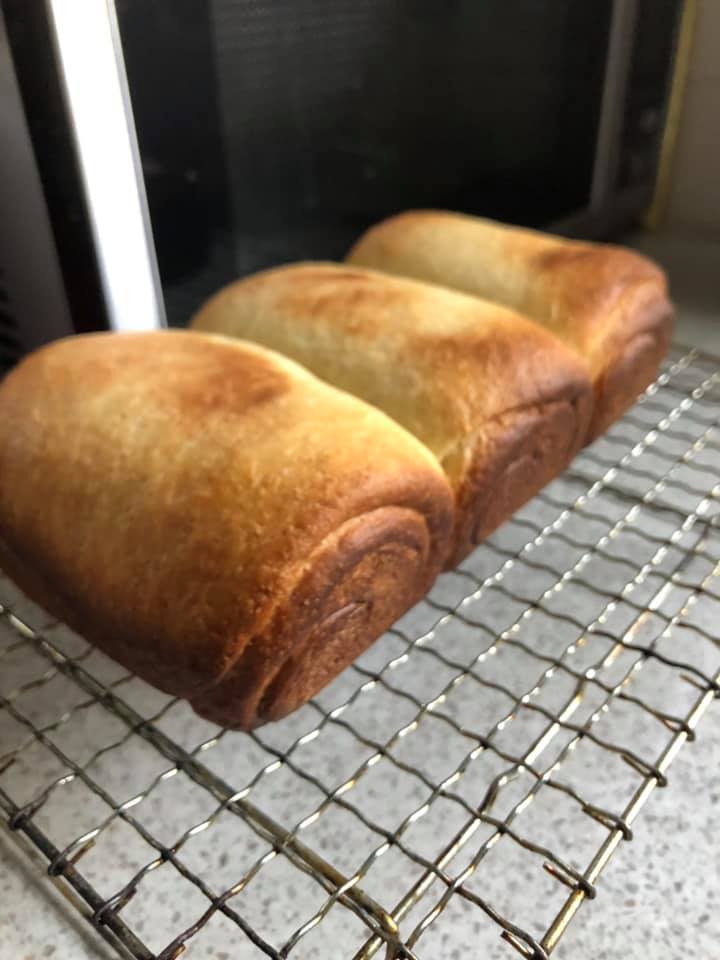 These little rolls are amazingly satisfying and moreish. They’re rich but not overly so – so you don’t feel too guilty about putting on a little more butter while you devour them warm 😉

I hope you’ve enjoyed my first blog post in a little while! I can’t make any promises as to if I’ll be back to posting with any amount of regularity, but if you’re keen to see more of anything please feel free to comment below.