I’m back from holidays and amused at how we went. Prior to starting the two week getaway, Night Owl and I had extensively discussed her crustacean allergy and how we were going to manage it during a visit to Vietnam, where neither of us were familiar with the language or the food. Vietnamese cuisine is often based on broths, sometimes derived from shellfish and crustaceans, and taking into account Night Owl’s tendency to react rather explosively, I was even thinking of buying an EpiPen for the occasion. Turns out I was the one to get ill from the trip, not Night Owl, and as a result its been three days since we’ve returned and I’m sitting at home sick writing this, away from work! A trip to the doctor this morning resulted in me being diagnosed with a “viral infection” – not the simple food poisoning I thought I had received on my last day. We live and we learn…

For the longest time I had thought that with Night Owl’s crustacean allergy that we wouldn’t be able to make it to one of my must-try venues – Sepia – so I was both thrilled and apprehensive when Night Owl walked me down the street on the night of my birthday and over to that subtle, minimalist chic entrance. There’s lots of mottled grey and black marble and dark, dark carpet and dark, dark walls, and a dark, dark ceiling. The waitstaff are also all dressed in black, the tables are black, but luckily there’s little moveable lamps on each table to enable you to see in all the blackness and darkness. I’m seated on a booth (also black) which is so soft that I immediately sink down and wonder how I’m going to get out at the end of the evening.

Service is a little… how do I put it? Cold. It’s not an uncommon occurrence from time to time, but I’m disappointed when I encounter it during fine dining. Regardless of whether you are young or old, well-dressed or not, we have made a booking and so we clearly know what we are in for, including the price tag at the conclusion of the meal. Anyway, this was not the case for all of the waitstaff – only one or two in particular – however it did put a dent on the evening from the very start and as it progressed.

The wine and drinks list is dizzyingly extensive and confusing, but with some assistance we elect to go with the “part-pairing”, being one drink for every two courses. Neither of us wanted to be too sloshed by the end of our evening. Our drinks ranged from a Katsuyama ‘En’ Tokubetsu-Junmai sake from Japan to a 2015 Serge Dagueneau ‘La Centenaire’ Chasselas Pouilly-sur-Loire from France. Every single beverage was delicious, and both of us were very impressed at the skills of the sommelier for perfectly matching each drink with its corresponding two dishes.

Anyway, I’m sure you are wanting to see some photographs. We started with two delicious Sydney Rock oysters each.

Moving onto the tasting menu, I was slightly awestruck when the waitress laid out all of the elements for the first course. 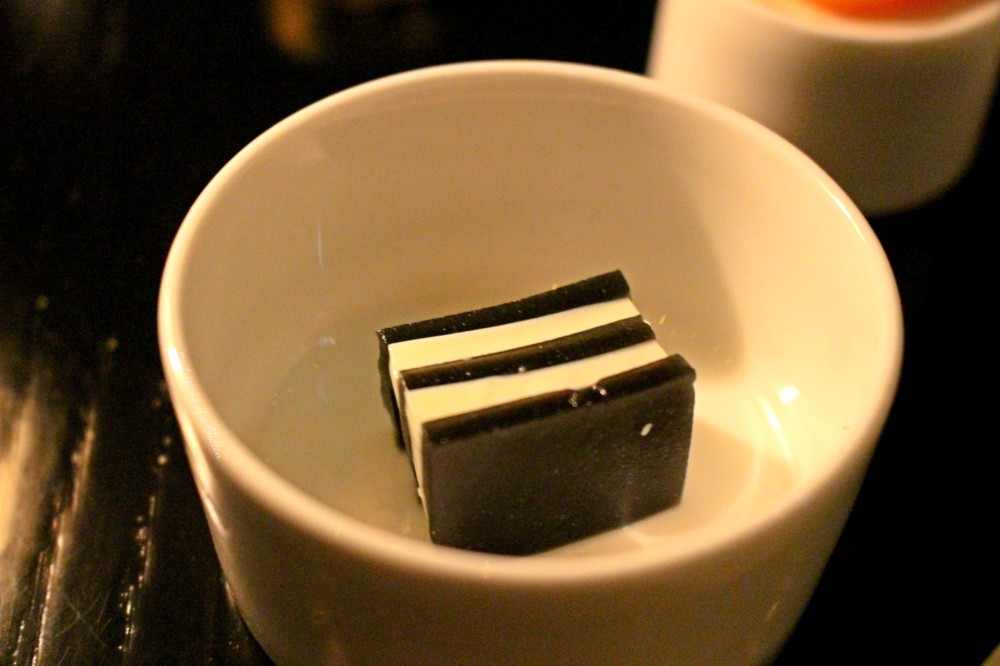 There was a Saikou salmon, smoked roe, sudachi, chrysanthemum pearls; Bonito, dashi cream, purple yam, linaria; Tempura oba, smoked ama ebi, shell powder; Toro, yuzu kosho and olive oil emulsion, parsnip, nori, ponzu, and Egg white tofu, smoked eggplant dashi. My favourites were the Saikou salmon (the orange orb), the Tempura oba (the fried leaf), and the Toro (the little cylinder of nori). Each was a little mouthful explosion of flavour and incredible. I was already overwhelmed at the start – what would come next?

Bluefin tuna is the beef of the sea for me, and I was thrilled to see this little delicate parcel of Tuna, egg yolk, fromage blanc, tosa soy sauce, wasabi. Split the tuna open with your fork to reveal the gorgeously runny insides! 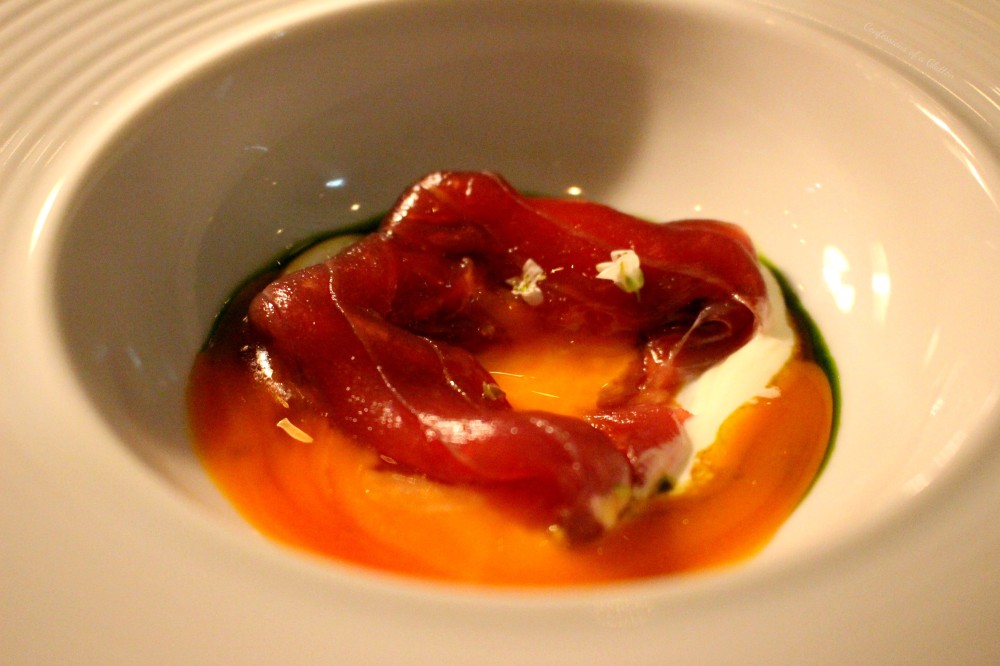 There’s something so delicious about the combination of egg yolk and sashimi – I don’t know why.

My next dish was the Spanner crab, brown butter emulsion, sake vinegar jelly, pea and horseradish, accompanied with a surprise blast of freeze-dried pea powder when it arrived at the table. The spanner crab tasted as though it had been cooked in a pat of butter equal to its size and was wonderful.

We had given the restaurant a heads-up on Night Owl’s allergy, and they were more than happy to accommodate it with an item that looked to be from the vegetarian menu – an intriguing looking beetroot and goats cheese concoction that was both sweet and earthy, and uniquely textured. It looked like a little pile of volcanic soil. 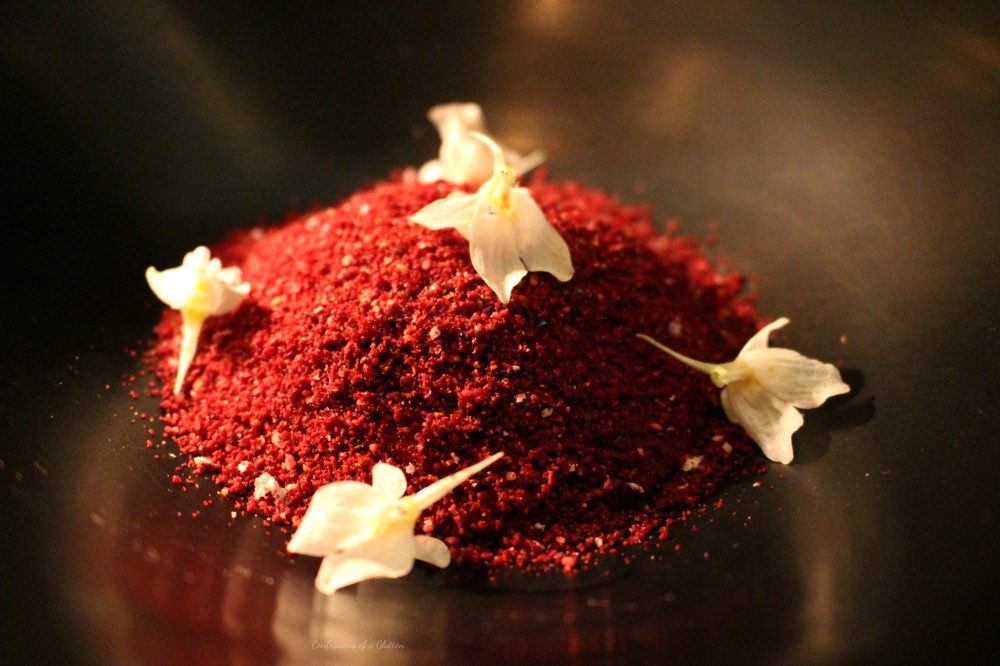 The following dish was the Charcoal black lip abalone, roasted onion and mustard, sweet onion dashi, kabu ice plant, chicken skin. I haven’t knowingly had abalone before (knowingly as in I don’t know if I ate it at one of the Chinese banquets I attended when I was so young I didn’t know what I was eating), and I found the chewiness of it interesting – it was lightly smoked and almost bacon-like in flavour. It was a very sweet little dish, mostly from the roasted onion and dashi, reminding me of a French Onion soup. I didn’t care much for the foam – I’ve never really been a foam girl.

The Dashimaki tamago, uni, koshihikari rice, smoked marrow, okahijiki, sobacha was an absolute delight. I’ve heard some people complain that what Sepia lacks about the element of Japanese cuisine is the larger portions of proteins, and I remember visiting Tsukiji Fish Markets and menus advertising for huge bowls of rice layered generously with uni (sea urchin roe). However I felt that in this case, the measured, small serving was perfect for showcasing the rich smoothness of the uni, which went immaculately with the nuttiness of the rice and smoked marrow.

The next dish of Sansho roasted duck breast, quince and sheep yoghurt cream, pink lady apple shiso was cinematic in presentation. The pink lady apple had been shaved so skillfully that it draped over the slice of duck in luxurious waves, yet still retained its crisp and tart tang. The duck was tender, fatty and popped with flavour.

Moving onto the last of our mains, the Charcoal grilled lamb breast, nameko mushroom, buckwheat roasted garlic and miso emulsion. The lamb was pulled into tender strips of meat, and went wonderfully with the meaty mini nameko mushrooms. It was a heavier dish to finish off the mains, and when I finished it I examined the black “soot” on the plate, tasting it and surprised to discover that it was very sweet. Each of the elements on all of the dishes had been thought out to the nth degree.

We both have a breather and bathroom break in between, anticipating our dessert. For a little palate cleanser, we are delivered the Dai dai and kabosu tart, salted white chocolate, passionfruit, muscovado sable. Deliciously tart – see what I did there? – and a refreshing little mouthful. I would have been quite happy just having that for dessert!

We chose alternate desserts so as to not double up. Night Owl had the Jerusalem artichoke, Pedro Ximenez infused dates, ginger milk, soy chocolate mousse ginger bread crumb, which arrived perfectly shaped but with my continuous photograph-taking started to melt! I had a bite but was more absorbed in my dessert when it arrived.

I was pleased and very thankful that we had the opportunity to visit before they moved to Melbourne. I chatted to one of the waitstaff as we were leaving as to the timeframe of their move, and he told me that while they were anticipating it would be around Easter next year, they had not yet been successful in finding an appropriate location for the venue. So there may be some more time yet for those of you who would like to experience it!