I had a bit of a meltdown a couple of months ago.

One evening at home – I can’t remember if it was in the kitchen or snuggled up on the sofa watching Netflix – but in any case it was after dinner, I asked Night Owl that age-old question of “What would you like for dinner tomorrow night?”

She responded with: “I don’t care.”

I looked at her in horror; she didn’t care?! At my mortified expression, she quickly corrected herself so say: “I mean, I don’t mind“, but the damage had been done – I couldn’t believe that someone would say that they didn’t care about what they had for a meal.

Food for me is based on careful planning and thought – a weighing up of my cravings at the time, what I’ve had in the last couple of days, what options I have available to me, whether I should be eating the healthier option or whether to toss that idea out of the window. I will admit that there are the occasional days where I can muster up the effort to make dinner, but the thought process of having to think about what I can make out of what is in the fridge is just too hard.

This is where Marley Spoon comes in.

Marley Spoon is a food service which aims to help make weeknights easier and dinners healthier and more delicious. Marley Spoon comes up with the recipes, you choose what recipes you want to cook and eat that week, and they send you a box of measured and portioned out ingredients right to your door. Every recipe is carefully tailored to use seasonal ingredients to best promote fresh flavours, and Marley Spoon also partner with small-batch producers when they can, helping out local and artisan businesses who focus on sustainable farming practices.

I’m invited to try out and review the service, so I select two meals to have delivered to my office. Taking the box home, I open it up to reveal the paper bags containing the basics of the two meals (vegetables, pulses, canned vegetables), and an ice pack containing the meat and perishables. There are some ingredients which you will need from your pantry such as eggs, salt and pepper, olive oil, etc, but these are disclosed when you select the recipe. There are full-coloured recipe-cards packed into the box, with step-by-step photos of how to cook the meal.

I make the Chorizo and Tomato Stew first, which is full of punchy flavours and chock-full of vegetables. I’m impressed with the quality of the chorizo that comes with the box, and the stew makes enough to serve four. While not particularly complex in flavour, it’s homely and incredibly comforting. 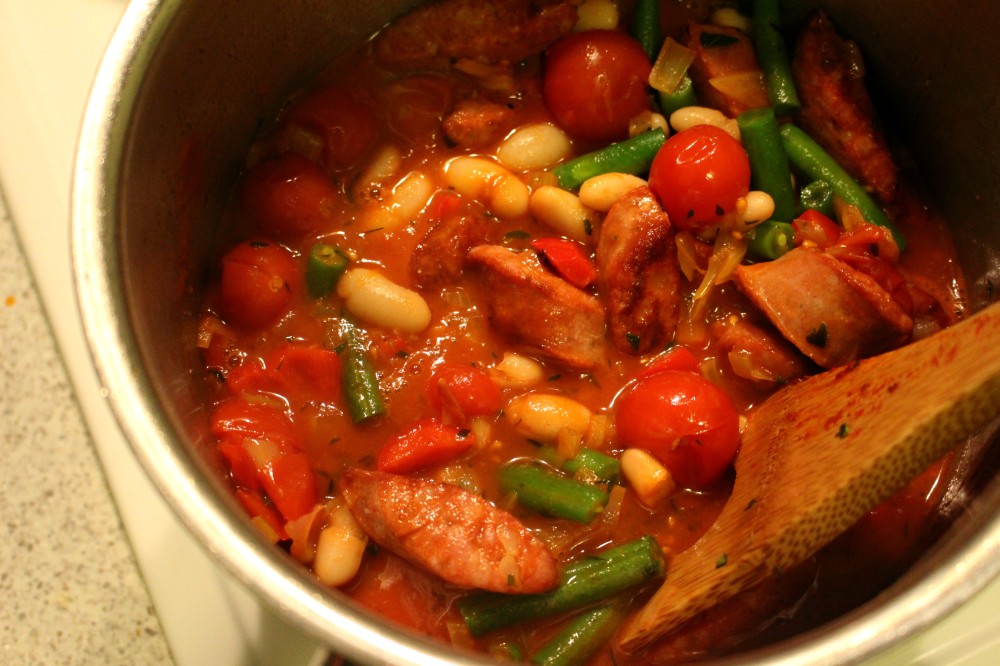 Pleased with my work with the first meal, I decide to give the second meal a shot: Lamb Polpette with Tomato and Spinach Risoni. I was very happy with how this turned out – full of more vegetables and packed full of more comforting flavour and textures.

I’ve never been a fan of celery. I know that it’s a base for bolognese sauce but I always leave it out (and I can’t be bothered to buy a whole bunch of celery to use just one stick). It came with the pack though, so I tentatively decided to use it – thinking that if it was cooked down maybe I wouldn’t be able to taste it so much.

It was amazing! I couldn’t taste it at all even though the celery didn’t cook down as much as I had been expecting. Instead, it added a lovely “crunch” factor in the soft risoni, and had absorbed the flavour of the tomatoes. I imagine that this would be a very popular recipe for those with kids – and with the risoni it means no messy twirling of spaghetti!

I’ve posted the recipe from Marley Spoon below, with some slight editing of the order of the recipe card as I did find it a little confusing to follow in some parts.

Heat half of the oil in a large, deep frypan over medium heat. Add the onion, garlic and celery, and cook, stirring, for 6-8 minutes until softened. Season with salt and pepper. 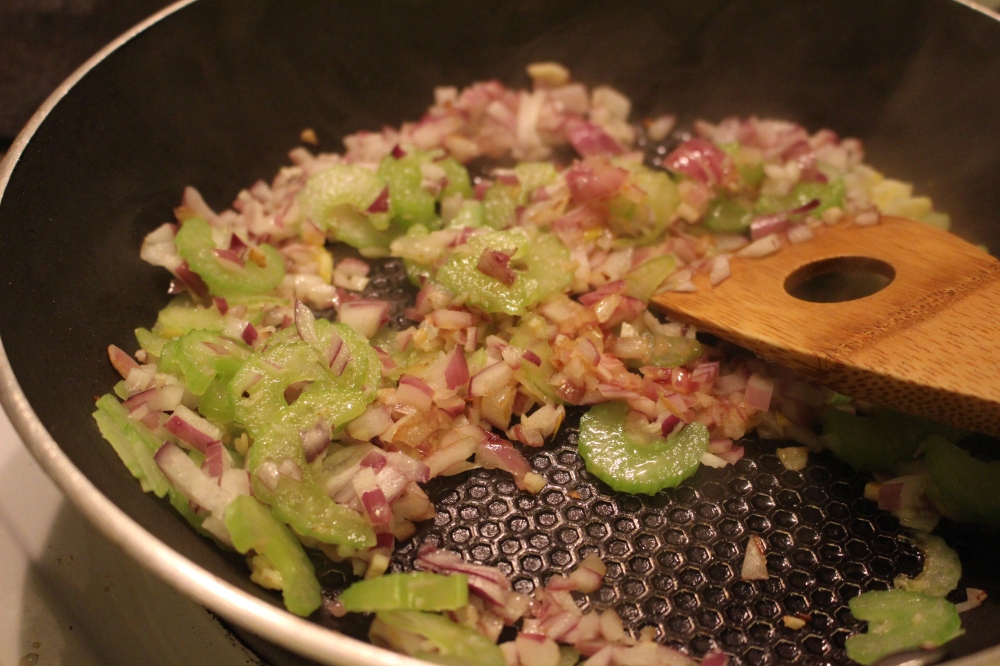 Add the diced tomatoes and sugar to the onion mix in the frying pan, bring to the boil. Add the risoni and half the boiling water (one cup). Stir gently and cover with a lid, simmering for 7 min. Stir occasionally to prevent risoni sticking to the base of the pan.

Combine the grated carrots, half the parsley and the lamb together in a large bowl. Season with salt and pepper before rolling into golf-sized balls.

Heat the remaining oil in a large frypan over medium heat. Cook the meatballs, turning, for 8 min or until golden brown and cooked through.

Add the baby spinach to the risoni mixture and cook, stirring, for a minute or two until wilted. Divide among bowls, scatter over the remaining parsley to serve.

For more information on Marley Spoon and to scroll through their selection of delicious recipe boxes available, click here. 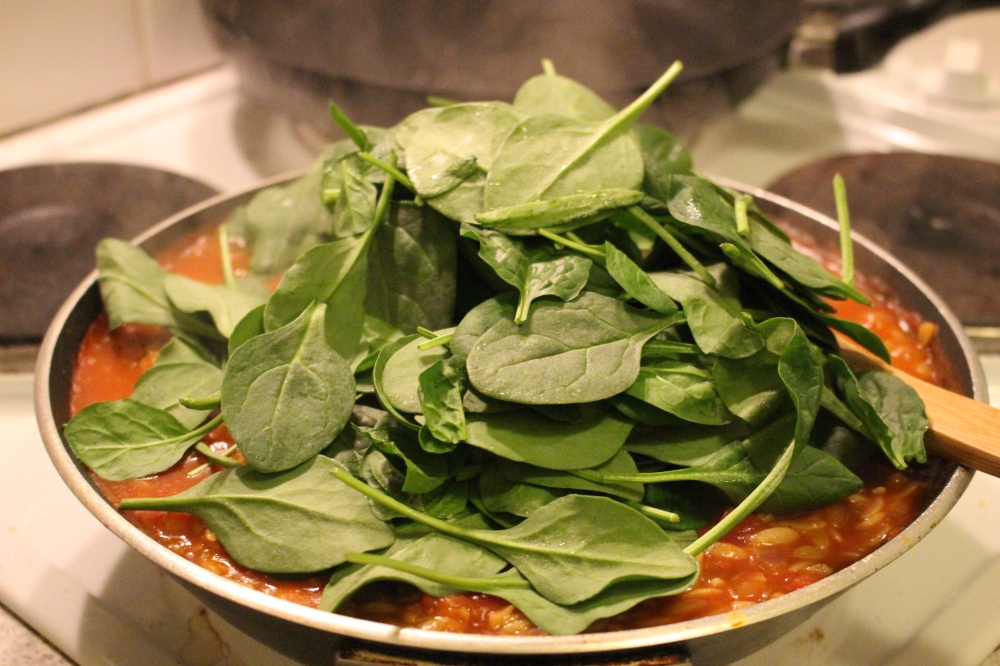