You all know by now that aside from our regular 9-5 weekday jobs, Night Owl and I both engage in side jobs; Zumba for me, and bartending for her. She’s been working at Enmore’s The Gretz now for over a year –  on and off – even though she’s moved from Enmore to across the Bridge to join me in setting up our home in the lower Northern Suburbs. We used to linger a lot more around Enmore Road and Newtown in our first year of dating, and were bemused to see many new restaurants, cafes and bars pop up soon after she made the move. We promised each other that we would return for the occasional date night, as sometimes we find that dinner options in the CBD are either scarce or overpriced.

It was last year that I heard through the foodie grapevine that the guys behind Porteno’s had opened up a new joint on Enmore Road, at the Marie-Louise Hair Salon – Stanbuli, a Turkish restaurant with the gorgeously retro store facade. While the outside is painted in wonderful vintage shades of pink and purple, the interior is very modern with black and white tiling, bar seating and seats along the wall in a single row on the bottom floor. I do believe there’s regular table seating upstairs, which would be more preferable to those dining with more than one other. With the hard surfaces and high ceiling, I’ve heard that it can get very noisy in the restaurant, however it’s a quiet Wednesday night when we come by (the best night for date night) and we are immediately looked after, perching at the bar.

It’s not every day that you celebrate a year of living together in domestic bliss, so we splurge on a bottle of wine. I’m usually not a fan of rosé – Night Owl aptly calls it the “bisexual of the wine world” – but concede that it will go with most of what we will be eating. We ask the bar staff for recommendations, and select the Sulva Merlot – Karasakis 2015from the Gallipoli Peninsula. It’s surprisingly dry with savoury notes, yet still very clean and mildly sweet. It was the best rosé both of us had ever tasted.

I start by ordering the Patlican ($14), a smoky eggplant salad with garlic, tomato and parsley. Our waiter recommends that we order it with some Ekmek ($8), the house village-style bread, with Cypriot-style marinated olives. When it arrived, I could see why as the Patlican resembled more of a dip than a “salad”. 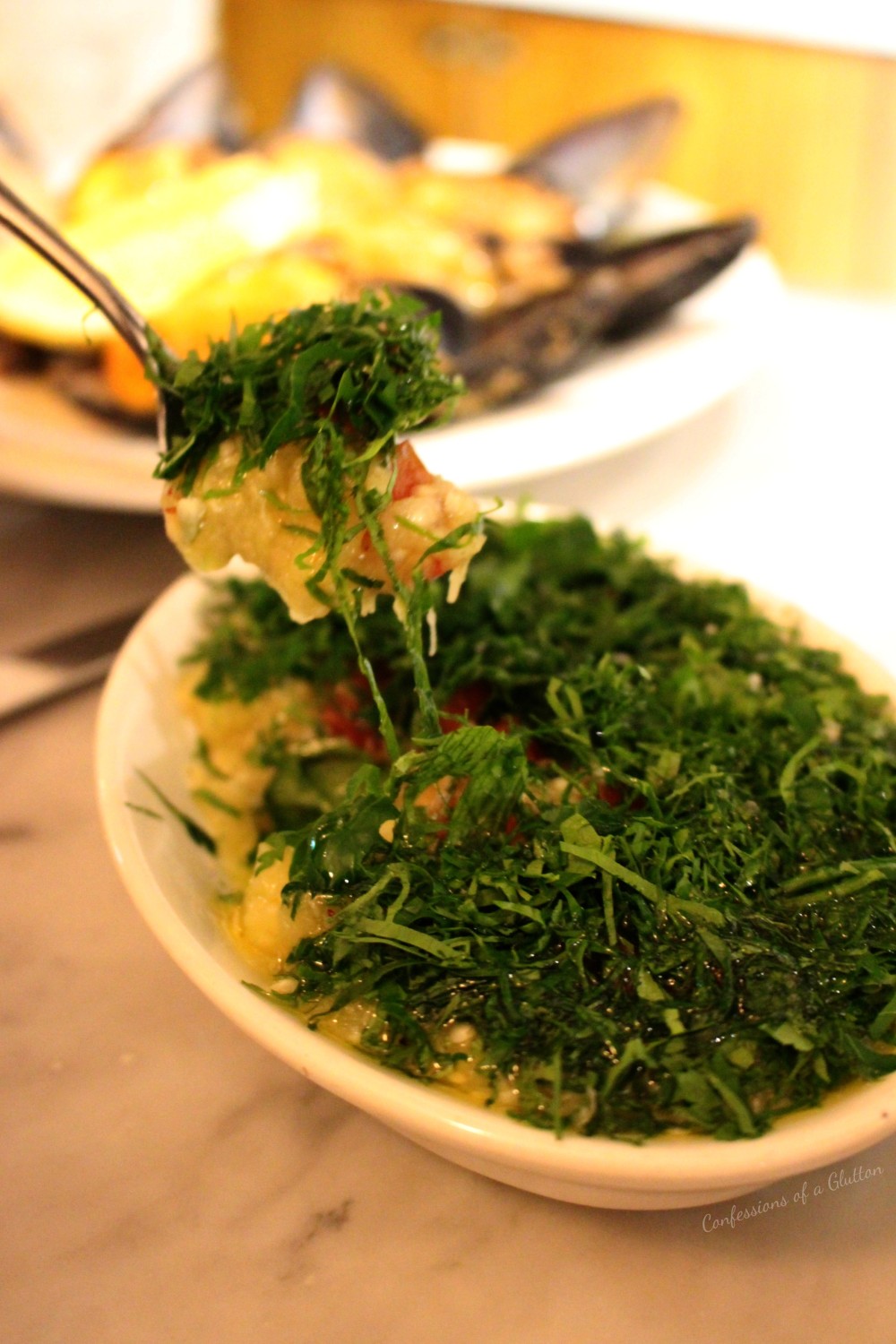 The bread was beautifully soft and warm. Top it with a generous smear of the smoked, whipped fluffy butter and into the eggplant salad and I could be very happy eating this all day. The olives are subtly spicy, moreish with small pips. I was a little quizzical as to why we two girls got two slices of bread while other couples I saw got double the amount in their baskets, but didn’t press the issue as we had more food coming.

Reading reviews, I was told that I should not go past the Midye Dolma ($3 each), or stuffed mussels. While Night Owl is “occasionally” allergic to crustaceans (by “occasionally” I mean she has had bad reactions to yabbies, lobster and fresh prawns in fine dining restaurants, but is strangely enough fine with prawn hargow, sui mai and vermicelli rolls at yum cha) and is not wild about shellfish, she does want to try the mussels and so we order a plate. These street-style mussels sit atop a small mound of spiced rice. The mussels are amazing and meaty – so delicious! I could have ordered another plate of these.

With great curiosity I had ordered the Manti ($16), potato dumplings filled with ground beef, onions and parsley with garlic yoghurt and paprika butter. These for me were a little too thick-skinned and the ground beef a little dry.

I had ordered one of the charcoal items, being the Adana Kebap ($20): hand-minced lamb belly and shoulder kneaded with chilli, capsicum and salt, cooked over ironbark and charcoal with beetroot yoghurt. 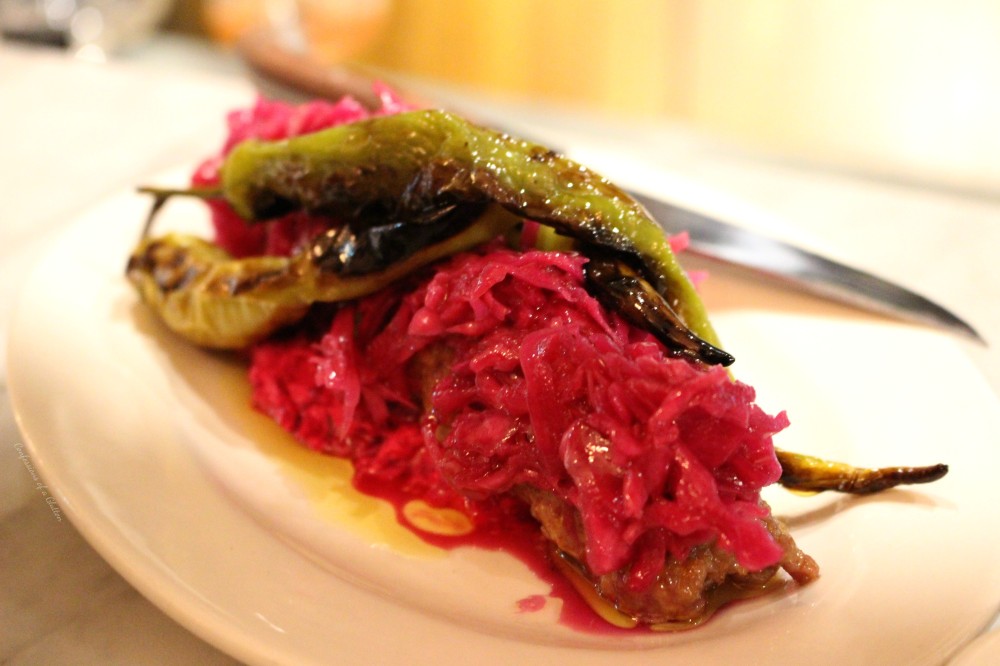 The beetroot tasted lightly pickled in flavour, and while the kebap was tender, it lacked a lot of flavour and I had been expecting a lot more smokiness from a meat cooked over charcoal. It was delicious though when I combined it with the garlic yoghurt from the potato dumplings and the smoky eggplant salad. It was a little disappointing that it wasn’t as smoky as I had been hoping, considering Porteno’s specialty, but maybe I had ordered the wrong dish.

We had originally been intending to head up the street for dessert gelato at Cow and Moon, but it was very cold outside and so we decided to continue off the menu instead. To finish on a sweet note, we ordered the Tahini Parfait ($14): Tahini Helva parfait with vanilla cream and Turkish coffee ice cream. It was a beautiful, subtly aromatic dessert and that Turkish coffee ice cream blew us both away. It was the perfect dessert to linger over while finishing off the rest of our delicious wine.

In conclusion, I’m not entirely sure whether the prices on the food menu are justified, as while Stanbuli do very good food, it wasn’t the standard of what I was expecting from Porteno‘s, and there’s so many casual Turkish and Middle-Eastern street-food vendors all up and down Enmore Road doing similar things, albeit in a cheaper, takeaway style.

Having said that, Stanbuli is a wonderful place to linger over a few small plates for dinner, and it’s great to see the diversity of wines on their list. I never would have picked a Turkish rosé for being one of the best wines I’ve ever had in my life, and I will definitely be returning for some more of those mussels and that eggplant salad.