It’s supposedly 18 degrees today but with the sideways rain it’s feeling more like 9 degrees. The secretary at my work has had the worst luck of booking a Vivid light show cruise – for those not in Australia, Vivid is a two-week long event when Sydney city puts on their flashiest light shows and displays in an attempt to entice people out in the heart of winter. I don’t mind the crisp mornings so much, but it’s the bitterly cold, windy and drafty nights that I can’t stand….where you go to sleep with the sniffles and then groggily wake up to that dreaded feeling of an itchy throat and sniffly nose….

My mother used to make this soup for my sister and I whenever winter came around, one of us had a cold, or we simply needed to get some red meat into us. She does her version a little differently with a Chinese spice packet, but my sister found a YouTube video recently and forwarded it to me. Despite my limited Mandarin, I was able to jot down the ingredients and their relative amounts before attempting the recipe on my own. I’m almost getting too used to following a recipe by the book, so I will admit that seeing someone free-pour soy sauce and wine makes me a little anxious – particularly when I don’t fully understand what they are saying! But my soup turned out beautifully and I’ve had it more than a couple of times these last months whenever I’ve felt those ghastly sniffles creeping up on me. It’s a huge bowl of braised goodness – deep dark notes of soy spiced with ginger, chilli and bean paste, the kick of chilli eased slightly with some rock sugar, and those tender pieces of chuck steak. Some recipes will tell you to add the soy or bean paste towards the end of the braise, but it’s actually better to add it towards the start to allow the flavours to cook off and develop. The daikon radish does take a little while to cook through (imagine it like a potato), perhaps about 30 minutes to an hour. This is definitely not a soup to rush while making. 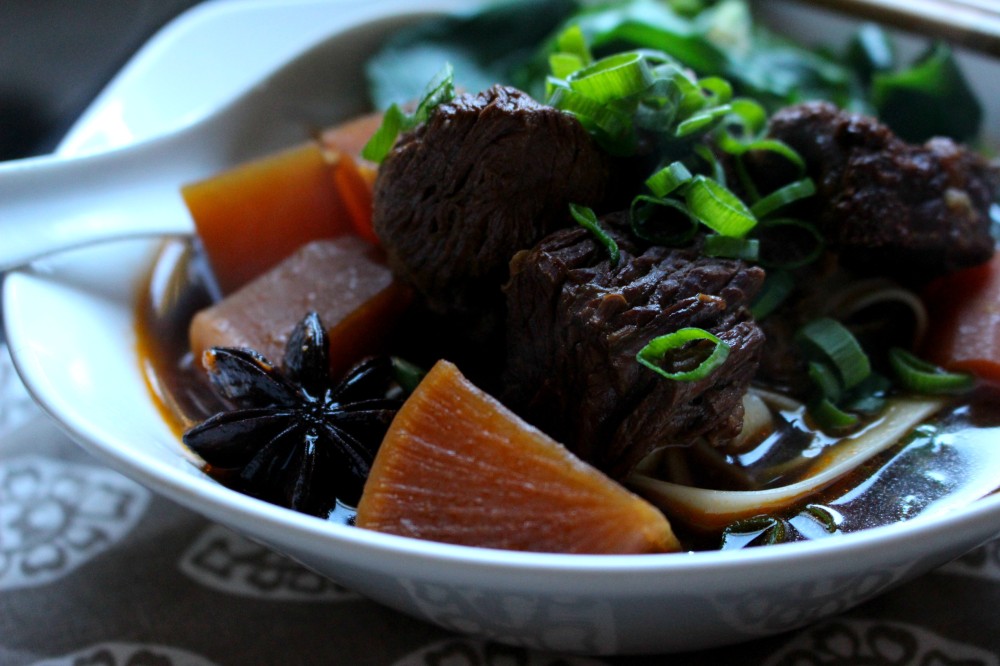 To serve four to six, you will need:

4 spring onions(shallots), whites separated from the greens, plus extra to garnish;

1/2 kilo of daikon radish, peeled and chopped into 2cm pieces;

Place the chuck steak in a deep, thick-bottomed saucepan and cover with salted cold water. Bring slowly to the boil over medium heat and simmer for 10 to 15 minutes, skimming off the impurities. Drain the water off, rinse then remove the beef and allow to cool. Cut the chuck steak into 2-3cm-sized cubes. 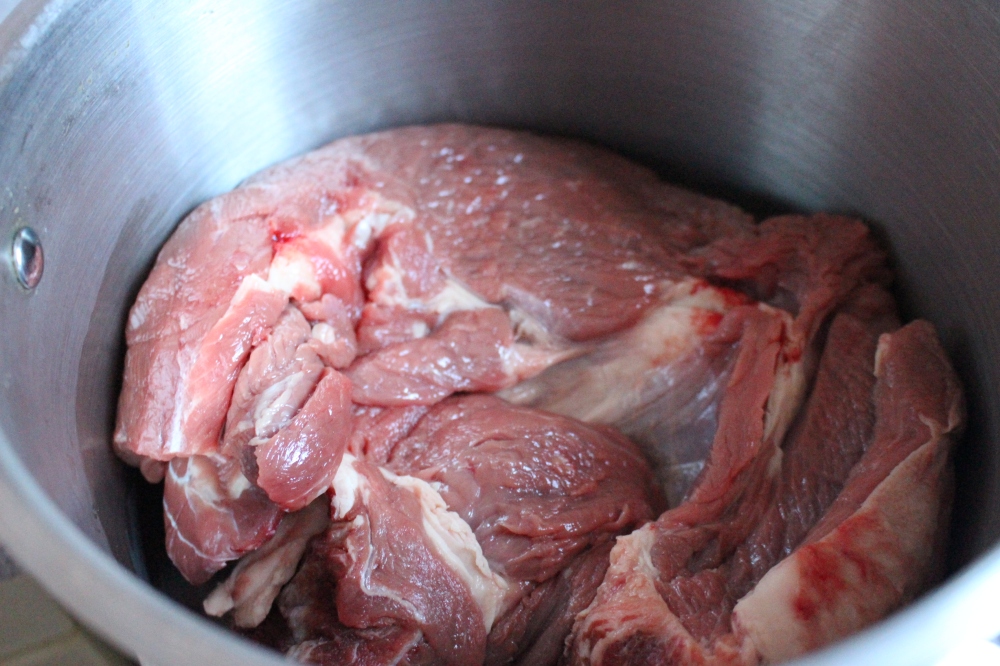 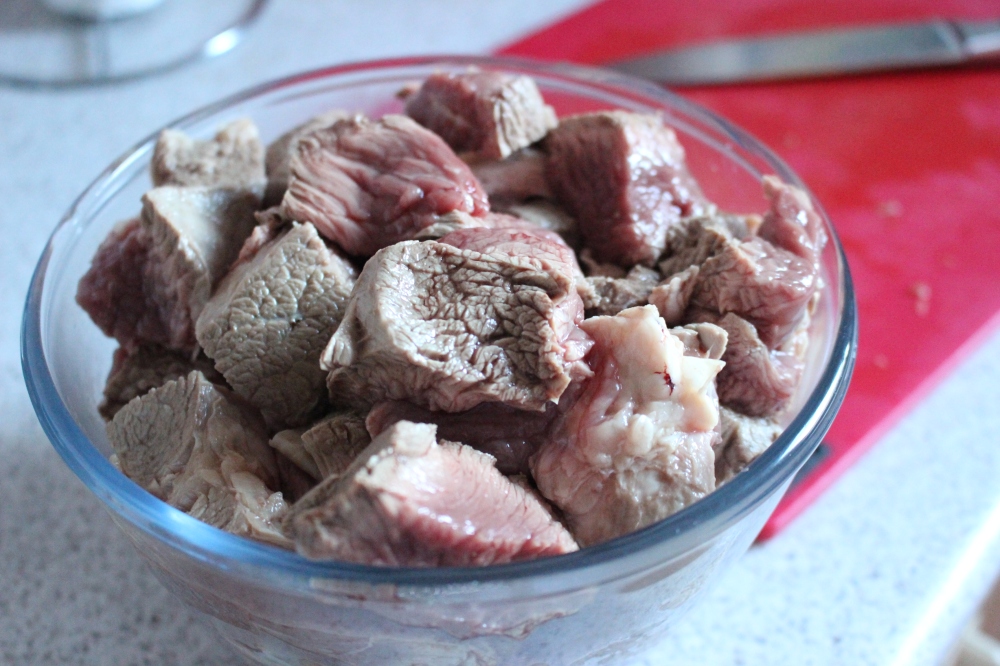 In a hot, oiled wok or frying pan over high heat, add the white parts of the spring onions, ginger, and chillies. Stir fry until aromatic (it will smell absolutely incredible), then add the two star anise and two tablespoons of the peppercorns. Add the chilli bean paste and fry it off for a minute or two before adding the soy sauce. Stir to combine before adding the rock sugar, then finally the beef. 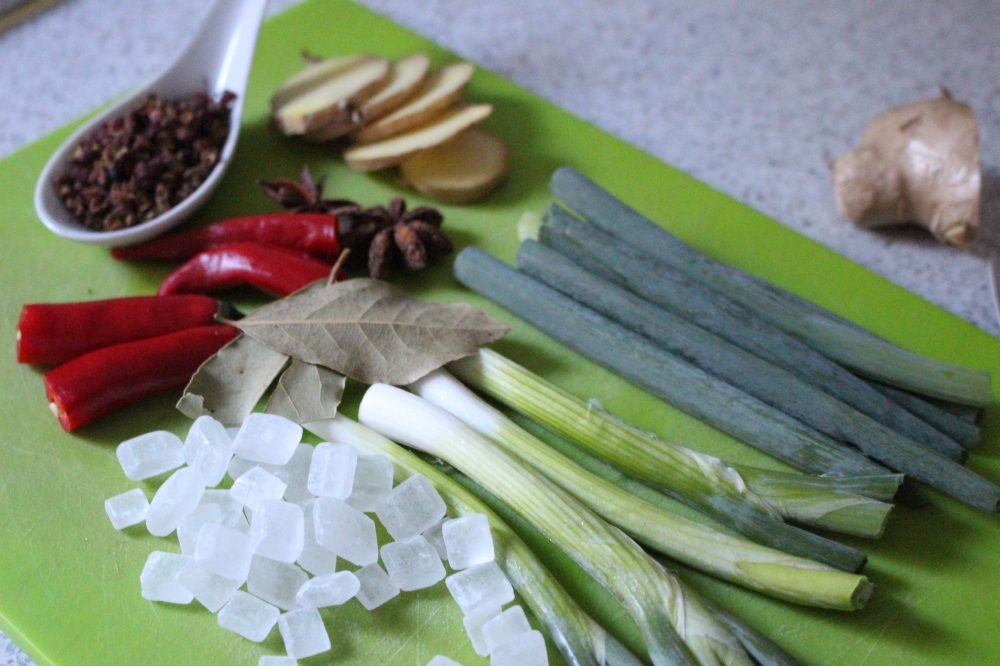 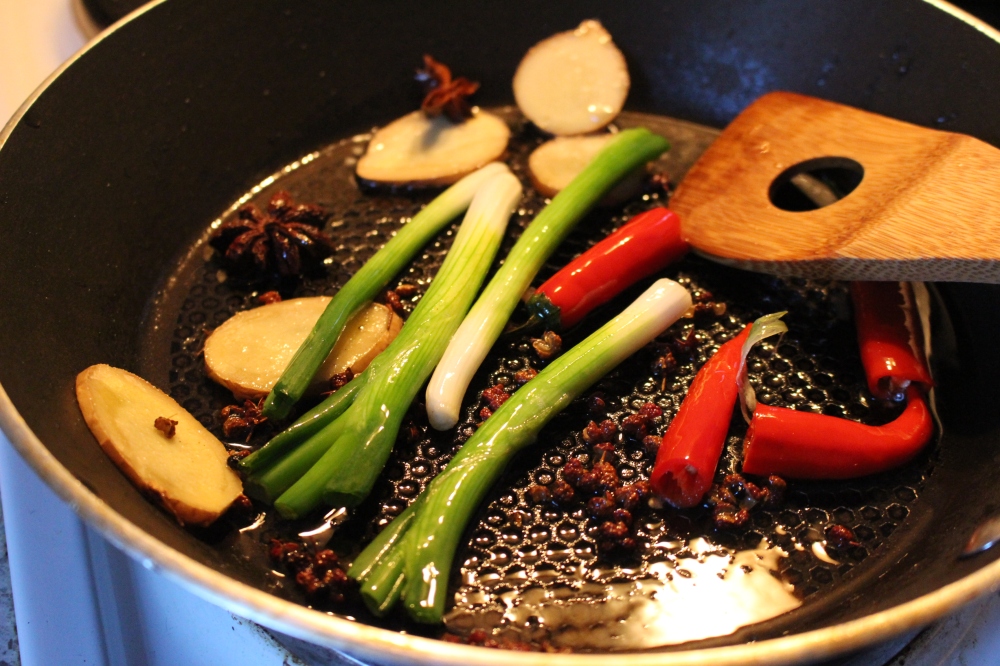 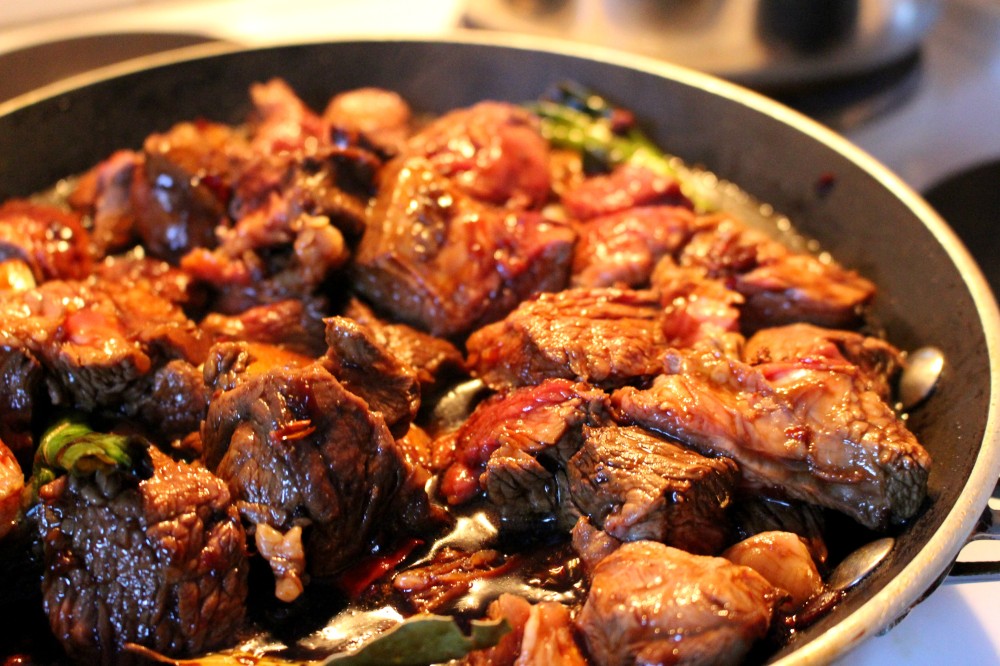 Bring a large 3L pot of water to the boil (ensure you have enough of a space between the water line and the top of the pot), and add the shallot greens to the water with the remaining peppercorns and the tomato paste. Carefully add the beef mixture to the water before topping with the rice wine and bay leaves.

Place on the lid and lower the heat down to medium low; cook for 40 minutes. Raise the lid, stir and add the cubed daikon radish pieces, then place the lid back on and cook for a further hour or until the meat is tender and the radish is amber in colour and can be easily pierced with a skewer. 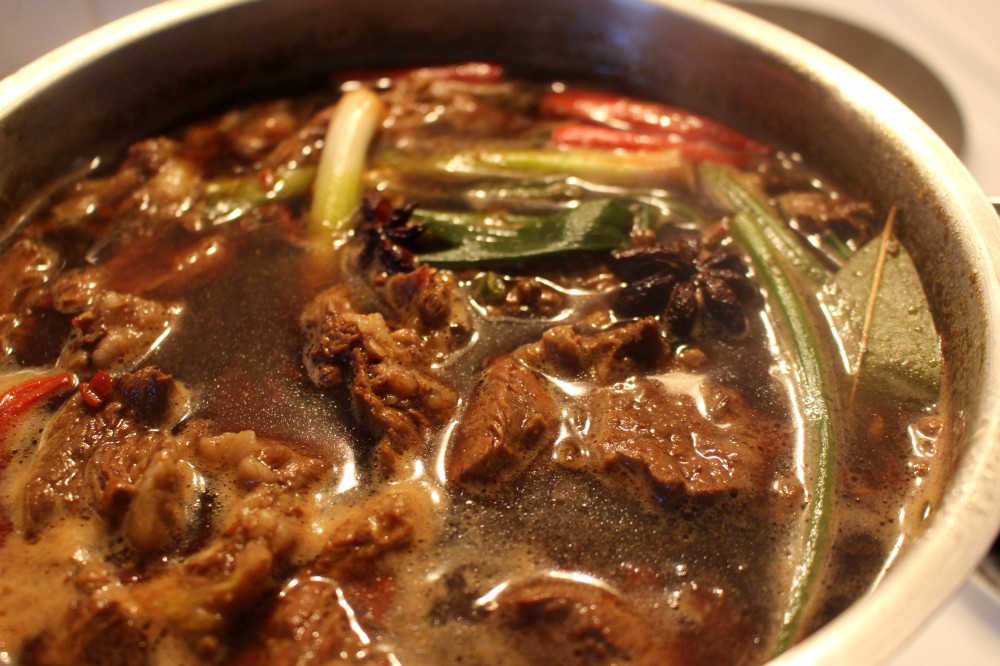 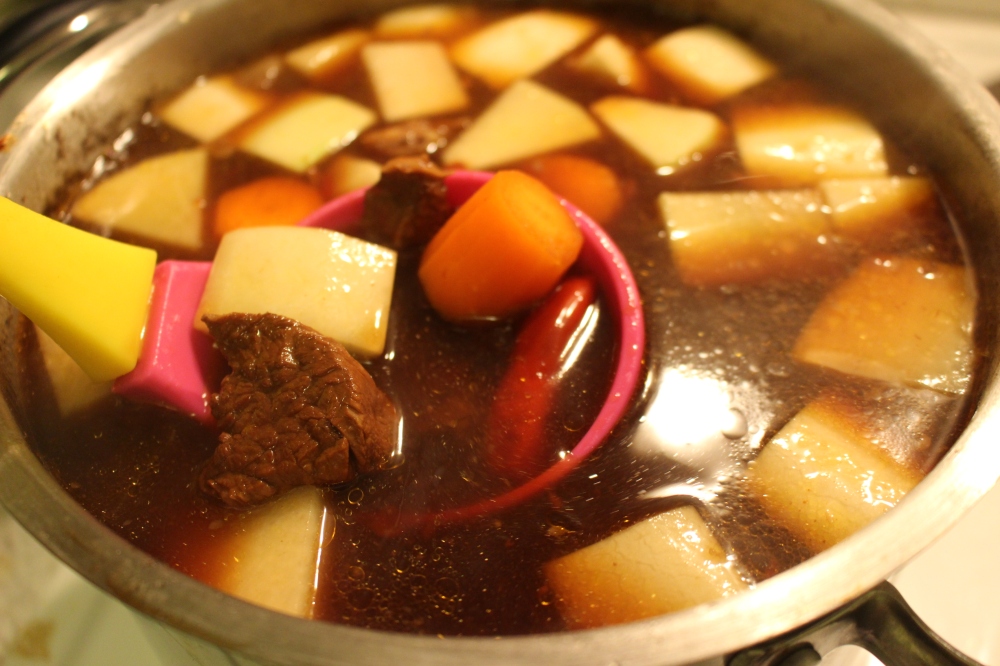 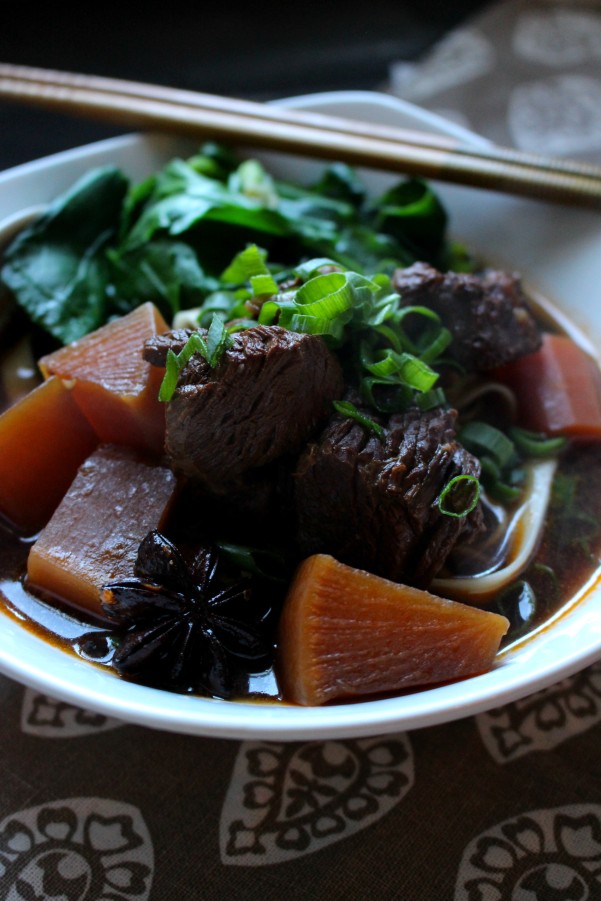