You will probably be horrified to hear that at my place we have two entertainment subscription services – not just Netflix, but also Stan. Netflix is under my name, and often I’ll watch episodes of Jessica Jones or Mind of a Chef while doing my thing in the kitchen, while the missus has Stan and is mowing through Seinfield and Will & Grace episodes as she does the laundry and does the weekly cleanup of her “floordrobe”. We do have the shows we watch together – and after painfully finally finishing the last episode of Marvel’s Iron Fist, we move back onto our guilty pleasure show: RuPaul’s Drag Race.

If anyone I know is wondering how I’ve recently developed a vocabulary which involves a lot of “gurrrrrrrl” or “sashay away”, now you know why. I love transformation shows (whether it’s someone’s appearance, fashion style, living room, garden – you name it) and the styles and couture fashion on the show, particularly that of RuPaul is mesmerising. In the second season the girls were challenged to sell cherry pie vouchers on the street to unsuspecting punters, and when I flipped through my new copy of Valli Little’s My Kind of Food, I couldn’t help but cackle to myself when I saw her recipe for Cherry Pie.

As food director of the popular and influential delicious. magazine, I was very interested to see Valli’s most personal cookbook yet. I wasn’t disappointed. The book consists of 100 recipes that she has regularly cooked herself whether it’s for family midweek meals or lazy Sunday suppers, slow-cooked recipes for you to come home to after a hard day in the office, or superstar dishes to wow dinner guests. Beautifully photographed, it’s a nod back to the styling of her signature magazine. I’m also thrilled to see that it’s not uber healthy – a trend many cookbooks have followed in the last year or so with their kale chips and spiralised vegetable salads.

Anyway, back to the PIE. This is a wonderful flaky pastry recipe – what emerges is a pastry that tastes like a combination of shortcrust and puff pastry yet doesn’t require the awful folding and re-folding that puff pastry involves. While some may cringe at the mention of lard, it’s much more of a natural animal product than butter but it can be very difficult to handle at room temperature! Using lard gives the pastry a much lighter flavour and texture – just make sure to keep it as chilled as you can! It was such a delicious pie with the sweet and sour cherries, and the recipe is so matter of fact in that it uses jar morello cherries and frozen cherries – I’ve seen too many cherry recipes that request at least half a kilo of fresh cherries (rolls eyes).

By the way – I purchased a 670g jar of morello cherries (the only size available), thinking that I would have more than enough than the recipe requested (420g), however when I drained the juice I was mystified that I had about 350g of cherries left over. Add that to the fact that frozen cherries only came in packets of 500g, and so I was 100g under the amount the recipe requested. So it may be a bit touch and go depending on the size and brand of cherries you get. Don’t panic though -I decided to just work with these amounts as it was later in the evening and I couldn’t be bothered to go to the shops again – and the recipe turned out wonderfully!

Also…this pie is AMAZING for breakfast! 😉 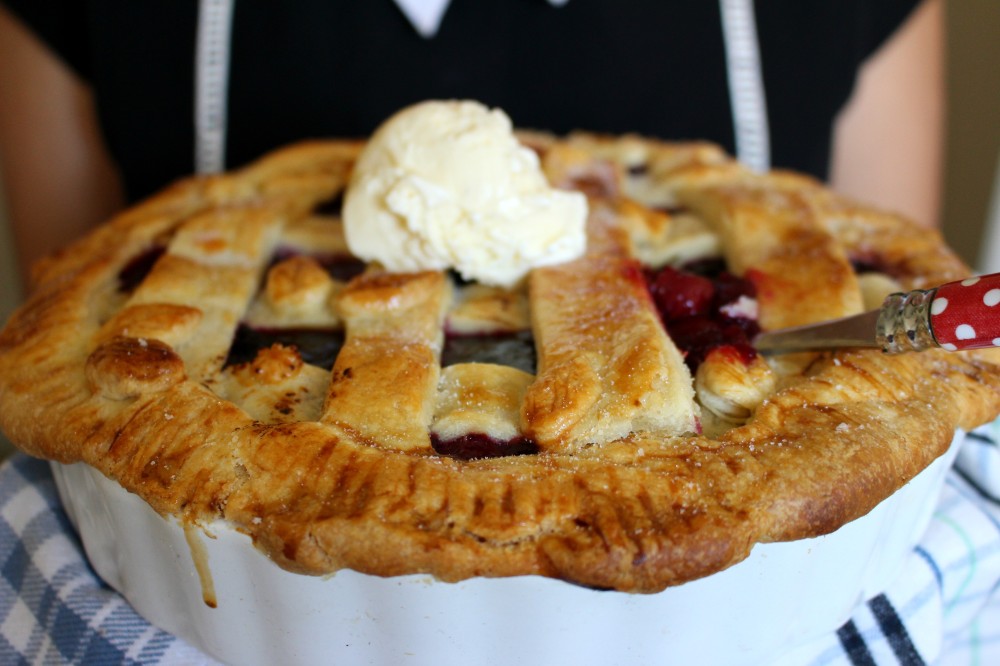 For the pastry, place the flour, icing sugar, butter and lard in a food processor with 1/2 teaspoon of salt. Pulse a few times to coat the butter in the flour. You will still have some big lumps of butter in the flour, as this will ensure a flaky pastry. Add the vinegar and 3/4 cup (185ml) iced water, and pulse until you have a crumbly mixture. Tip onto a clean work surface and bring the pastry together with your hands. Divide the dough into two portions making one slightly larger than the other. Wrap in plastic wrap and chill for one hour. 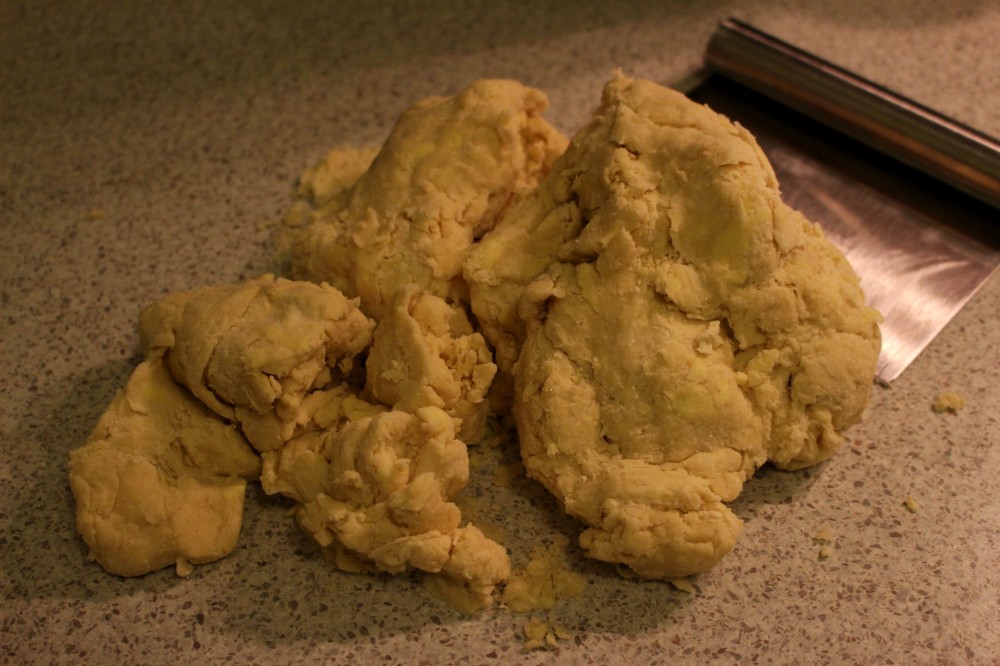 Drain the morello cherries, reserving 1/3 cup (80ml) of the juice. Mix the reserved juice with the cornflour to form a paste, set aside. 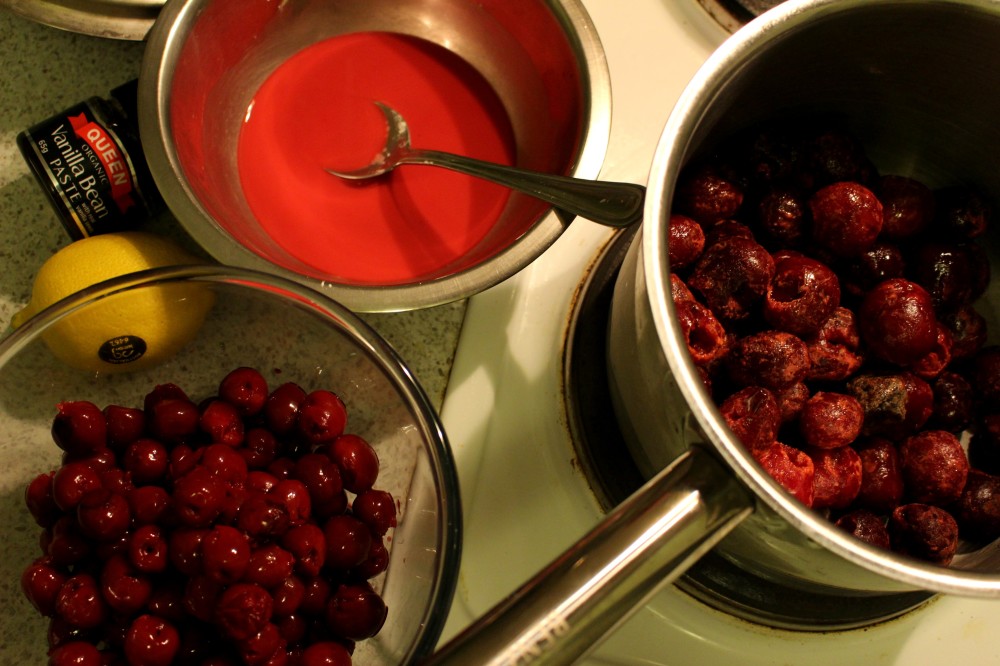 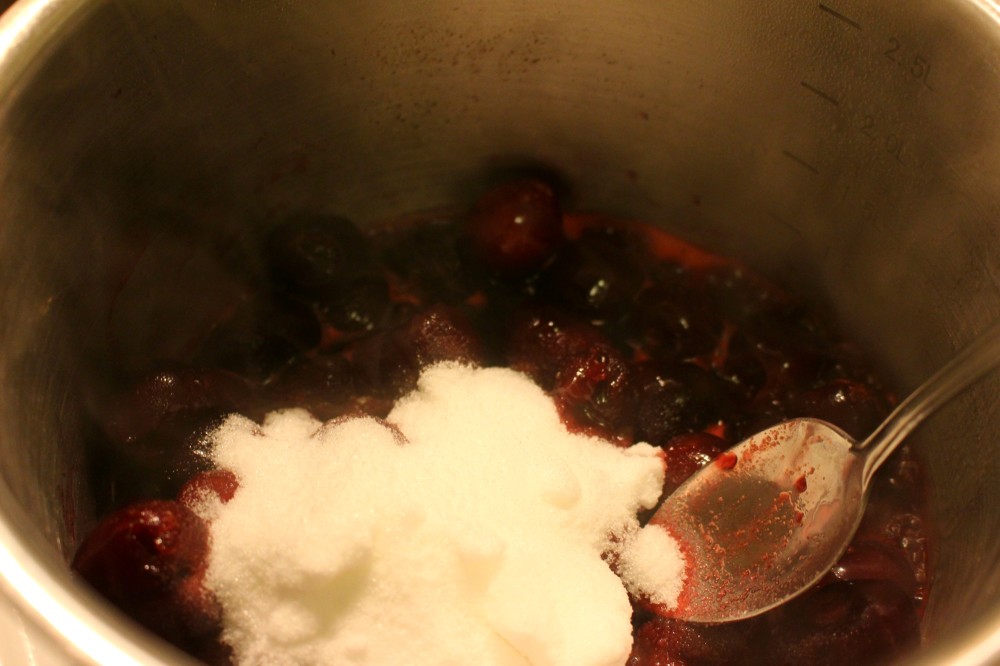 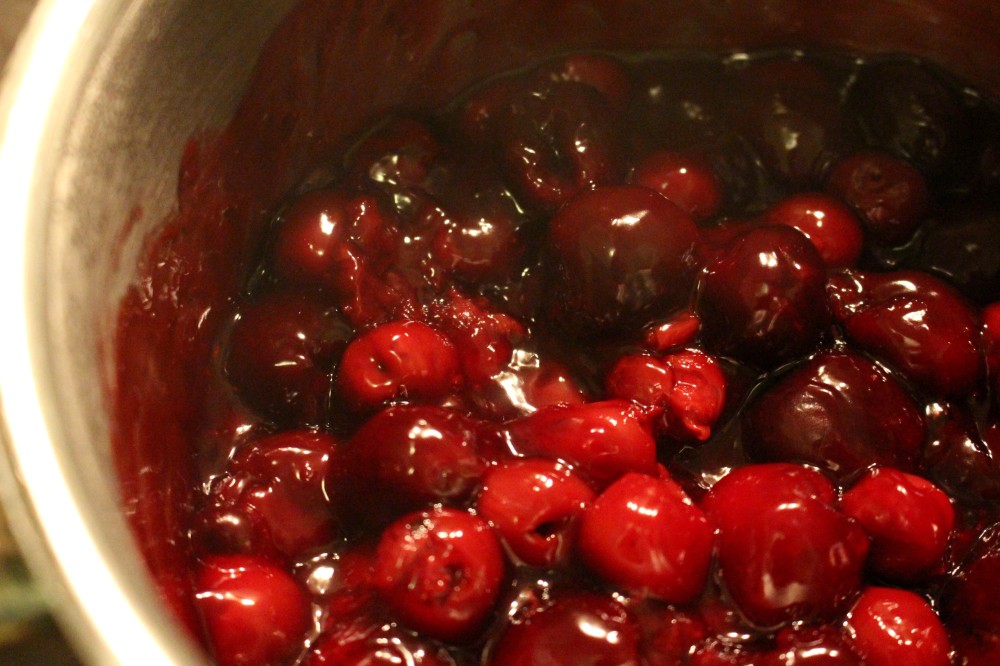 Roll out the larger portion of pastry and use to line a greased 24cm pie dish, leaving about 2cm overhanging. Chill for 20 minutes.

Preheat the oven to 200 degrees Celcius.

Fill the pie base with the cherry filling. Roll out the remaining pastry and use a sharp knife to cut into thick 1.5-2cm strips. Arrange the strips over the pie in a lattice pattern and bring up the overhanging pastry, trimming and crimping the edges with a fork. Use any offcuts from the pastry to cut out decorations using small pastry cutters, or a small sharp knife. These can be brushed with cold water and pressed over the lattice strips in a decorative pattern. Brush the pie with the egg wash and sprinkle with the demerara sugar. 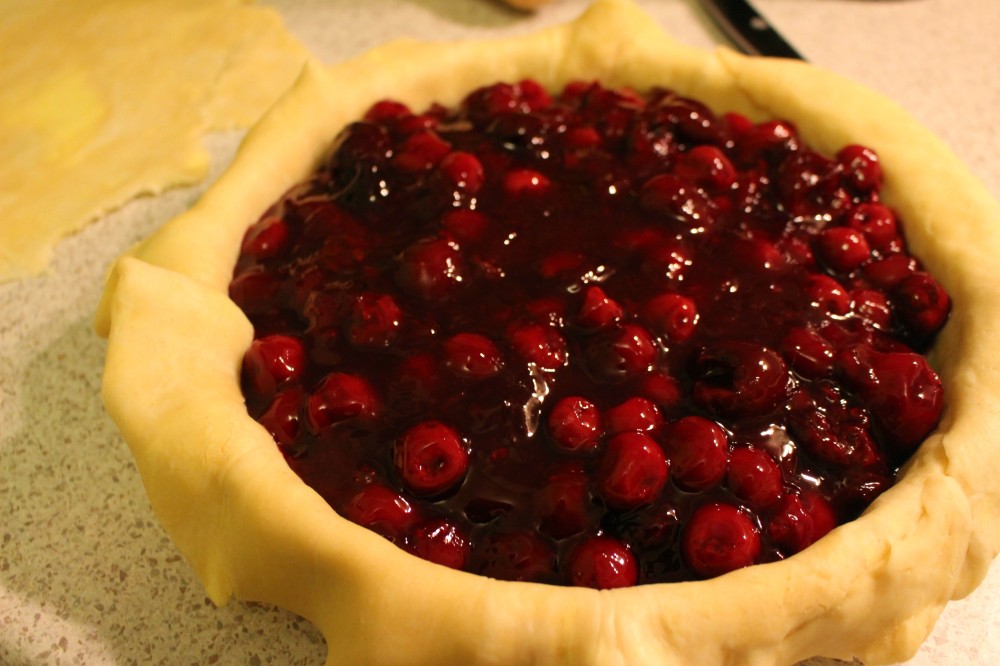 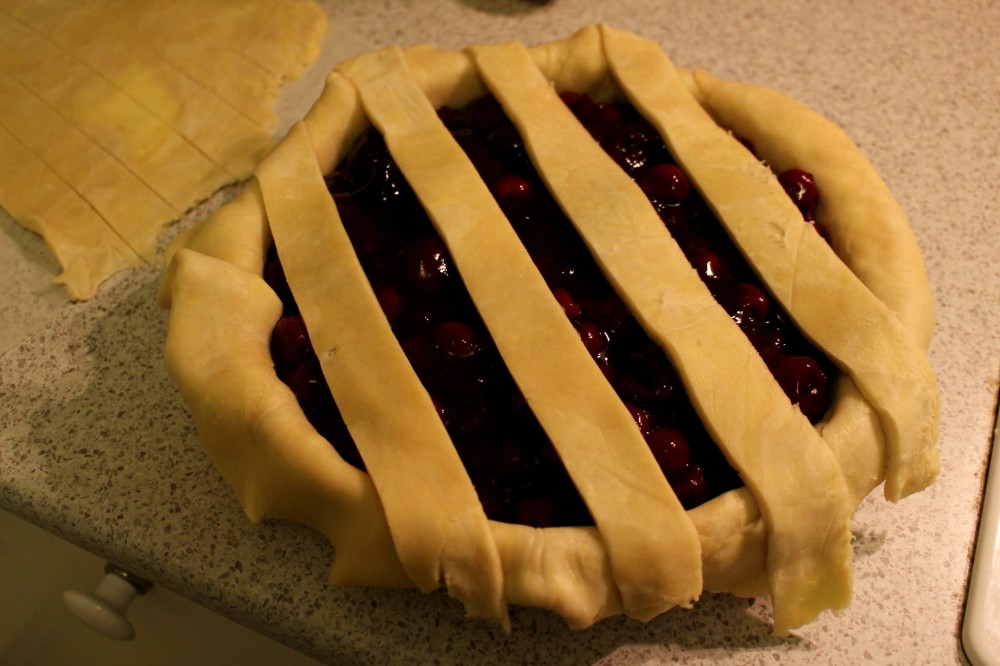 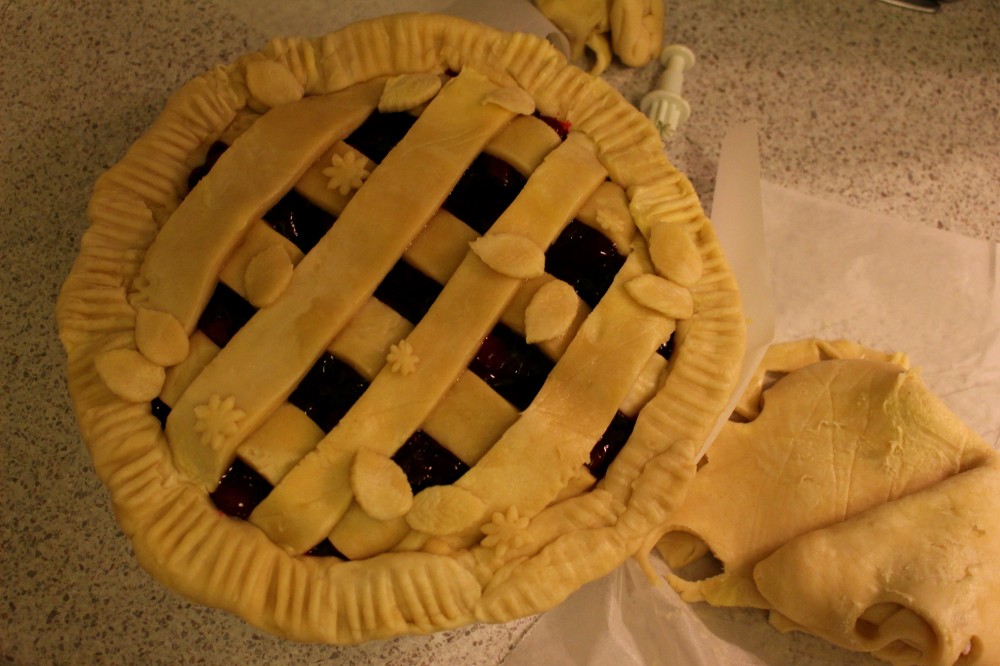 Bake the pie for 15 minutes. Then reduce the heat to 170 degrees Celcius and cook for a further 25-30 minutes until golden. 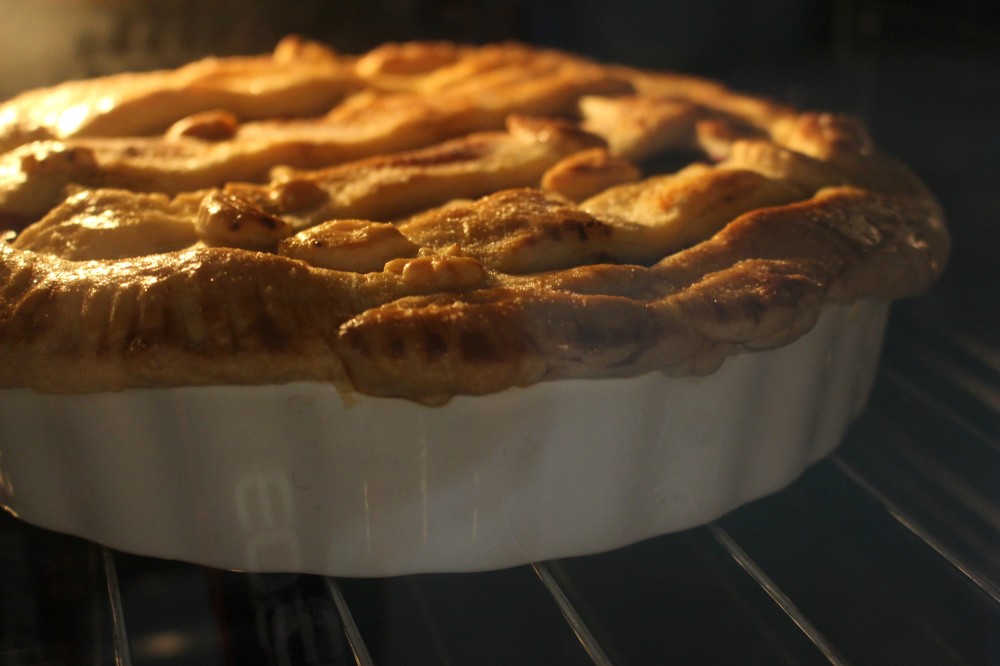 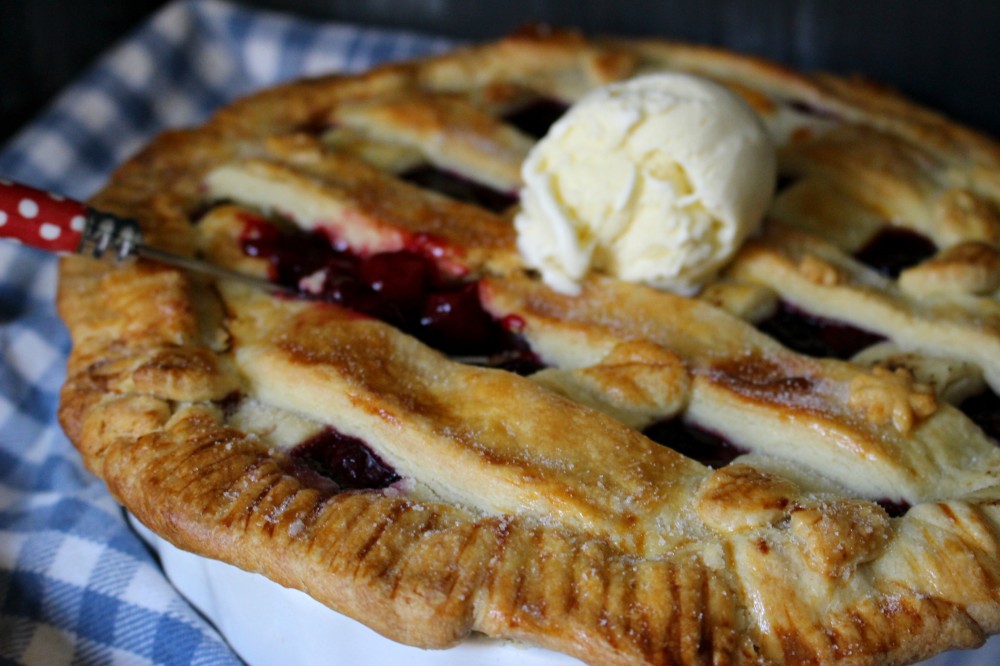