I don’t know if this is the case for anyone else, but I think it’s alarming how quickly romantic nights out become a thing of the past when you move in and settle down with your significant other. If you both have 9-5 jobs, you develop a routine incredibly quickly: the morning ritual of getting ready, churning through the workday, visiting the gym, then heading home for dinner and a bit of television (the current addictions are Iron Fist and RuPaul’s Drag Race) before bathing and sleeping. Wake up the next day, rinse and repeat. Weekends become the time to catch up on groceries and chores, squeeze in more workouts, meal prep for the upcoming week.

As non-spontaneous as scheduling “date night” may seem, it really does need to be a thing. An evening where you can enjoy some entertainment, food and or drink with your significant other and forget about that huge pile of washed and dried laundry on the sofa waiting for you to fold up, or worry about what you are going to prepare for work lunches tomorrow.

Prior to heading off to Hong Kong, Night Owl and I were hitting our low point – that point where you know it’s time for a proper holiday. I had been having a stressful couple of weeks as I was worrying about how I was going to come out to my parents (which I will tell the story about next week), and Night Owl suggested that we have a date night where we go out somewhere nice for dinner. I said I loved the idea and asked where, and she responded that she hadn’t thought that far yet; she’s obviously not the foodie in this relationship! 😉 After not too much thought I suggested that we visit Bishop Sessa in Crown Street, Surry Hills. They offer a “Menu 55” which is available all day Tuesdays and Wednesdays and lunchtime on Saturdays, where you can choose an entree, main and dessert from the regular menu for just $55 per person.

Bishop Sessa Bistro and Wine Bar is headed by Melbourne nose-to-tail chef Paul Cooper (Pied à Terre (London) The Botanical, The Provincial Hotel, O’Connells Hotel), and Erez Gordon (Jacques Reymond Restaurant, The Botanical, Mezzo (London)). The restaurant has a casual approach to modern European dining, and prides itself on focusing on local, sustainable produce and nose-to-tail cooking (using the whole animal) wherever possible. Everything served at Bishop Sessa is made on the premises.

I had made our booking well in advance, opting for a later booking of 8.00pm so that we could enjoy a drink beforehand. Upon arrival at Bishop Sessa and being seated, we were brought amuse bouches and warm bread with butter. The seaweed crisp with wasabi cream was particularly delicious. 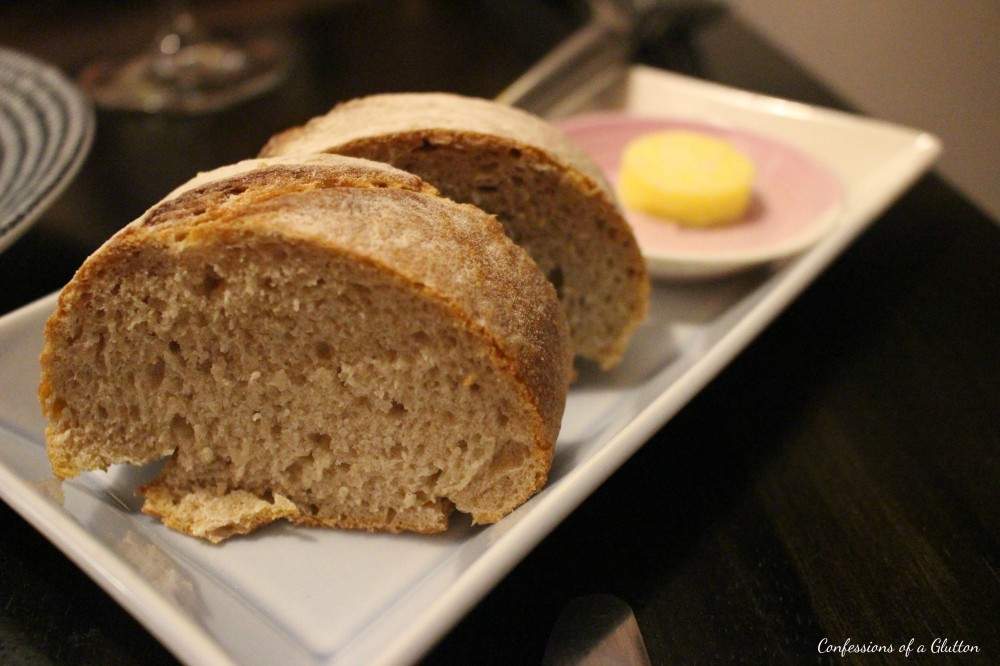 For wine, we were looking for something that would go with our selected mains. Night Owl chose the Castillo Rodafuerte Tempranillo 2015 La Roda 12, while I went for a glass of the Beaune Pinot Noir 2014 Burgundy 18. Both are steady reds that are not too sweet, the Tempranillo with a scant more tannins than the Pinot. There are over 30 wines served by the glass and almost 200 through the whole drinks menu – it was a dizzying list and it’s easy to see how their wine list was awarded 2 Goblets in the 2016 Gourmet Traveller Wine List Awards.

For our starters, we selected the Sesame-seared Yellowfin Tuna ($20) with peach dressing, pickled cucumber, and calamari cracker. The tuna was deliciously fresh. and its meatiness was mellowed out with the sweetness of the peach dressing and tang of the pickled cucumber. We were very impressed with the presentation of the black bubbled calamari cracker, and the addition of fish roe made for nice pops of umami flavour.

Our second entree was the Berkshire Pork Belly poached in Whey ($20) with apple, radish, kale, and pork broth. As soon as I speared the pork with my fork and it gave way like a hot knife through butter, I knew we were onto something good. The pork was melt-in-the-mouth perfection and a crunch of the scratchings was exactly what you needed to complete each bite. The kale was lightly cooked – a gentle accompaniment to the strong flavours.

The entrees were so generously sized that we noted that we were starting to feel alarmingly full already. Too late for that – here came the mains!

Night Owl loves duck, and selected the Coal-grilled Burrawong Gaian Pekin Duck Breast ($37) with dehydrated grapes, pumpkin and coffee puree, with hay-braised carrots. The duck breast was lean yet tender, still deliciously pink. The carrots were sweet and the purees smooth – it was a perfect winter dish, as was my lamb.

I had selected the Roasted Cowra Lamb ($36), with merguez style sausage, pomme puree, beetroot, plums and wattleseed. A merguez is a red, spicy sausage with origins from North Africa, but it  is also popular in the Middle East and Europe. It’s heavily spiced with cumin and usually chilli or harissa, as well as other spices such as sumac, fennel and garlic. The merguez-sausage in this dish (the large, cylindrical pieces) were wonderfully soft and flavoursome. It may have almost overwhelmed the lamb in the dish, but the lamb itself was lean and tender – so it wasn’t lost entirely. A little beetroot sweetened the dish and lifted it up from the heavily spiced sausage, while Night Owl eagerly scraped up the pomme puree – potatoes are her weakness, after all.

We take a much-needed breather before dessert arrives, and are presented with two small treats – a housemade cinnamon biscuit with beetroot rhubarb jam and burnt meringue. It’s tarty, buttery, crumbly, and sweet all at once; I’m delighted by the simultaneously earthy, sweet and sour characteristics of the pink jam underneath its little scorched hat. We enjoy it with our amaro, a Montenegro each with a wedge of orange.

I originally had my eye on the Milk Chocolate Tart as it was on the degustation menu, and if you ever want to know what the chef’s specialties are, I always refer to the dishes listed in both the a la carte and the degustation menu. But it was the Black Sesame Parfait ($15) with mango jelly and smoked chocolate cake ice cream that I ultimately went with. The ice cream had called to me, and its intense aroma combination was like cigars and bitter cacao – punchy and bordering on savoury, The parfait was smooth and nutty , and the jelly helped to add some much needed sweet balance to the dish.

Night Owl had ordered the Apple Terrine ($15) with walnut, coffee mousse, and apple cider ice cream. It reminded me of  the one attempt I ever made at making a crepe-cake, and gave up after 15 or so crepes (never again)! The terrine was beautifully soft and paired well with the hit of earthy coffee and walnuts, while the cider ice cream served as the refresher element to the plate. That reminds me that my parents recently gave me a bag of apples freshly picked from their recent visit to Bilpin – I’ll have to brainstorm some recipes soon.

We were one of the last tables to leave around closing time, as we were struggling to get up with how full we were! It was an incredible dinner and I have not seen that simple, elegant approach to food in a very long time; particularly not in the city area. Food should be generously plated, pleasing to all of the five senses, and should not be a complex science to make.

For anyone who is interested, Bishop Sessa also run pork and truffle dinners during the year and I’ve heard they sell out quickly! Keep an eye on their website for details 🙂