I can’t believe its been a month since my last post! Moving last month certainly took a toll on my energy and creativity levels – not to mention my wallet. Prior to starting the nightmare task of packing, my brother-in-law – also a fellow culinary enthusiast – hazarded a guess that I would have more to pack in the kitchen than in my bedroom (sadly enough) and suggested that I pack up the kitchen the week prior to the big moving day. It took me about two days to clear the kitchen into neat cardboard boxes, and even after moving day it took me a couple of days to set up the new kitchen in the most ergonomic way and adjust to the new electric cook-top and oven. Discovering that the thermostat in the oven is broken was one of the first problems we encountered (it’s about fifty degrees hotter inside than what the dial reads), and then my internet provider has taken over three weeks (and counting) to re-locate my service which is the reason why I have neglected my blog for so long. Annoyingly enough you waive your rights to compensation for any delays when you ask them to commence the relocation process; if you disagree they simply don’t reconnect you! I spent about every evening last week on the phone to their call centre attempting to configure the modem while losing my breath arguing; and I finally got told that I will be comped from the date my service was supposed to be active from (last Monday the 1st August) and a technician is booked to swing by today. And of course the technician will be by sometime between 8am and 6pm….

Rant over. During the first week of settling in I was delighted to receive an invitation to try the new French-themed High Tea menu at Vaucluse House Tea Rooms with a friend. Deciding that the missus (Night Owl) and I needed a break from figuring out how the electric cooktop worked, I accepted and it was a sunny Sunday that we drove over the Bridge and into the windy roads of the luxury side of the Eastern Suburbs.

The turn off into the grounds of Vaucluse House reminds me of an estate tucked away in the Blue Mountains, or somewhere out of a fairy tale storybook.

Vaucluse House Tearooms is located in a heritage-listed building, with offerings of breakfast, lunch, high tea, and as a venue available for private events and wedding receptions. On weekdays the high tea is available Wednesday to Friday from 10am to 3.30pm, while on weekends there are three seatings: 9.30am to 11.30am, 12pm to 2pm, and 2.30pm  to 4pm. It’s priced at $55 per person but you can get the “French upgrade” (which of course involves some lovely French champagne) for an additional $15. The interior is deliciously cosy and quaint, with its cottage-style charm emphasised by the bundles of jonquils and lavender on sale in the small gift shop near the front reception. The atmosphere is surprisingly laid-back; I’ve only previously attended high teas where it was almost a requirement to be dolled up while the waitstaff hovered in stiffly-starched uniforms and the silverware was all relentlessly polished. While I’ve previously felt like I would be scolded for incorrect high tea etiquette at other establishments, the feeling here was that no one would care less if you used the same knife to cut your scones then dipped it into the jam and the cream!

As soon as we are comfortably seated we are handed two glasses of NV Moet & Chandon Brut Imperial, and we toast to the end of our hectic moving week and in anticipation of the fabulous high tea to come.

The tier arrives and we let out a combined “ahhhhh” sigh of admiration – as should happen when something of such beauty emerges! It’s the perfect combination of rustic charm and gourmet – some old-fashioned treats like ginger cake and the classic scones, combined with new world twists like the savoury salmon and herbed cream cheese cornet with Keta caviar. 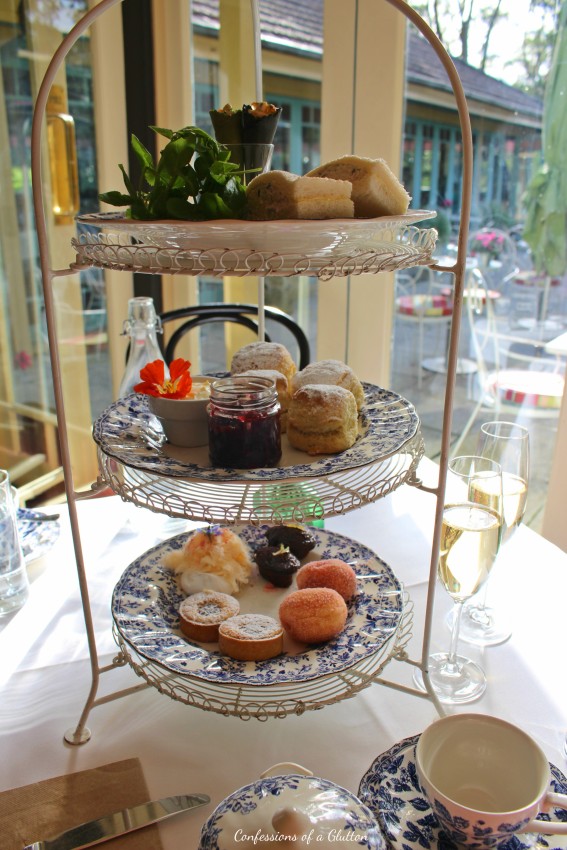 So to take you through it: The top tier held the savouries: a Poached Chicken and Walnut Harry’s Bar Sandwich, Pumpkin and Spinach Tart with Smoked Creme Fraiche, Salmon and Herbed Cream Cheese Cornet with Keta Caviar, and a Housemade Mini Lamb Sausage Roll. 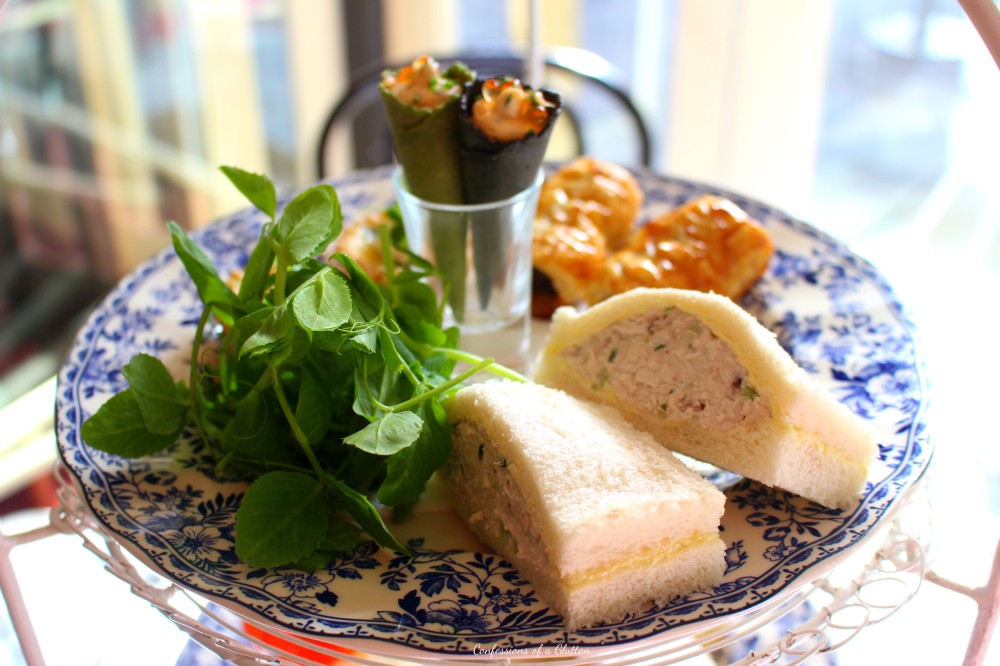 The chicken sandwiches were beautifully soft and nicely seasoned, the pastry on the tarts and sausage rolls divine, and the cornet was a wonderful new-world addition to the classic high tea. The subtle smoked flavour from the creme fraiche lingered on your palate once you were done.

Next – onto the scones! These were Buttermilk Scones with Clotted Cream and Rosella & Berry Preserve. 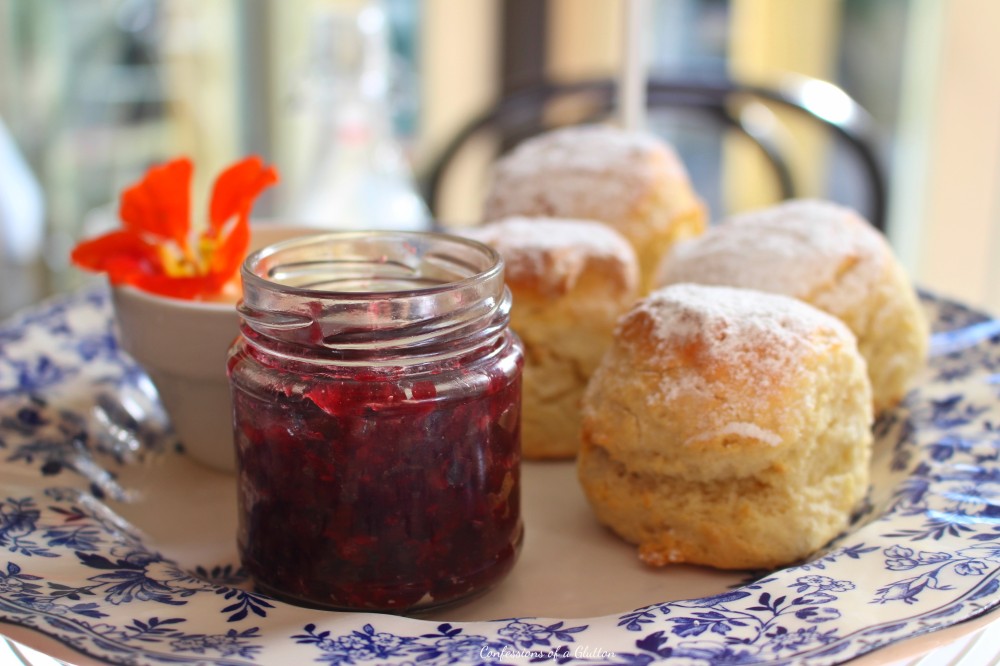 They were still warm when I tore them open; slightly crusty on the outside and pillowy soft on the inside. You will be surprised as to how many poorly-made scones I’ve tasted at high teas in my lifetime – from too-dry to too-doughy, to not enough crustiness on the outside, to being served stone-cold. These were utter perfection and barely needed that slather of cream and preserve (but of course, you don’t even think about going without!). The Rosella & Berry Preserve was chunky and substantial – not a watery jam held together by jelly but more of a sweet fruit puree.

At this point I had my tea – I went with the Earl Grey. There isn’t a huge selection of teas on the menu, but it has the classics and tea is unlimited so that’s a very big bonus.

But back to the sweets! I immediately reached for the Elderflower Cheesecake-filled Doughnut and as soon as I bit into it, rolled my eyes heaven-wards. I had strawberry sugar all over my lips but could not care less with the incredible combination of flavours and textures going on. Soft, pillowy doughnut piped with a smooth cream cheese mixture, lightly perfumed with elderflower. I was very sad when I finished the doughnut! But the quality of the pastry on the bakewell tarts and the subtle earthy spiciness of the ginger cake did not disappoint, and I was charmed by the heady fragrance of the rosewater meringue. It was Night Owl’s first experience with Persian Fairy Floss and she was very entertained by its unique texture.

I can guarantee that you will be needing a walk after the substantial high tea, so after we were farewelled by the staff we took a turn around the gardens. I’m very pleased to say that this was one of the best high teas I’ve ever had in Sydney and I would not hesitate to come by again – hopefully soon! 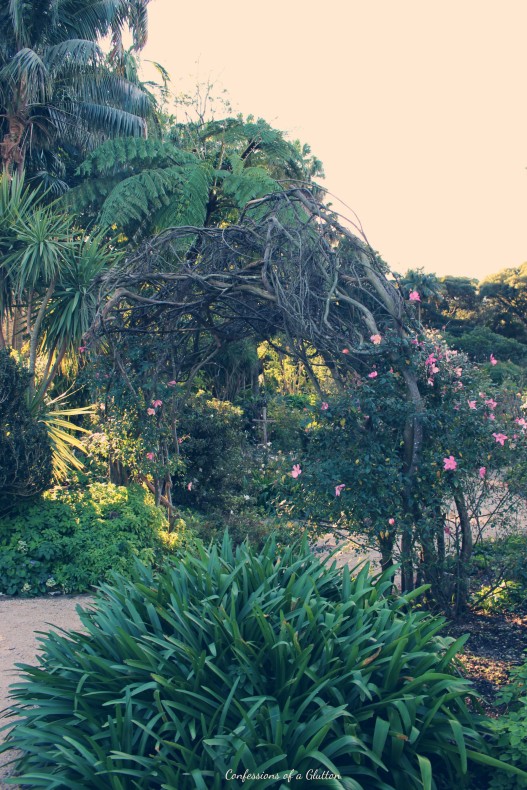