Back in late high school, to prepare us for the “workforce”, the careers advisers at my school put out a program that each Year 10 student was to do one week of work experience and one week of volunteering late in the year. For my work experience component I was sent off to the room service kitchens of a notable Sydney hotel where I wanted to get out from Day 1 – the amount of noise, swearing, and the dreary huge amount of food prep to be done each day was endless! From that experience though, I took away techniques like how to peel a prawn (after peeling about a bathtub’s-worth of them) and how to make pesto (without a recipe, and it was my first time, and then it was terrifyingly tasted by the head chef).

For my second week of volunteering I was allocated to a retirement village the week prior to Christmas, and it was there that I met some of the loveliest souls I’ve ever encountered. The hardworking staff who ran the village had myself and another student decorating the halls and function rooms with swathes of tinsel and making endless paper chains, but the real treat they had organised mid-week was for a number of the residents to go down to a Lebanese community centre where the local families there had prepared a Christmas feast as well as an afternoon of dancing and entertainment. It was there that I had my first taste of some authentic Lebanese cuisine – and my first taste of baklava, oh my Lord. I loved the heady, aromatic combination of garlic and spices, and I was so busy trying everything that I luckily managed to get out of the belly dancing activities 😉

It’s probably of no surprise then, that I’m in love with Lebanese-style charcoal chicken, served with warm pita bread, pickles and a deep dish of that beautiful garlic sauce – so creamy and fragrant but probably not ideal if you’re planning to kiss anyone afterwards 😛 I’ve been usually relying on friends travelling out west-ways to help me top-up my supply of garlic sauce, but when I walked into Manoosh on Enmore Road last Sunday and saw the boxes of garlic sauce stocked high in the fridge, I knew I had found a new local supplier!

Manoosh is apparently a bit of an inner west institution. When Night Owl told friends that she would be moving to Enmore, there were replies of “oh, you’re so lucky – you’ll be right near Manoosh!” Other than the odd night’s chicken wrap and a takeaway pizza on an inebriated occasion, Night Owl hadn’t had much of an opportunity to sample its specialties and so was more than happy to accompany me when I got my invitation.

Arriving on a Sunday close to 2pm, there were a few tables of people enjoying lunch in the semi-alfresco seating. It was quiet enough that I could have a chat with Charlie, the owner, who has recently expanded over to Marrickville with another shop, allowing the delivery radius of their bike fleet to spread out further along the inner west. He mentioned briefly a possible plan to open another shop over in the Eastern Suburbs, but said that he would see first how the Marrickville shop does. He invited us to take a seat, and that he would bring out a few dishes that he thought were Manoosh’s specialties.

We start off with the Haloumi Pie ($7): melted haloumi in a semi circle pie coated with sesame seeds. Check out that stretch! 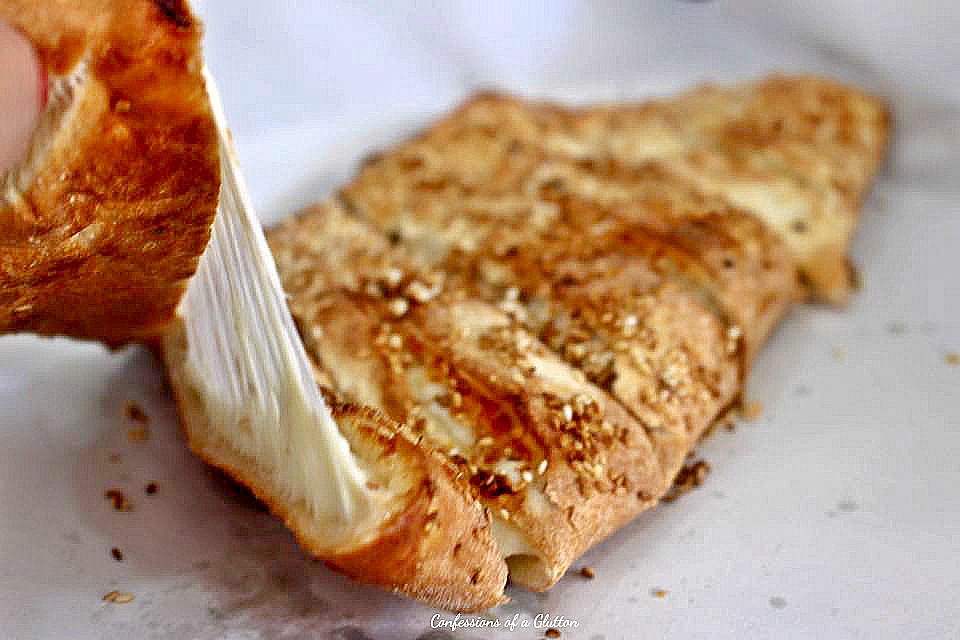 The crust on the pie is crisp and other than the natural creamy flavour of the haloumi and the nuttiness of the sesame seeds, it’s quite light in flavour. The haloumi is stretchy and reminds me more of a mozzarella rather than the haloumi I’ve always had, which always squeaks. Charlie tells me that the haloumi I’m used to is Greek haloumi which is in square blocks, while Lebanese haloumi is actually pulled, stretched and woven into bundles which are then bottled in oil – you can find it at Arabic grocery stores.

He brings over the Chilli Tongue ($16) which comes from the traditional-style pizza menu, which is topped with cheese, extra pepperoni, mushroom, fresh tomato, Jalapenos and chilli flakes on a tomato base – one of their most popular pizzas. The heat from the chilli and Jalapenos isn’t overwhelmingly fiery, but it’s a slow-burning heat that creeps up on you! I’m most impressed by the base – the pizza, being cooked on a bubbled tray means the base has been raised off the tray and it’s beautifully crisp and crunchy.

Charlie brings us two wraps, the first being the Chicken Wrap ($8) which is their most popular (and which Night Owl has had many times). The wrap is a rolled up combination of chicken breast, lettuce, tomato, pickles and onion topped with their famous garlic sauce. It was a nicely fresh and crunchy combination of flavours and textures.

If I had to go for a wrap though, I would go with our second one – the Lebanese-style Zaatar with Labne ($6.50): zaatar wrapped up with fresh labne (yoghurt), olives, onion, tomato and mint leaves.

The heady combination of zaatar spices, along with the savoury, near-citric tang of the labne and the earthy saltiness of the olive tapenade was wonderfully brought together by the fresh hit of the mint leaves. It was all encased by the warm and fluffy housemade dough wrap – very satisfying.They also have other zaatar wraps with haloumi, ricotta, vegies and Beirut-style.

We think that’s it, but then Charlie comes back around with this:

The Meat Pizza (Lahembajin) ($6.50) was unlike anything I’ve ever seen before. A simple Lebanese pizza base topped with lean minced lamb, minced tomatoes and onions, mixed with seven different spices and served with a wedge of lemon. My first bite has my eyebrows reaching for my hairline – it’s unlike anything I’ve ever tasted. The texture of the topping is incredibly fine, and incredibly aromatic, with sweeter spices of cinnamon and nutmeg coming through – not flavours I would have been expecting with a savoury pizza. A squeeze of lemon juice adds another dimension and lifts the earthiness of the lamb mince.

Manoosh is generous with their toppings and make superb bases on their pizzas, but I’m of the opinion that what makes them different from any other place is the amazing variety of traditional Lebanese options – I would definitely return for that meat pizza, any of the zaatar wraps, and a big takeaway tub of that garlic sauce.