My friend M has a funny way of showing her affections. A prime example is over a year ago, when we had the time to meet up every couple of weeks or so to explore what Sydney had to offer. This mostly involved jumping around the inner western suburbs – an area which I was pretty unfamiliar with back then, but as she lived in the midst of it all she wanted to show me where she found the tastiest snacks, the trendiest cafes, the best food wholesalers. In return, I plied her with large amounts of baked goods every time I saw her, and this occasion was no exception. We were going around Marrickville’s Addison Road markets, and we split briefly so I could check out some potted herbs. When we met up, she had a large bouquet of lilies in her hand which she promptly thrust at me with no explanation whatsoever. Bewildered, I asked if she wanted me to hold them for her – she said no. I asked if she was buying them for her partner – she repeated, no – they were for me. I said I couldn’t take them but she insisted and we went back and forth for a minute or two before I finally confessed that lilies trigger off my hay fever. I felt terribly guilty at the aghast look that came across her face after I said that!

A similar incident happened a couple of weeks ago, where I was over at Night Owl’s place in Marrickville as her housemates were hosting an Australia Day barbeque. We had invited M, and mid-conversation she pulls out her phone, indicating she had sent me a message. I check my phone, to see a pending restaurant reservation for four.

“Make sure you’re free that night” she said shortly, before changing the topic.

And so Night Owl and I found ourselves in a double-date situation with M and her latest squeeze. I was overwhelmed by how generous she was – she had booked us in for a Lime & Tonic Sydney deal at the hatted Saké Double Bay.

I was also very curious as to what it would be like. I had been tossing up between Saké in The Rocks and the Double Bay establishment for Night Owl’s birthday late last year – Double Bay is hatted while The Rocks was not, the menus varied slightly, but The Rocks was easier to get to and from? Ultimately I went with The Rocks and we had a lovely night; but I was interested to see how the Double Bay branch would compare.

Saké Double Bay is located an eight minute or so drive from the centre of the Sydney CBD, and is nestled in right beside the infamous luxe Intercontinental Double Bay. It’s a much smaller restaurant than its Rocks counterpart, with about a quarter of the number of seats – if not less. It still has the classic Saké modern Japanese interiors of smooth, darkly polished wood, seating at the sushi bar, and young, trendy waitstaff who shout out the cheery “irrashaimase” as you enter, but I miss the big drums of sake, the traditional sunken tables, the soaring high roof beams. The entrance of the restaurant is via the small arcade entrance next to the Intercontinental, which houses a few luxury boutique stores; you seem to lose a bit of the sense of “exclusiveness”, in comparison to its mysteriously-lit Rocks restaurant.

But the benefit of the restaurant being a smaller size and lacking the wooden floor and high ceiling? Minimal noise echoing, which made for a much more serene dining experience rather than having the constant chatter in the background washing over you.

We were seated at the communal table but given a seat on either side of our party of four for space as it was a quiet Sunday evening. We were each given a menu for the $69 Lime and Tonic seven-course dinner experience. 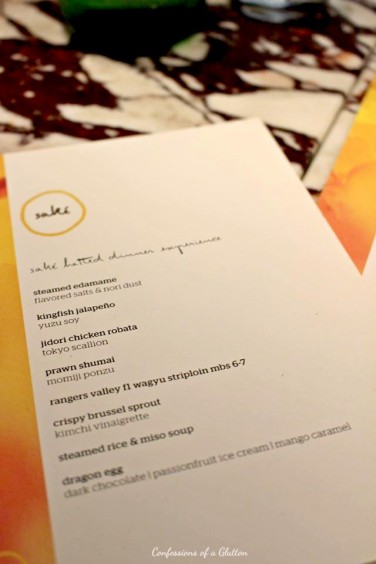 There’s a glass of Prosecco on arrival included in the experience, but Night Owl and I are in the mood for something with a bit more punch and so peruse the cocktail list. I choose the Ninjaroni, part of the seasonal cocktail list, while Night Owl selects the Mr Brightside from the signature cocktails. 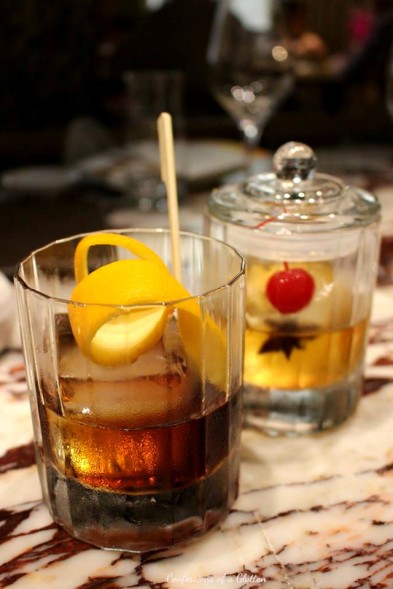 My Ninjaroni ($20 – front) is a Japanese-take on the classic Negroni, with Suntory Kakubin Classic whiskey, Averna and Cointreau. It’s quite sweet but also smooth, a lovely drink to sip on. Night Owl was pleased with her Mr Brightside ($22 – back) with Nikka from the Barrel and Ardberg 10yr old Islay whisky stirred with Disaronno Amaretto, served smoky. With it being “served smoky”, it had an accompanying glass lid to trap the smoke inside, and with the already intense flavour of the Ardberg it gave the drink a near-savoury quality.

In true Japanese fashion, the meal starts off with Steamed Edamame – served with flavoured salts and nori dust.

We quickly move onto one of Saké’s signature dishes, the Kingfish Jalapeño: 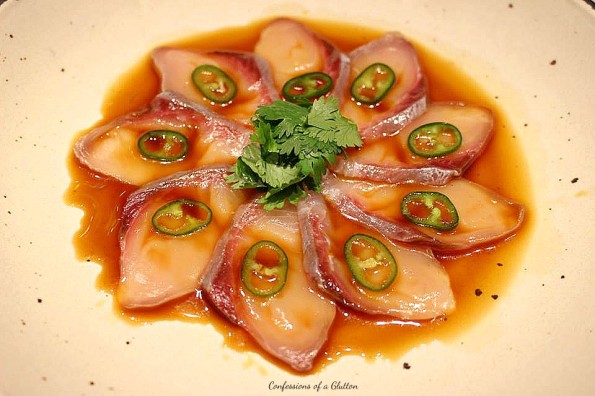 It was presented as beautifully as it was at its Rocks counterpart. I did note however, that this restaurant left the kingfish skin on – not something the other restaurant did. I felt that it resulted in a rather disappointing “fishier” aroma which even the yuzu soy and jalapeño could not mask.

The Jidori Chicken Robata with Tokyo scallions is next, or yakitori. “Robata” means anything slow-grilled over charcoal, while “yaki” (roasted) “tori” (bird) refers specifically to chicken. We each demolished our skewer of juicy, flavoursome chicken thigh very quickly.

We are then presented with a wafting steamer of Prawn Shumai served with a momiji ponzu.

Each one had a melt-in-the-mouth quality, with the prawns whizzed to a very fine mousse and steamed gently. The ponzu dipping sauce added a beautifully uplifting citrus aroma.

The main course of our seven-course dinner then arrived: the Rangers Valley F1 Wagyu Striploin with a marble score of 6-7. It arrived cooked medium-rare, and came on a wire rack balanced over a small charcoal burner to either keep the steak warm or for you to continue cooking the slices over it – depending on how you liked it. The steak was buttery and tender – perfect on its own or with the accompanying steamed rice and miso soup. We enjoyed it with some vegetables – Crispy Brussel Sprout with a kimchi vinaigrette. For one of our party, it was his first taste of brussel sprouts and he was surprised he liked it! We all declared that it was our favourite way of eating brussels. With its beautifully charred flavour, the spice of kimchi and the zing from a squeeze of lime over the top, it’s the most delicious side you can imagine.

Our savouries over, our plates are cleared and the waitstaff come over with our long-awaited dessert: the Dragon Egg. Dark chocolate, passionfruit ice cream, mango caramel on the inside. The dark chocolate egg is dusted with gold, and when served the waitstaff proceed to pour liquid nitrogen over the top of it to “set” it – although I’m not entirely sure what it was setting as it looked pretty solid when it arrived! Maybe it’s just for theatrics – because it did look amazing!

Tap the top of the egg with the back of a spoon a couple of times and the egg splits open ever-so-neatly like a flower, revealing the mango caramel inside.

While the restaurant stated they needed the table back two hours from our booking time, it was past 10.00pm and we were still lazily eating away at our dessert. The restaurant was near-empty by this stage though, so they didn’t seem to mind. It was definitely a lot more casual than The Rocks, where we were shooed out at 8.00pm on the dot (with a 6.00pm booking) and no mention of a two-hour table turnaround had been made when I ordered the booking.

Overall, it’s a little hard to say how Double Bay won its hat over its Rocks counterpart, but then as I didn’t have the exact same menu items as I did a few months ago, it makes the comparison difficult. The Rocks does the classic kingfish jalapeño better and have a killer green tea Kit Kat dessert, however Double Bay’s steak, brussel sprouts and that dragon egg are all elements that make it shine.

It’s a hard call! Maybe I will have to go back another time to make up my mind 😉 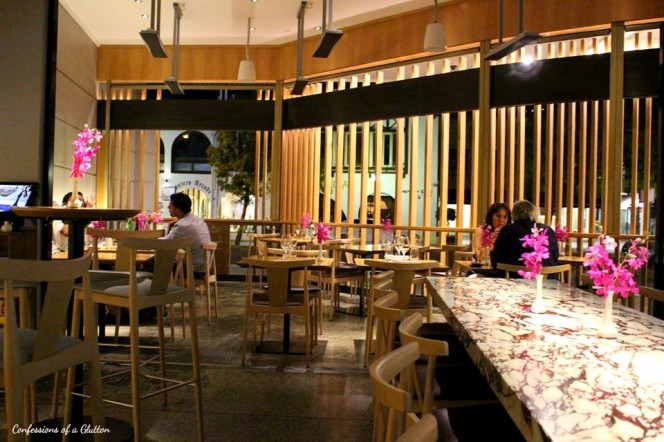