I’ve noticed that I’ve been attending more South American restaurants as of late, and it’s not something I’m going to be complaining about anytime soon. It’s over the last year or so I’ve learned that South American food isn’t limited to beans, tortillas and queso. While I’m not opposed to a food court burrito bowl now and again, I’ve come to learn that Latin flavours can mean much fresher, honest flavours which do not always necessarily include potent amounts of heat.

I had received an invitation to check out a new South American restaurant on the Neutral Bay strip: La Puerta. Only a few months old, La Puerta is tucked away slightly off the bustle of Military Road, meaning it’s quite quiet even on the small outdoor seating area. It’s roomy inside with its high ceilings and simple furnishings, but there’s an intimate feel created by the low-hanging red-hued lighting, earthy-toned walls, and the small number of tables.

The restaurant is owned by chef Oscar Espinosa, who was trained under the best chef in Bogota, his hometown in Columbia and was previously head chef at Mexicano. His inspiration to open La Puerta stemmed from his experience in many kitchens throughout South America and wanting to bring those flavours to the Sydney food scene. His charming wife – Catherin Rodriguez – runs the front of house.

The bar stocks a variety of drinks including good few South American beers. While I was tempted by them, I was here to review the food menu and didn’t want to fill up too quickly – I’ll save it for another time! The cocktail list piqued my interest, featuring classic drinks with a twist. I decided to try a Yerba Mate Pisco Sour ($18), while my always-present-date Night Owl decided to daringly try the Tequila Negroni ($16).

It’s a little unconventional for a sour or a negroni to come served in a martini glass, let alone for a negroni to arrive with a salt rim, but this was the restaurant’s own twist on the classics so let’s see how they go. Mine was a classic sour – foamy and refreshingly zesty. Night Owl had mixed feelings about her negroni – a combination of tequila, sweet vermouth and Campari. The lime salt rim indicates that you should drink it from the rim, but we found it tasted much better without the salt rim and sipped from the straw. As a bartender, of course she had to put her two cents in, and said she would have added an orange zest into the drink to further bring out the aroma of the tequila.

For the food, Catherin said they could either have the kitchen bring out a selection of food or we could order as we liked from the menu. Having perused the menu online the day before, there were key dishes that I wanted to try. You know it’s going to be a good experience when you ask what they think their signature dishes are, and the answer is: “everything!”

We start the meal with classic Platanitos ($9.00): avocado dip with plantain chips – because you can’t start a South American meal without them. So much better than corn chips and guacamole, hands down. 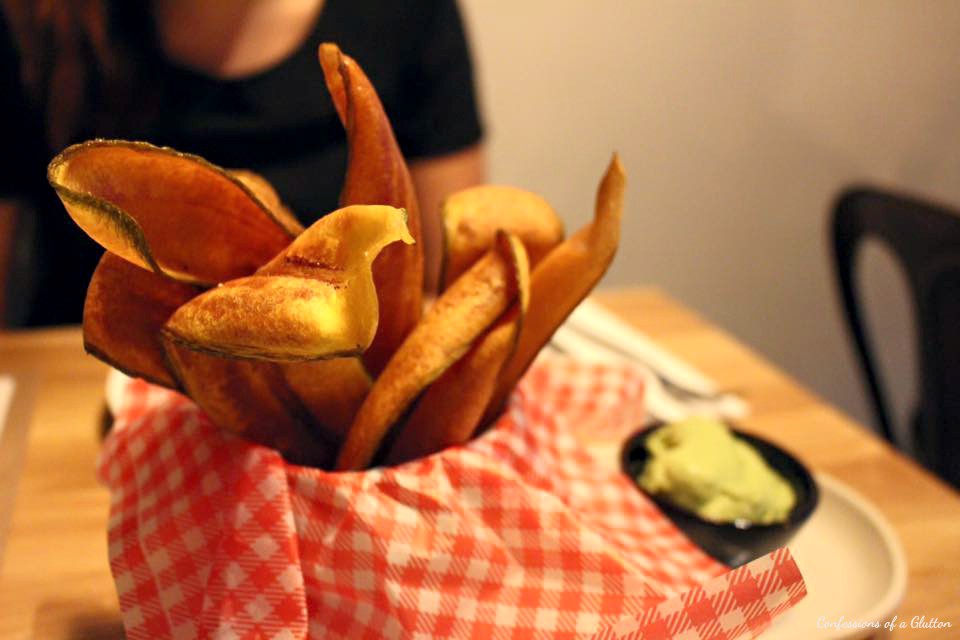 These were – as Night Owl put it – the best plantain chips she’s ever had, and for someone who’s half Peruvian that’s a big call! Talking to Oscar, they cut the plantains themselves in the kitchen. These were amazingly thin, fried and curling at the ends, with a satisfying, moreish crunch. The texture of the avocado dip tasted like it had been blended as opposed to being mixed by hand. While I do enjoy the chunkier hand-pounded guacamole, this blended dip was so deliciously smooth and silky.

I can never go past the ceviche – I love tasting and seeing the different interpretations of it at each South American restaurant; the different types of fish, garnishes, the textures. The Wild Ceviche ($25) here is a king fish Peruvian-styled ceviche with “leche de tigre”, or “tiger’s milk”, being a Peruvian term for the citrus-based marinade that cures the seafood. It’s a combination of fish juice, lime juice, sliced onions, chillies, salt and pepper. It’s also believed to be a hangover cure and an aphrodisiac…just FYI 😉

La Puerta’s version comes served with fried squashed plantains. Balancing the ceviche mixture on the plantain and biting down provided a wonderful contrast of flavours and textures with the crisp plantain against the soft, citrus-infused seafood. There was a fair bit of red onion in the topping, but you can easily avoid it or else have your date eat it too and then you won’t have any problems!

We felt like something green so ordered a Tropical Salad ($14): a leafy and crunchy salad with a sweet touch of charred pineapple, green mango, roasted coconut flesh and pecan nuts finished with a pomme granite dressing. 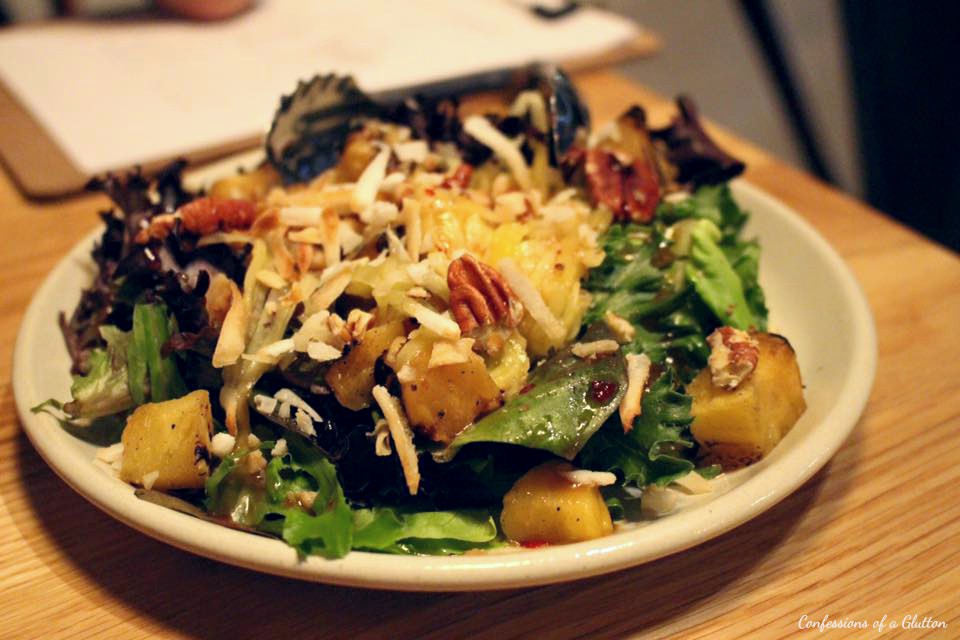 There’s so much fruit that you almost feel like you’re eating a fruit salad if it were not for the crunch of the salad leaves. It was a lovely dish and not something I’ve seen nor heard of before.

To finish off our main meal, we tried the Chicharron ($24): crispy pork belly with red and green puré topped with chorizo crumbs. The dish normally comes with four slices of pork belly, but the kitchen – noting our slowing appetites, took mercy on us and gave us two 😛 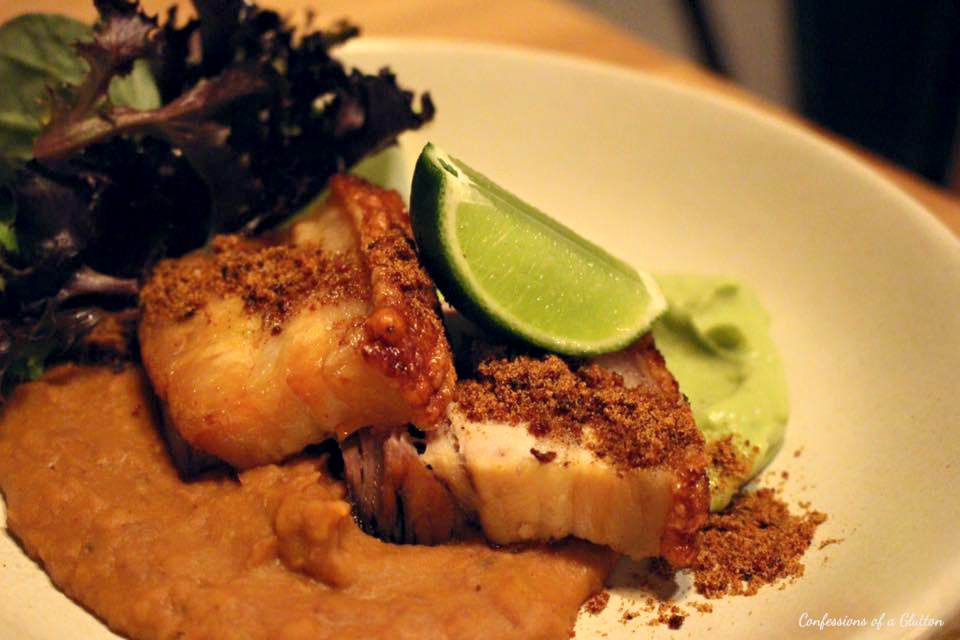 The red puré tasted like a puré made of some variety of bean, while the green was a coriander-avocado combination. The pork belly was ridiculously tender and succulent, melt-in-the mouth fat and a wonderfully crispy and crunchy crackling that shattered in the most satisfying way.

Onto dessert! I had stalked La Puerta’s Facebook Page earlier and seen the Pastelitos ($12): guava compote filled pastries topped with vanilla bean ice cream and dulce de leche. I love guava and I love dulce de leche, so of course I had to get it.

I think I would have liked more guava jam in the little puff pastry pockets, as the generous lashings of dulce de leche slightly masked the delicate fragrance of the compote. It was delicious and a slightly sticky mess as you had to pull apart the puffs with your fingers; there was no way that a whole puff could fit in your mouth!

Our second dessert which Catherin had recommended we try was the Merengon ($12), La Puerta’s take on the Australian pavlova with seasonal fruit and exotic flavoured ice. The two ice cream flavours they had for the evening was lulo and soursop.

The bottom scoop was the lulo sorbet – green in colour with a citrus flavour. I looked it up online and the lulo is also known as a ‘Naranjilla’ or ‘little orange’ and native to the Andes mountains in Colombia, Ecuador and Peru. It has a leather-like orange skin covered with a hairy fuzz, while the inside looks like a green tomato – which explains the colour of the sorbet. The sousop ice cream on top was creamier in texture, as the soursop is a variety of custard apple, common in Mexico, Colombia, and Venezuela. Both were extremely refreshing and combined with the crunch of the baked meringue and berry coulis, made for a very well-rounded sweet finish to our meal. It’s lovely to see dessert items so different from the ever-present churros; I would come here for the desserts alone… together with an Argentinian beer!