If you are a follower of me on Facebook or Instagram, you probably would have heard the news by now: I have been shortlisted for MasterChef Australia Series 8 Top 50! I will have to wait until close to the end of September to determine if I go through to the next round – the judge’s auditions – but in the meantime the producing team have given us a hefty homework list of “basic” skills that they think are perquisites to joining the show. These range from making a mayonnaise and knowing the correct quantities for a pancake batter to knowing how to make rough and choux pastry, and knowing the flavour profiles and dishes of a range of international cuisines, such as Indian, French, American, Japanese… also knowing how to sous vide, make a veloute, fillet a fish and debone poultry.

Considering my primary motivation for applying this year was to learn – I guess I’ve gotten what I asked for! Whether or not I do get through to the next round I will work through the list regardless; the constant learning process is a wonderful thing.

I’m probably the most terrified about memorising my pastry recipes off by heart. Pastry and baking is that one of those few areas in cooking where you cannot bluff as you go along, adding spices, more flour to thicken, etc. I was talking to another shortlisted applicant last week about it, as he preferred to make desserts as well, and he said he had found a book a little while ago called Ratios by Michael Ruhlman, who basically says that it’s basic ratios and fundamental techniques that makes all food come together. In knowing the basic quantities of ingredients that go into a recipe and nailing the technique, he can essentially walk into a commercial kitchen with two A4 pages of ratios and make an endless number of dishes. I’ve ordered the book off Kinokuniya – I just hope it arrives soon!

It will be some time yet before I can even attempt to make pastries like Anna Polyviou, head pastry chef at The Shangri-La Hotel, Sydney. Kulinary Adventures of Kath and I have been drooling over her lavish, colourful creations for some time now, but had not yet found an opportunity to experience the hotel’s renown afternoon high tea until now.

High tea is served in the Lobby Lounge, located on the ground floor of the hotel. It’s a comfortable, spacious area with soft, squishy seats – seats so squishy you sink into them with not much prospect of being able to haul yourself back up. There’s a nice little garden outside but I’m not sure if they extend the seating out there in the warmer months.

We look longingly at some of the cakes on display at the cafe counter, but adamantly stay with our order of the standard afternoon tea, which is priced at $42 a person. It’s $52 per person with a flute of Chandon NV Brut, or $65 per person with a flute of Perrier Jouet Brut Champagne. We decided to forgo the sparkling for the traditional tea, and I selected a vanilla and rose black tea blend, while Kath chose the peppermint for its digestive qualities (always thinking ahead).

The tier took a little while to arrive, and we watched as a few were wheeled into the lobby lounge via a back door – which I’m assuming was the kitchen – draped in cling film. One of the cafe staff brought our tier over and lifted it onto our table with a simple ‘Here you go’, before leaving us to it. I was a little bemused that she didn’t take the time to explain what each of the elements were, and we watched (and tried to eavesdrop) as the other waitstaff explained the tiers to the customers around us – maybe she was just having a bad afternoon.

Kath and I aren’t novices to the high tea scene, and we were a little surprised to see the scones on the bottom tier. But formalities aside, I guess it was time to dig in. As the scones were at the bottom – where you traditionally start first – I decided to start with them.

There were two plain scones and two with raisins. They were quite denser than your regular scones but buttery and crumbly; quite nice with the freshly whipped cream and the accompanying mixed berry jam. It would have been nice to have a little spoon or knife come with the scones for serving. 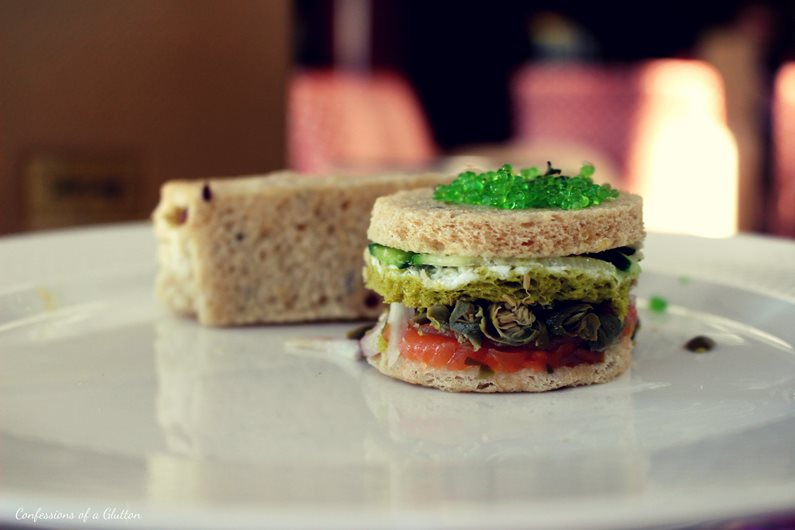 The savouries consisted of a mini Vietnamese banh mi, a mini quiche, a smoked salmon and cucumber tiered sandwich, and an egg sandwich. The banh mi – an unusual addition to a traditional high tea – had quite chewy bread and was a little strong on the spring onion flavour, even with the spring onion removed. The quiche was nice, if a little bland, and the bread on the sandwiches was slightly crusty – indicating the bread had been cut some time ago and left exposed. The savouries were disappointing, and we were both hinging our hopes that the dessert tier would redeem the whole experience.

The upside-down berry friand served with a little pipette of custard and mini-quenelle of whipped cream, and the strawberry panna cotta with macaron were both beautifully presented and served, but were fairly standard flavour-wise. The caramel-coloured cake with its chocolate and orange discs had Kath perplexed, but upon me tasting it I identified a carrot cake base with a apricot gel, and what seemed to be a hazelnut mousse.

The unique interpretation of the classic carrot cake was intriguing, but what stole the show was the little white inconspicuous-looking dessert hiding on the right. A base layer of crisp, coconut macaroon, layered with a berry jam or gel, beautifully delicate discs of tempered white chocolate, perfectly piped drops of coconut milk mousse, accompanied with tiny little chunks of pineapple and mango jelly. This tiny morsel saved the high tea for Kath and I.

For $42, I don’t think I’ll be back again for the high tea; I’ll save that money and buy a couple of cakes at the cafe counter instead in the future.