I’m fighting an ongoing war with aphids in my kitchen garden. I currently have eight little pots of herbs and greenery on my kitchen windowsill: thyme, two pots of mint, two pots of salad leaves, sage, chives, and rosemary. The rosemary – bless it – has been the hardiest, but the others are some of the many replacements I need to make when the devil-spawn fluorescent creatures attack. I learned my lesson the first time I bought parsley – it continued to droop and fade before my eyes despite how much I showered it in water, warm sunshine and potting supplements. It was only when I had the time one weekend morning to take a closer look and saw it engulfed in aphids like a furry layer over each stem. The bastards. They also brought in a steady stream of ants into the kitchen – ants love aphid pee; it apparently tastes sweet.

As autumn approached earlier this year I was dismayed to see my mint – lovingly planted from an offcut I took off the wild bush in the background of my parents’ house – became their next target, as did my thyme. Aphids characteristically do not go for very strong-tasting plants, preferring more floral flavours, i.e. roses. So I was even more surprised when recently I’ve noticed their fascination with my sage and rocket – the latter a particularly peppery variety that even I blanch at if I have too much of. One disgusting fact about aphids is that they are asexual and give birth to live young, so they don’t need to mate to produce offspring; they simply expel miniature versions of themselves. So even if you try and eliminate them, on the off chance you miss a single aphid the next morning you will come back to more; the average aphid produces five offspring per day.

I read online that a combination of chilli sauce, garlic, oil and water sprayed onto the leaves of the afflicted plant repels the beasts, and so I was doing a combination of Tabasco, garlic infused olive oil, and water for a little while and it worked well – until I realised my mint was shrivelling and turning black like burnt potato chips. I looked this ailment up online too (Google is such a God-send) and it told me that mint reacts badly to salt and turns crispy in response.

Damned if I do, damned if I don’t. My only hope is that spring rolls around soon and there will be much tastier game outside for them to focus on.

Anyway, rant over. Onto today’s review post. Night Owl and I have established a regular Sunday routine of sorts where I arrive with takeaway coffee on her doorstep bright and early. By bright and early I mean about 10.30, 11am, but as she’s a bartender, that’s very bright and early for her. Coffee, followed by a spot of sunbathing if it’s available, and then off we go to explore the inner west. Carriageworks, Addison Road markets, Crown Street, my first visit to Gelato Messina..it amazes the both of us just how expansive Sydney really can be. Being a Sunday close to lunchtime though, means that there will inevitably be crowds at the popular inner-west-hipster-cafes, and so it’s often a challenge to brainstorm ideas of where to go for a bite to eat.

It was one uncharacteristically warm morning a couple of months or so ago that she took me to West Juliett for Sunday brunch, It’s a simply furnished establishment: white walls with exposed brickwork and white ceilings to give it the illusion of a bigger space, and reflecting the light streaming in from the high windows. We were standing for a little while near the front counter politely waiting to be greeted and seated, but it seemed like all the waitstaff were busy rushing in and out of the kitchen; I “excuse me”-d a lady passing by and she acknowledged me with a brisk nod and an “I’ll just be right with you”.

We managed to snag some of the last available seats at the bar, where you could see the action going on in the open kitchen, slightly hidden behind a row of pineapples. They do a variety of their own jams and chutneys which you can buy.

We order drinks first, Night Owl going for her second double shot latte of the morning ($3.50):

I have a fairly low caffeine tolerance, and so not wanting to order another coffee I was lured by their Earl Grey Blueflower ($4.00) with ceylon, bergamont oils, and blue cornflowers. It states on the menu that the tea leaves are steeped for three minutes before the leaves are removed, meaning you don’t get that stewed-tea flavour. It was a very fragrant tea and I enjoyed it immensely.

Breakfast appeared to be all day, filled with the usual hipster-suspects: spelt banana bread, French toast with ricotta and salted caramel, dukkah on toast, braised lentils, kale and silverbeet. It’s bordering on fancy but still honest food; wholesome (maybe not the salted caramel) and satisfying.

We were more in the mood for lunch, and Night Owl – who loves some pulled pork on her fork – went for the Twelve hour pork, peach mostarda, pimenton aioli, rocket ($14.90). The bread for the sandwiches are miche  – a French sourdough with a darker, more caramelised crust and chewy interior. It’s safe to say that she demolished this sandwich.

I usually have a rule of never ordering something that I can make at home, and chicken dishes are one that I tend to steer clear of – as how easy is it to make good chicken? But I was drawn to the Roast chicken salad with charred corn, parmesan, radicchio, snow peas, and pimenton aioli ($16.90), and it came out beautifully presented with that amazing roasted chicken perfume.

With perfectly crisp skin, the maryland was cooked wonderfully, tender and the meat slicing easily off the bone. The corn was buttery and smoky with its charring, popping sweetly with the creaminess of the spiced aioli and the bite of the Parmesan. This salad is something I may try and replicate soon for lunches in the upcoming warmer months.

We were very satisfied with our lunch at this stage, but if you were in the mood for something sweet their front counter is stocked with house-made goodies, including Sydney’s apparently most Instagrammed cookies. Another time, maybe 😉 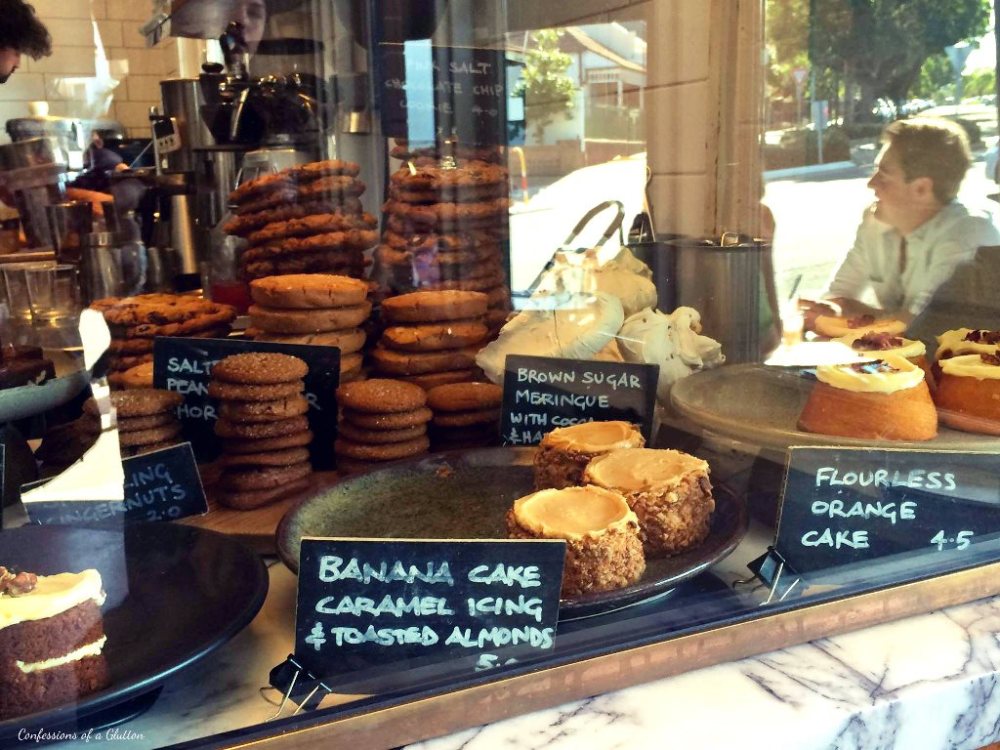