With winter having well and truly arrived early for Sydney, there is really nothing better than comfort food. Yesterday evening my brother-in-law made the most beautiful pappardelle bolognese, with thick ribbons of hand-made fresh pasta. His first ever attempt no less, and cooked perfectly al dente. I’ve personally only attempted to make pasta once for a tortellini and with the disastrous results that eventuated, I have since been sulking and haven’t touched my pasta machine, With his encouragement though, I think it may become a new project of mine as the colder months progress. I’ve also been wanting to make proper gnocchi for some time, but I think it’s going to be one of those all-day-at-home adventures. So for the meantime, I’ll settle with indulging in it while eating out 😉

The gnocchi at The Governor’s Table was one of the reasons why I had returned to the venue. My first visit was a pants-busting PR affair, and I was looking forward to going back over the revised seasonal menu and enjoying it at my own pace. It was an icy cold, blustery Sydney evening and I had brought The Sister and her hubby along for the ride. I was the first to get there, and while I waited I spoiled myself with a Negroni ($18): Bombay Sapphire, Campari, Martini Rosso and orange slice.

One of the most refreshing and potent Negronis I have ever had the pleasure of enjoying. The Sister arrived just as I was savouring it and decided to get herself a mocktail, the Spirited Arabanoo ($10): passionfruit, watermelon, cranberry juice and honey.

The brother-in-law was in the mood for a beer, and selected a Governor’s Ale ($9), from The Rocks Brewing Co, NSW:

We ordered all of the dishes to share between us, tapas-style: one of my favourite ways of dining. I was keen to start on something light, selecting the Kingfish Crudo, Pickled Okra, Wakame Salt, Spicy Finger Lime Dressing ($24): 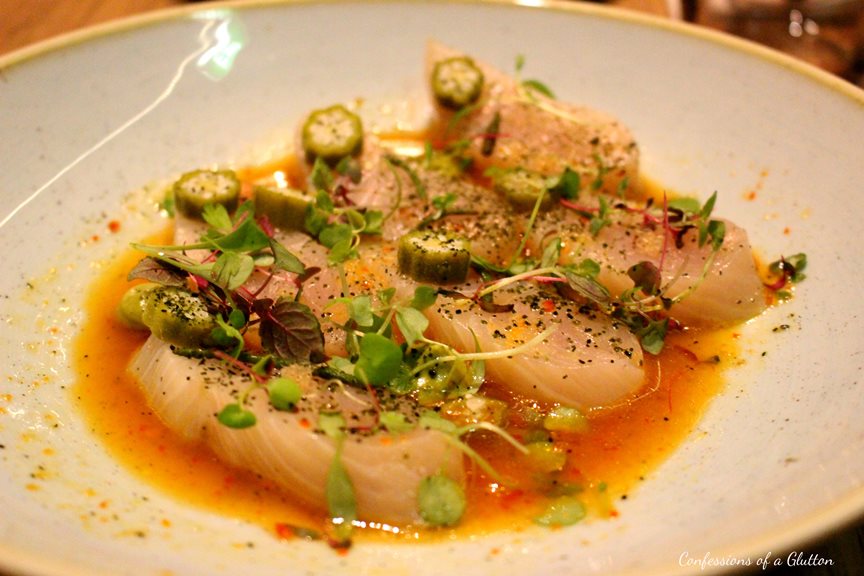 The dish was exactly like a new take on a classic kingfish jalapeno, with that gorgeous umani tang from the wakame salt and the salty-sour bite of the okra. The kingfish was beautifully fresh and meaty, cut into thick slices and just slightly cured from the zesty lime dressing. This was the perfect dish to start off a meal with.

Of course, I insisted we get the Potato Gnocchi, Zucchini Flower, Pine Mushrooms, Curd and Macadamia ($26): 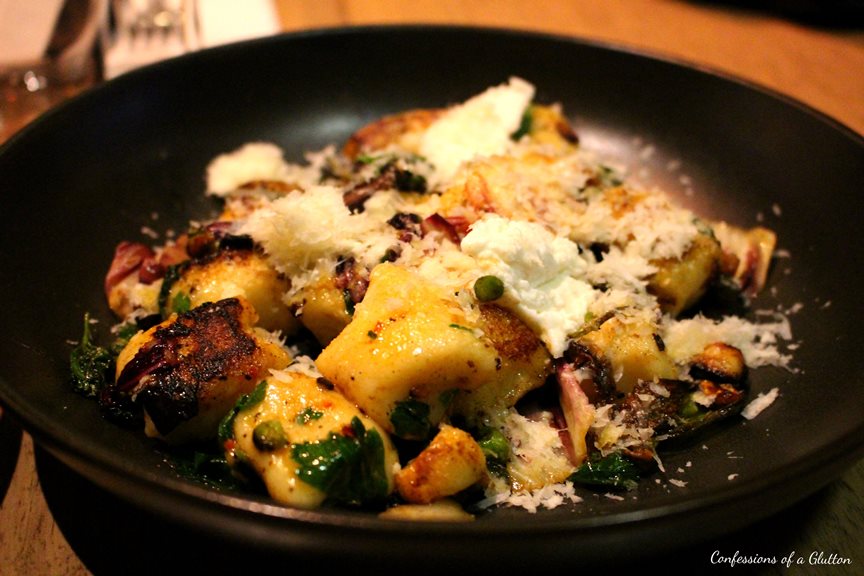 Cheesy, soft pillows of potato, bits of crunch from charred edges where the gnocchi had been lightly panfried, earthy caramelised mushrooms, delicate zucchini flowers and the fragrant oil from the macadamia all tied together to make one extremely comforting dish of goodness. The Sister said she would have loved for the gnocchi to have been crispier, but I was very satisfied with the mis-mash of textures and homely flavours. 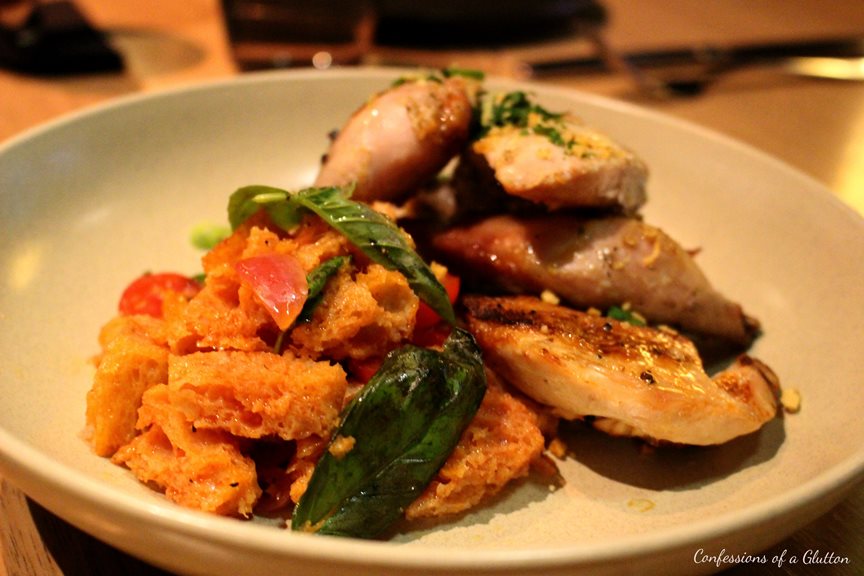 Quite a light dish in comparison to the gnocchi, but still with lots of flavour thanks to the basil, the spatchcock had been beautifully roasted; the skin lightly crisp and the slightly gamey meat still succulent and juicy.

And because I’m an absolute potato freak, I insisted on getting the Fried Sebago Potatoes, Salt and Vinegar, Aioli ($10). Potatoes in any shape or form are my weakness.

Crispy and crunchy on the outside; the batter was quite thin and it gave way to such soft, pipingly-hot, creamy innards it was like mashed potato inside. With the aioli, they were the bomb.

Dessert took a little while for us to choose. 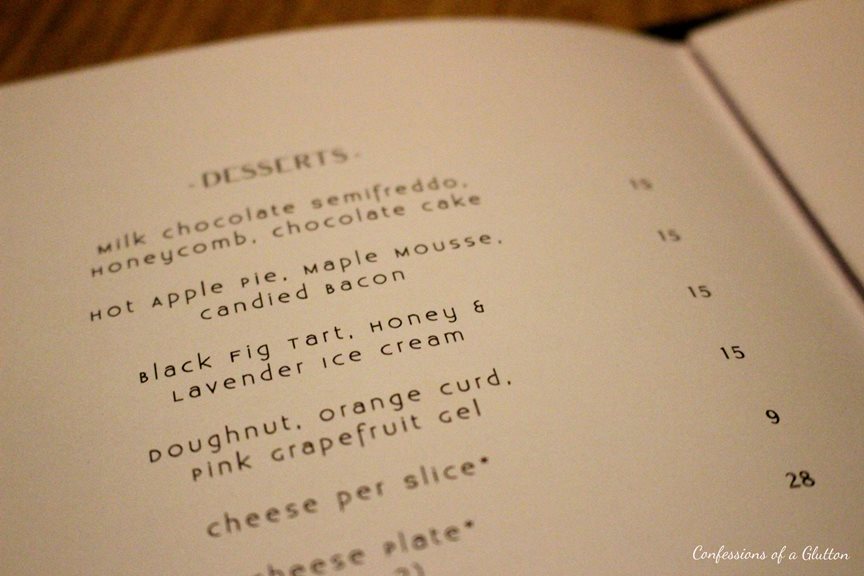 The Sister went for the Black Fig Tart, Honey and Lavender Ice Cream ($15):

It was a frangipane tart, with a buttery base and wonderfully caramelised fig deeply embedded into the centre. I adored the lavender ice cream and polished it off. More so because the brother-in-law was all over the dessert I had selected, the Hot Apple Pie, Maple Mousse, Candied Bacon ($15); which he had dismissed when he saw it on the menu, saying it wouldn’t work. But I had gone with it, because who doesn’t like a good hot apple pie..? 😉  It was a lovely little thing; soft sweet apple in buttery shortcrust, a light-as-air-mousse and the candied bacon adding a sweet-yet-unusually-meaty-in-a-good way element to the petite dessert. Such a delight.