It’s too natural to hear people complain and mutter every day about the things around us: the state of Australian politics, how the trains are broken down or behind schedule, how expensive fruit and vegetables are, the price of petrol, increasing housing prices, and our dilemma that we can no longer have berry smoothies for breakfast after a raspberry Hep A outbreak. It is not often that we take a step back and realise that in comparison to so many people around the world, we in Australia have life particularly easy. Not having our personal, private correspondence or news censored, the ability to practice a religious faith without fear of persecution and access to a huge variety of fresh fruit and vegetables across the year thanks to our fantastic climate.

Australia is a safe haven for people seeking relief from military and political upheaval and unrest. However even after the struggle of applying for a refugee visa, settling into life here is not so simple for many refugees. Many highly-skilled and qualified refugees arrive in Australia as medical practitioners or scholars, but then have to join a highly competitive job market catered predominantly to the English-as-a-first-language group.

Enactus Sydney are seeking to create opportunities for these refugees. A group of students, academics and business leaders, they are the entrepreneurial group behind Culinary Tales. Culinary Tales provides refugees with work experience by employing them to teach a cooking class to showcase their home cuisines, allowing interested members of the public to learn new ways of cooking, and at the same time absorbing the stories of these people who have needed to flee their home countries. Food has always had a tangible role in forging links to connect a diverse range of cultures, and Sydney in particular is well-known for the huge variety of culture in our food scene.

I was lucky enough to be invited to one of the classes held at the Living & Learning Centre, Lane Cove, where the theme of the class was Tibetian vegetarian cuisine, taught by Tashi; a refugee who arrived in Australia on a student visa in 2008. Friendly and enthusiastic, he’s qualified in Hospitality Management and introduced us to Vegetable Momos: a vegetarian dumpling often had during special occasions and festivals in Tibet. He had already made the dumpling dough for us, and proceeded to show the members of the class different ways of pleating the dumplings. In our first run, we used small balls of dough as the “filling” just while we practiced. 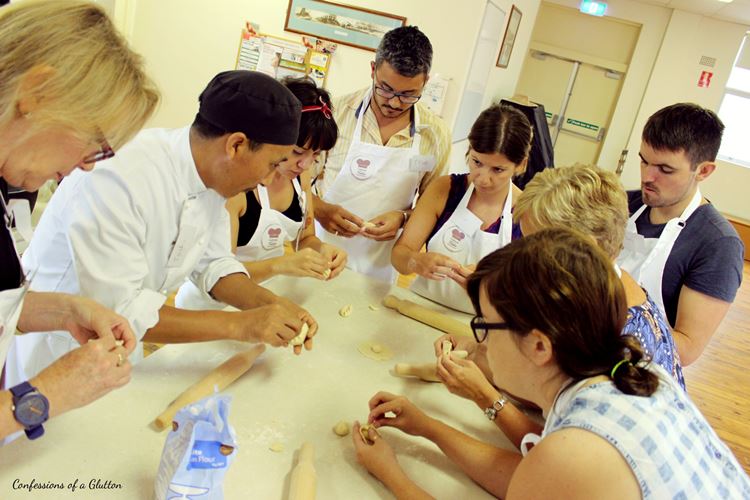 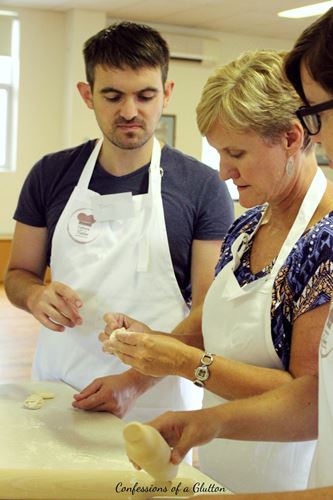 There were lots of laughs and giggles as misshapen momos were created, but everyone kept going at it, with Tashi demonstrating a few more times. His precise and deft movements of pleating the dumplings were so rapid that you had to watch very carefully! After a few more goes each, Tashi must have decided that our momos were of sufficient quality (or maybe that we were running out of time!) and so brought over the vegetarian filling over for us to pile into the circles of dough. The finely chopped filling was fragrant and fresh, a mixture of wombok, tofu, shiitake mushroom, onions, carrots, garlic and ginger. 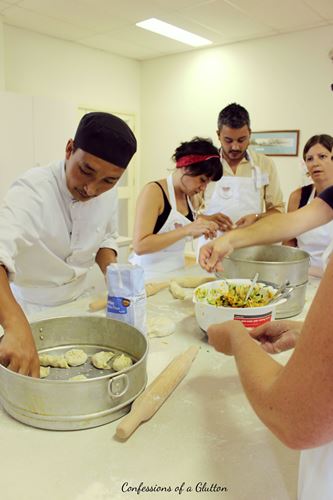 We made enough momos for two rounds of steaming! As we waited patiently, we all helped out with the cleaning up and then Tashi proceeded to run us through the makings of a Sepen Chilli Sauce for dipping the momos in later. It’s a smokey, gloriously spicy sauce with garlic, spring onion, chilli powder and soy sauce.

The momos didn’t take too long as they were vegetarian dumplings. Tashi shook them out, billowing steam, onto large platters for us to share from.

And as a reward for our efforts, we pushed together a couple of tables and sat around in a group to enjoy our hard-earned meal. I loved the deep flavour of the sauce but it had an incredibly spicy kick that crept up on you and it was quite exhilarating.

As we sat around and digested our meal, Tashi shared a little of his story with us; what life was like growing up in his village of Drongsar with a large family of 12, leaving home at 19, the trials of crossing the Himalayas to Nepal, and the shock in climate when he arrived in India. There were sombre moments; Tashi describing how hard it was not having seen his family in such a long time, and how he had to be careful in what he said when he called them due to telephone tapping. But then there were also more light-hearted stories such as his surprise and disbelief when he discovered that the basis of the delicious Indian vegetarian dish dhal was made of lentils; a pulse that his family – as nomadic farmers – fed to their animals in Tibet.

Overall, it felt like the few hours that the class went for had flown by. You chat to the other class members and discover their reasons for being there, whether it’s to learn some new cooking techniques or if it’s just for some weekend fun, pick up new skills and expose your palate to new flavours, and share the story of someone whose upbringing and transition through life has been so wildly different to your own. I believe it helped to put things into perspective a little; we often concentrate so hard on the minor difficulties and trials in our lives, yet take certain things for granted and fail to appreciate and be thankful for the opportunities that we do have.

I would highly recommend any of the Culinary Tales classes to anyone. March is sold out, but you can view the classes in April on the link here.