In the period between Christmas and New Year, The SIster and I had taken the opportunity to escape the big smoke of Sydney and headed west for the cooler, quieter seclusion of the Blue Mountains. Going for a drive out of Sydney is one of my favourite things to do; it’s the holiday without requiring a large amount of expense or travel – yet you still get that feeling of being a million miles away from persistent schedules, commitments and headaches…especially when you go out of mobile reception range 😉

Leura Garage is a cafe/wine bar that I’ve been wanting to visit for some time. It was under construction when I last visited a couple of years ago, and the word on the street is that it’s now a hugely popular spot for locals and tourists alike.

We came here for dinner on our second night in the mountains, and it was reasonably packed out. A booking had allowed us to secure two seats at the bar, where we got to watch the hustle of drinks service and the rather quiet main kitchen through the service window.

The place, being called “Leura Garage”, was decked out with stacked tyres, piles of rusted exhaust pipes, and various pots of greenery scattered around the establishment, with the waitstaff and barstaff dressed in garage mechanic-style shirts. It’s quirky and endearing – something I wouldn’t be surprised to see in the inner western suburbs of Sydney, but a big surprise for the small town of Leura. 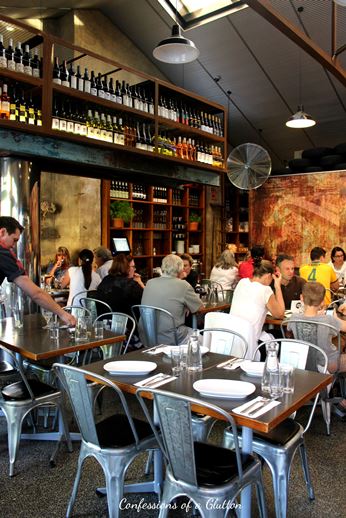 I start dinner with a Hillbilly apple cider on tap ($7.50). I’ve only had it in a bottle before, but it was on tap here and Hillbilly cider is made and produced in the Blue Mountains so I couldn’t resist trying it. It was refreshing, crisp and quite light on the palate; no cloying sweetness or aftertaste. 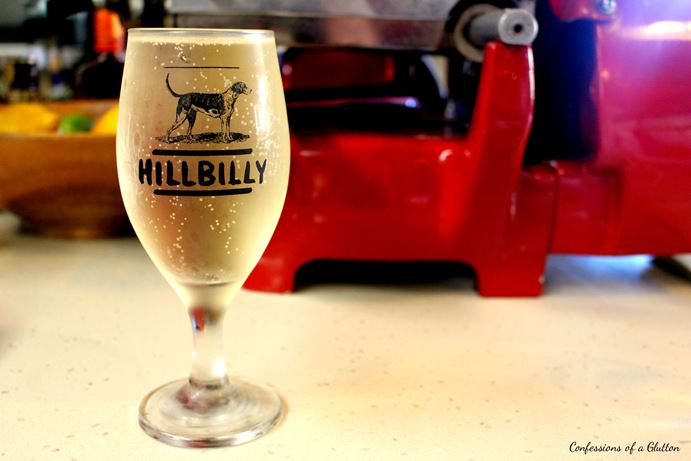 The extensive dinner menu suits a wide variety of tastes, clearly split into seafood, meats, pizzas and sharing boards. Our food orders take little time to arrive, with the first being the Tasmanian Spring Bay Mussels, with garlic, Napoletana, thyme and rustic bread. From memory, this item was about $20 on the menu.

Piping hot, salty and sweet at the same time, there is seriously nothing better than that ritual of digging into a mussel with your fork to separate the tender flesh, dipping your spoon into the rich tomato broth scented with aromatic garlic and delicate thyme and mopping up the juice left from the mussels on your plate with a piece of torn bread. It’s messy, salty, sweet and rewarding all at the same time.

There were two small pieces of bread that came with the dish; it would have been lovely to have more as there was a lot of the sauce left, but as good as it was it was also quite salty and we knew it probably wasn’t great for us to have that much of it! But it was lip-smackingly great.

Next to arrive was the Pesto Arancini ($18) with sundried tomato, sweet spiced relish, herbs and Parmesan crumble. 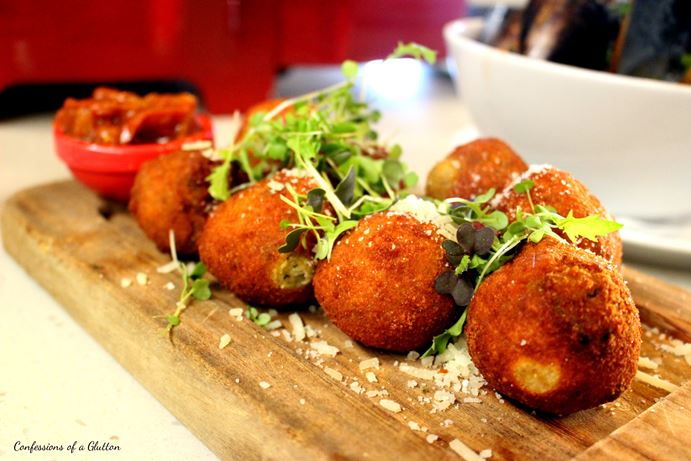 Rewardingly crispy and crunchy on the outside with that first bite, the soft risotto inside was steamingly hot – meaning a few moments of “haaa-haa” with my mouth open as I frantically reached for my glass of water. With the sweet tomato (or capsicum?) relish and the pesto risotto, there were a lot of punchy, strong and popular flavours that I can almost still taste right now. It’s a predictable Mediterranean combination, but it’s always such a winner.

The third and last dish that we had ordered to share for dinner were the Dubbo Free Range Sticky Chicken Wings ($19) with Logan Brae Orchards Blackheath Honey marinade and chipotle mayo.

I picked them up with my fingers and went at them, but my sister somehow managed to eat them with a knife and fork – dainty as anything (sitting straight-backed in her bar stool too, might I add). The wings were so tender, smoky and lingeringly sweet, with little charred pockets that I couldn’t help but gnaw at. I eventually took a leaf out of my sister’s book when my hands and napkin were smeared with the glorious honey marinade after two wings. But it still was messy regardless because I slathered on the chipotle mayo generously; loving the warm and spicy glow of the suntan-yellow creamy sauce. Afterwards, I even smeared it onto the remainder of the arancini!

With dinner being such a success, we decided to come back for lunch the next day as well for a quick meal before we headed back for Sydney. There was a line already, but when I requested a table for two I was seated immediately with a broad smile and “here you go, darl” as it seemed that the line was caused by larger groups. I could see long, social tables packed out in the place, with all of them sharing a few pizzas. So we decided to go for one too.

The Nundle Smoked Trout ($28) was a blonde-based pizza topped with creme fraiche, Spanish onion, capers and rocket. Oh, and flaked pieces of smoked trout, of course.

I really enjoyed the combination of the flavours on the blonde base – the smooth, slight sourness of the creme fraiche cutting through the saltiness of the trout yet enhancing that woody smokiness from the fish. WIth a generous amount of rocket and Spanish onion, it added a zesty freshness to the pizza so it didn’t feel too heavy after even a few slices.

The base was good too – not as crisp nor thin as I’ve had previously, but chewy and moreish with a wonderfully fragrant – almost buttery baguette flavour meaning that I even ate all of my crusts.

As we were only having a light lunch, the only other dish we had ordered was the Roast Chickpea Quinoa Salad ($19) with tomato, eschallots, red peppers, Fresh First Farm organic herbs and lime cheek.

The lime cheeks were a little short on juice but unsurprising considering how dear citrus fruit is these days. The salad was nutty, textural and full of different flavours. The various fresh herbs added different levels of bitterness, sweetness and aromatics similar to aniseed and fennel to the quinoa and roast chickpeas; it was really a guilt-free, tasty salad.

And to finish it off, a skinny latte ($4.20) with Umami Coffee, with their blend of Ethiopian and Brazilian beans. A pleasant coffee, but I usually prefer a richer, earthier more chocolatey taste. I did raise an eyebrow at the price of $4.20 for a small latte – a price that would be considered expensive in the Sydney CBD.

Overall, it’s a charming, bustling cafe and wine bar that really adds a touch of Sydney’s inner-west to the leafy garden suburb of Leura. The menu is so diverse that it caters to any tastes, whether you’re craving the wholesome, grounded flavours of the Mediterranean or wanting something more adventurous like a seafood board. If you’re coming on a weekend or during the holidays, I’d recommend that you make a booking in advance.