I’ve heard so many food bloggers go on about this place. I had been wanting to see Catching Fire in the first week of its release, so after buying tickets on a Cheapskate Tuesday for the George Street cinemas screening, I thought it would be a good opportunity for a quick and supposedly cheap feed. I had Brother Bear in tow, who had duly agreed to come watch the movie with me and dinner was on him as I had bought the tickets.

Menya Mappen is located in a little food court filled with other Asian restaurants. We are close to Chinatown, after all. There’s this big menu board out the front. Basically you choose which one you want as the base, and then there’s a hot bar of tempura items for you to choose from as you slide along the bar with your tray, American cafeteria-style.

I chose the Bukkake Ontoma ($4.90) – because that name just made me raise my eyebrows. If you don’t know why, Google it. It’s plain udon with a melty barely soft-boiled egg. The guy dishes it out to me in literally two seconds – strained out ready-cooked udon noodles with a ladle into the bowl, cracked an egg over it with one hand from the pile of eggs beside him, slice of lemon, there you go. I’ve only ever had udon in soup before, and having it dry with a bit of lemon is curiously refreshing and allows you to enjoy the silky, slippery texture of the thick noodles.

Brother Bear has a larger appetite than mine, so went for the Kara-age ($6.90). The chicken had already been deep-fried and was sitting at the hot bar with the other tempura items. If you’re going to be the type that’s finicky about your food not being made to order, this might not be the place for you.

We dutifully took our trays and slid along to the glowing hot bar of fried goodness.

And this is probably where the “Oh, it’s so cheap, you can eat for under $10” comment blows out. Because if you’re like myself and Brother Bear, they all looked good and you’re likely to choose quite a few things from this rack, which adds up.

The tempura was crunchy, and warm…I’d say about 60% warm if 10% was cold and 100% you’re going to burn your mouth. Which – considering its been sitting under the heat lamps – isn’t too bad. The prawn tempura wasn’t bad either, although the batter was a little too thick. If I came back, I would go back for the wide range of vegetable tempuras; I wouldn’t take the risk with chicken. But the sweet potato was my favourite. You can’t go wrong with it. 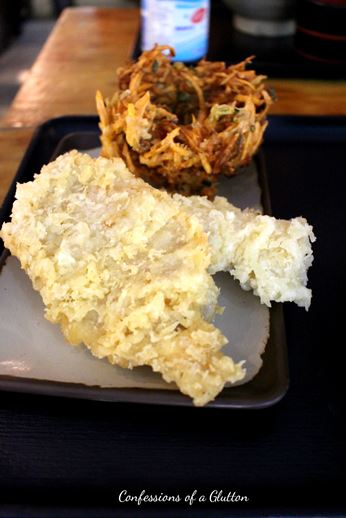 Move your trays to the end to pay, and there you can have a big scoop of tempura batter flakes and chopped spring onions. Make your scoops generous, as it’s once only! Cough up some money and there’s a water dispenser to the side if you’re in the mood to quench your thirst whilst you eat. Dining is cafeteria-style too, in keeping up with the theme. Long wooden benches and tables, boxes of tissues bought from an Asian supermarket dotted around.

Overall, it’s cheap(ish), brisk service and most importantly – fast. If you need, like us, a quick bite before a movie or you’re on the way home from work and not in the mood to cook, this would be an ideal place. Visit early on in the evenings as I’ve heard it can get quite crowded with teenagers and the uni crowd.