It’s funny how you can develop a taste for certain foods. Five years ago, I never touched sashimi, and now I wolf salmon nigiri down as though it were sweets. You could not have paid me to ever touch fresh oysters, but faced with my first oyster at a food event mid-this year, I slurped the slimy thing down and was surprised to discover that I actually didn’t mind it that much (although in fairness, it was drenched in a vinaigrette and topped with slivers of pink ginger).

Thai food is one of those things I’ve avoided most of my life, not really due to any particular dislike, but mostly from disinterest. The presence of Thai food in Sydney is seemingly now at its peak, with online takeaway websites reporting that more Australians are ordering Thai for dinner over the old-favourites of pizza and pasta. My early Thai experiences consisted of tasteless Pad See Ew and Pad Thai – smothered in bean sprouts (a vegetable I’m not particularly fond of) and cooked with the lightest of soy sauces. They lacked the true “smokiness” that I now know that they are required to have. And then my other Thai experiences have involved “fusion” restaurants, one where upon my request for a seemingly harmless seared tuna salad, it arrived piled with coriander – my absolute food nemesis.

Food education is such an important element of life though; to keep trying different things and finding out what you do and don’t like is of utmost importance – enjoying a varied diet is such a pleasurable thing in life. As a result of testing my food boundaries this year, I’ve developed a heightened tolerance of chilli thanks to my babe of a friend Dancing Queen making me home-made Indian curries, as well as my new love of Mexican cuisine. I’ve also discovered coconut milk is the bomb.  So hello, chilli basil noodles and Thai curries 😉

I’ve made a new friend recently but I have not yet given her a pseudonym – for now, let’s call her A. A was up for dinner and I suggested she introduce me to somewhere I haven’t tried before – perhaps a Thai restaurant? She suggested Home Thai and I agreed. I remembered last year Brother Bear had dismissed Home Thai as an option for our dinner, saying it would be too spicy for me; I was secretly hoping that I would dispel that assumption. 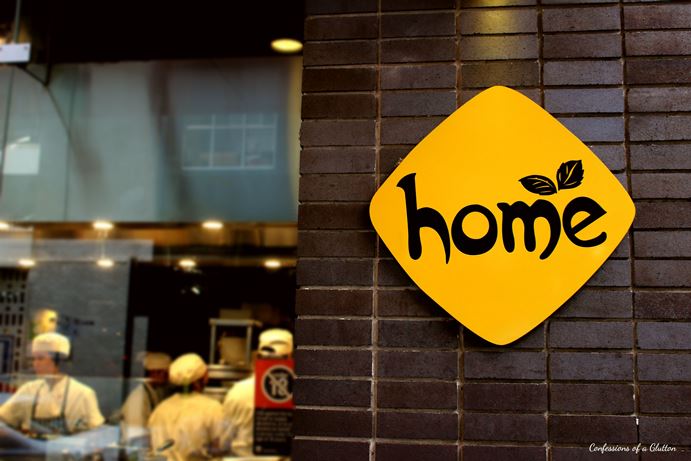 Home Thai is located on Sussex Street, takes no reservations, does takeaway, and it’s BYO (wine only) with $4 per head. $30 minimum on EFTPOS, no AMEX, no split bills – it’s all set out a little pedantically on their website. For a restaurant that has such a roaring trade that it’s got a waiting list spilling out onto the street before 6.30pm, I would have thought they may be a little more flexible.

A wrote a “2” on the waiting list, which somehow came out looking like an “8”, and after a few attempts to fix it, scribbled it out and wrote “2” again beside it. She went to tear off the ticket slip, and tore off the ticket slip of the sheet behind it too. Snorts of laughter ensued.

We didn’t have too long to wait, and while we did we were able to look through the large glass windows of the front of the restaurant, where the open kitchen was situated. There was a large deep fryer directly in front of the window frying what looked like some sort of pastry, and as I was snapping photos the female chef attending to the fryer spotted me and grinned, laughing. 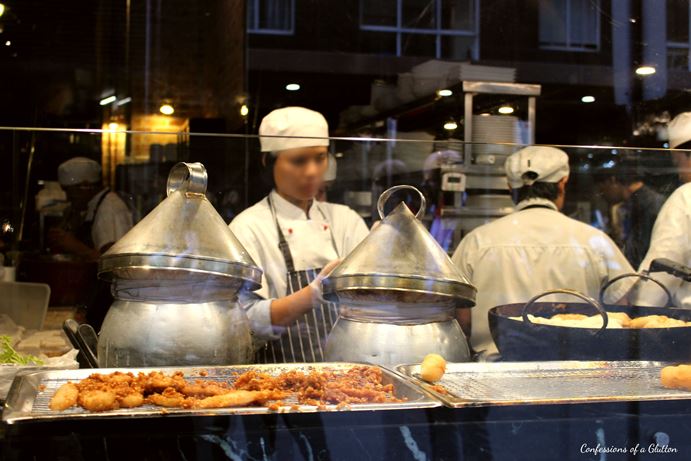 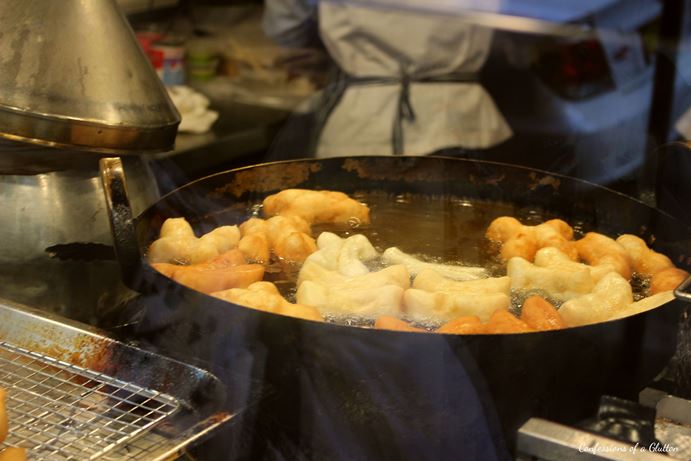 The wait was only about 15 minutes and once we got in we got a seat right beside the front street-view facing glass, which was a relief as the inside bottom floor was packed and seemed a little claustrophobic (although some may find it cosy) towards the back. There was also a top floor but I didn’t get the opportunity to go up and check it out. It’s all contemporary hard surfaces, and with the restaurant packed out the noise level was very high, the sound bouncing off the walls and the floor without any cushioning. A and I spent our dinner almost shouting at one another; not yet nightclub noise degree, but close enough. 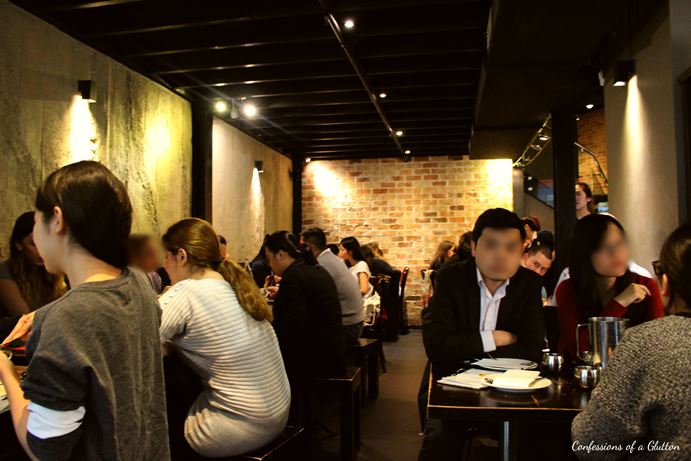 A and I had already discussed with each other our regular go-to Thai dishes, and so when the menus were placed in front of us, we already knew that we were having the Massamun Beef and the Fried Rice. I suggested a vegetable dish to even it up, and we agreed on the Stir-fried Chinese broccoli with crispy pork belly – because pork belleh! 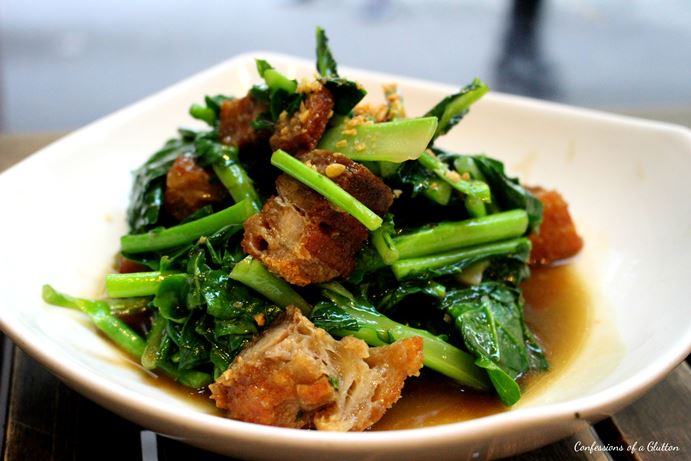 When I described this dish to The Sister at a later date, she laughed, saying that the origins of this dish are inherently Chinese. Basically meat used to be so precious that people would use scraps of meat and lard and toss them with vegetables to make it more substantial – although it probably wasn’t glorious pieces of crispy pork belly back then 😉 The pork was tender and crispy-skinned; it was a shame there was so little of it! The broccoli had been tossed through with oyster sauce and fresh chilli so it did have quite a bit of heat which I enjoyed but A not so much as she had a lower chilli tolerance. I actually took the leftovers of this home and had it with a scotch fillet marinated in home-made Teriyaki sauce. So good!

The Massamun Beef ($14.90) was the next to arrive, a glorious pile of slow-cooked beef chunks in Massamun curry gravy, drizzled with coconut milk. 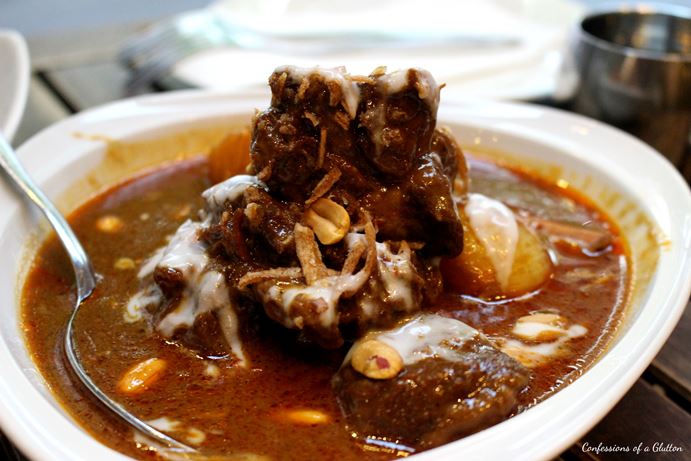 The curry had been cooked with potatoes, onion, peanuts and topped with a flavoursome crunch of fried onion. It was creamy, moreish and oh-so-good. The beef was braised to perfection, falling apart easily with the nudge of a spoon. There was not a single shred of fat or gristle. 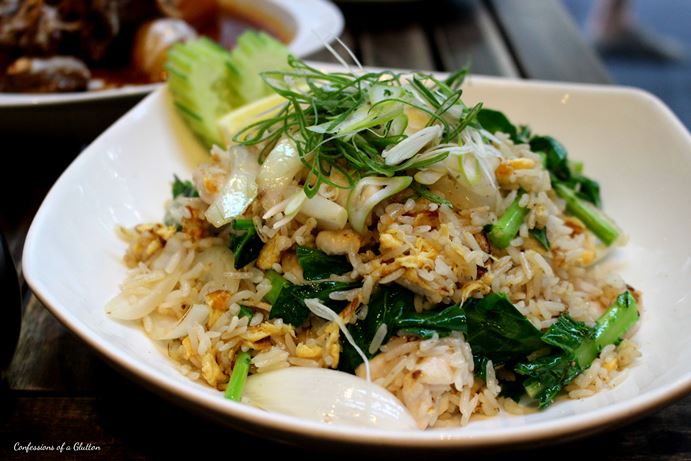 I’ve never had Thai fried rice before. This had chicken with tomato, onion, Chinese broccoli, egg, black soy sauce (as if soy sauce came in any colour other than black?), served with cucumber and lemon. If you’re used to Chinese fried rice being the food court style with peas and corn and carrot you would find this version incredibly, about a thousand times more flavoursome. A generous amount of sweet onion that was cooked quite softly while there was still a fair amount of fresh crunch with the broccoli. It was good – but I think I make a meaner fried rice…with bacon, shiitake mushrooms and bamboo 😉

We were fairly full at this stage but were curious about dessert. The Thai doughnuts with Pandan and Coconut Sauce (I forget the price) we identified as the pastries we had spotted being fried at the window earlier, and so we chose to try those. 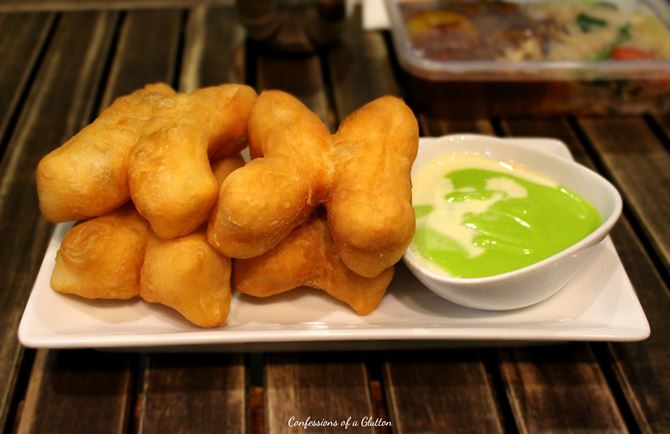 The doughnuts arrive warm. Fluffy and airy on the inside, crispy on the outside, the accompanying dipping sauce that wonderful shade of green that pandan is. We broke off pieces of the doughnuts between our fingers before smothering them generously in the creamy sauce. It actually reminded me a lot of eating churros, with the pastry similar to the Taiwanese “you tiao” commonly had for breakfast – a fried plain baguette broken up and dipped into congee or freshly-boiled hot soy milk.

Overall, it was an extremely satisfying Thai feed and I’m sure I’ll return here again as the Sydney weather stays this beautiful to try their chilli basil noodles. Few things are more enjoyable in life than a plate of punchy flavours, a warm Sydney evening and a glass of chilled white 😉 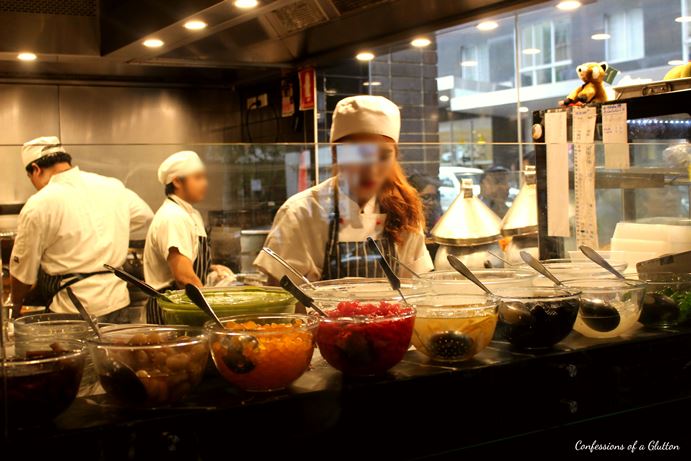