When I was a toddler growing up into a child in primary school and into my early high school years, there was one hobby I always turned back to: sketching and painting. I drew so much when I was a toddler on every available (and non-available) surface that I could find, scrawling animals (particularly dogs, I was besotted with drawing dogs), landscapes, cartoons, people, flowers. One of my aspirations was to become an “artist” when I grew up. Then when I went to high school I had an arts teacher who was very much into abstract art and dismissed my perfectly-painstakingly-well-proportioned feathery sketches as “good copies”, favouring the bold lines and random splotches of colour on canvas done by my peers.

That has never been my style and I’m sad to say that now i realise that was the point where my desire to draw and sketch with passion waned. My watercolours cracked in their palettes and  dulled, my brushes became bristled and coarse, forgotten at the bottom of the arts and crafts box in the back of my old room. At that time, I would have turned my free attention to your typical late teenager obsessions – hunky actors and music with lyrics that make you cringe. That creative element of me was subdued.

I smiled to myself the other day when I realised that it was back. Is not my desire to create a perfectly iced cake creative? Is there not something artistic in achieving the most beautifully plated dish so that it resembles a miniature garden? I’ve always had such a strong creative streak within me, and it’s so good to see that I’ve now got another outlet through which to channel it.

A well-plated dish is really one of the most beautiful things you can ever imagine, and this is where I turn to today’s review: The Dining Room at The Park Hyatt.

The family (Dad, Mum, The SIster and my Brother-in-Law) and myself were due for a late/early birthday lunch. Late/early in that we were simultaneously celebrating the past birthdays of my Dad and myself, and the coming birthday for my Mum. The Sister had graciously given me the task of selecting a venue for the occasion and after flipping through our Entertainment Book, I suggested we visit The Dining Room at the Sydney Park Hyatt.

The style of cuisine here is Modern Australian meets French fusion. The waitstaff are French, and the chef is French. The dessert menu has creme brulee labelled as “The Classic” and touted as the chef’s specialty, and yet you have those not-so-subtle Asian influence on the ingredients such as daikon, nori and wasabi. The lunch menu is priced at one course for $39, two courses for $59, and three courses at $69. Certain entrees are priced at another $10.

The waitress who took our order was a little pushier than was comfortable. We had ordered almost three courses each, when she suggested we order a few of the sides. We agreed to order a bowl of salad. Maybe a couple of bowls, she suggested. Just one, we said firmly. And drinks? Wine for the table? No, just the one beer, please. Cue the abrupt removal of wine glasses from the table.

Service for the rest of the luncheon was better. We began the meal with a small warm white sourdough bread roll each, with a two rounds of salted butter placed on our table. We assured the waitress that one would be enough (the butter round being the size of a hotel soap), but she insisted on the five of us having two. If you insist…

The bread was perfectly crusty on the outside and soft on the inside, but before I had even had the opportunity to have more than a few bites, our entrees arrived. It had been so quick! And we all let out a collective “ooooh” when we saw the stunning plating of the entrees; it could only be described as artwork.

The Smoked salmon and nori, watercress and wasabi condiment, green apple emulsion was the most breath-taking. it almost seemed a shame to eat it.

This had been ordered by The Sister and Mum, and as much as they enjoyed it, they lamented that they wanted more…a lot more. Taste-wise, it was described as delicate and also incredibly textural. I didn’t sample the others’ entrees at this point as I had a slight stomach ache at the beginning of the meal and I was struggling with my enormous entree, the Jamon Iberico, roasted figs and lemon thyme, buffalo mozzarella and aged balsamic vinegar.

It’s no secret that jamon/prosciutto goes beautifully with figs and balsamic, but I certainly wasn’t expecting it to come out looking like this:

I don’t know how or where…but those were the most beautiful figs I’ve ever tasted in my life. And I can’t imagine where they would have sourced such wonderful figs, being so early in the season. But roasted, they were so, so delicately sweet and melted away on the tongue like a candy. The aged balsamic was more sweet and flavoursome rather than bitey, but added a wonderful edge to the milky creamy mozzarella and plump flesh of the figs. The jamon was probably a little saltier than I would have liked, but if you were dexterous enough to have a fork with a smidgen of jamon, piece of fig and cube of mozzarella with a small smear of the balsamic, it all went very nicely.

I’m not sure what my Dad (the most conservative in his tastes out of all of us) thought of the Seared blue fin tuna, beetroot and raspberry condiment, dashi and sumac, as he was eating in that silent way he has, but with the plate being cleared at the end of our entrees, I take that as a good sign. 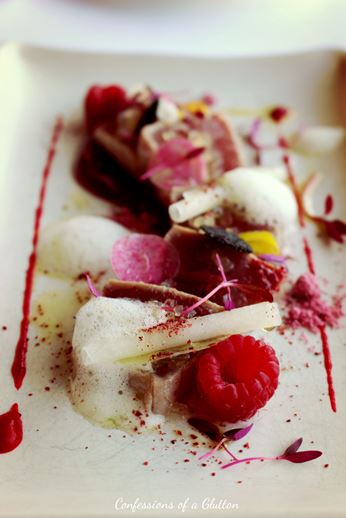 Meanwhile, Brother-in-Law was enjoying his James Boag beer with his Six Sydney Rock Oysters with Thai dressing. While the oysters were refreshing, he commented that the Thai dressing was a little disappointing and didn’t taste like much of anything…just a regular Thai chilli sauce. 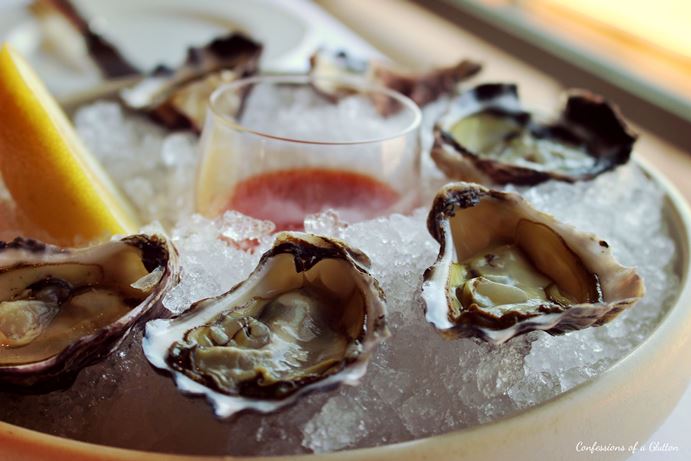 I went for a brief walk around the foyer of the stunning hotel with its marble floors and warm wooden wall paneling, through the sliding doors outside onto the boardwalk along the harbour…looking out at that Sydney piece of architecture: 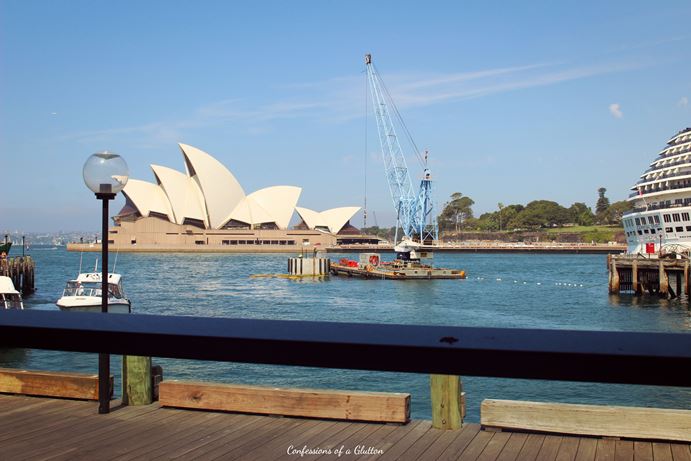 By the way…if you’re sitting by the windows in the Dining Room, I’m not sure how the windows work but the glass only comes up to waist high if you’re standing. It’s open to the harbour air and breeze which was nice on the lovely hot day that we went but it also meant that there was a bit of noise coming from the people walking up and down the board walk, with prams, roller blades, etc if you prefer to dine quietly. I imagine that the windows are closed for the dinner session.

Nary a fifteen minute stroll and when I arrived back at the table, my stomach ache settled, the mains had arrived.

The Sister and the Brother-in-Law had both chosen the Cobia, carrot and ginger mousseline, baby spinach and sesame, orange and mirin. Cobia has also been called “black kingfish” or “black salmon”; being a favourite worldwide gamefish spanning around two metres long. 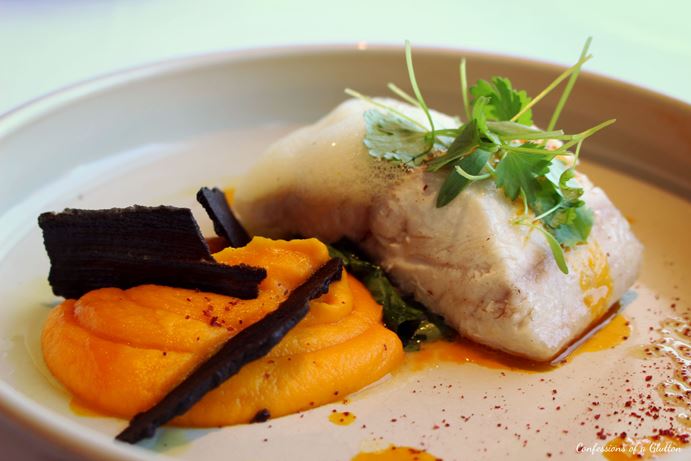 The waitress had described it very much as being like kingfish. I was the only one at the table who has had cooked kingfish before (as opposed to in sashimi form), and this was very similar indeed. Meaty yet quite delicate in flavour. Personally I don’t enjoy kingfish cooked as the meat is not as rich a protein such as salmon or trout and it can become a little bland. Kingfish as sashimi is more my forte. However the carrot and ginger mousseline was smooth and buttery, and the black sesame biscuit added a much needed textural element to the dish.

Mum and Dad also had the same, being the Blue eye and braised fennel, sun dried tomato and preserved lemon, tomato condiment.

They were fascinated by the fennel, never having tasted it before, and adored the tender flakiness of the blue-eye cod fillet.

I was tempted to order the salmon main, but was really craving a good steak. And as this restaurant was headed by a French chef, I had high expectations. I wasn’t disappointed.

The O’Connor pastured fed beef tenderloin, pomme puree, tomato concassee and Provencale condiment was the best dishes I’ve had in a very long time. Perfectly seasoned tenderloin…so juicy and so meaty and so..so…so everything! It was such a prime cut with an incredible hit of flavour. Gorgeous when mopped up with a forkful of the buttery smooth potato puree and a warm trickle of salty jus. Hmmmmmmm.

The Provencale condiment was an interesting element. It truly was a very quirky and unique element to add to the dish, and while I enjoyed picking at the caperberry, bits of anchovy, olive and tomato, the tomato shortbread circle itself was a little strangely bland.

Oh, and I almost forgot. That mixed salad we had been pushed into ordering? Came in a bowl the size of my fist. Very much not worth the $10. I’d suggest you go for the fries if you really want a side. 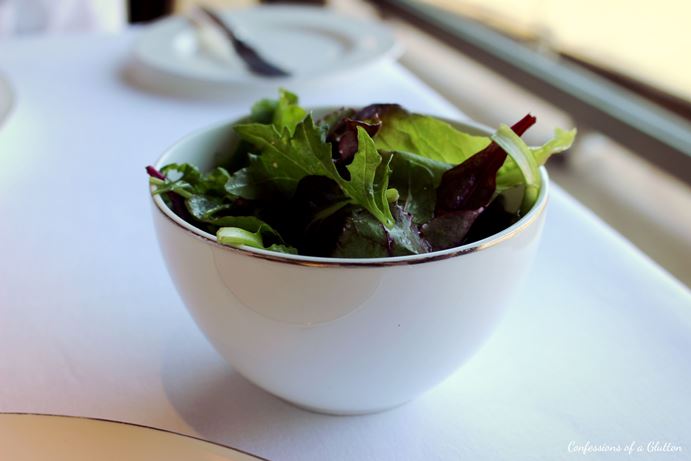 Onto dessert. I had seen photographs of the desserts on the restaurant website and I had my fingers crossed that dessert would be wonderful. It’s never more disappointing than when you can clearly see that the desserts have been tacked onto a restaurant menu as an “afterthought”, without any integration with the courses preceding it. Dessert is not just a mere “sweet hit” to have at the end to round off a meal… for true pastry chefs and pastry appreciators, dessert is an art.

The Strawberry and hibiscus Pavlova, pistachio and chibouste had been promoted by the waitress as the “new spin on the traditional” by the chef.

I don’t know. Beautiful as it was, I’m the type who likes my pavlovas dripping with whipped cream, passionfruit pulp, berries, chunks of heavenly mango flesh and sliced kiwi, so this delicate affair was a little underwhelming.

I did however, quite enjoy the Chocolate Gran Cru, hazelnut and quinoa, raspberry sorbet. 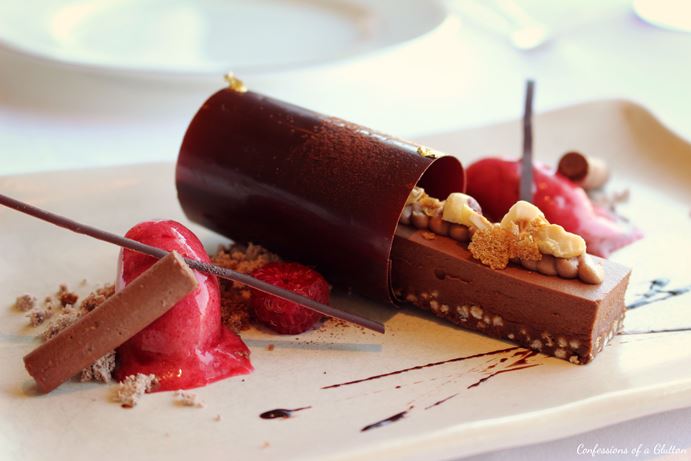 There was a gorgeous puffed quinoa chocolate base, topped with a hazelnut milk chocolate mousse. The rapidly-melting raspberry sorbet gave a feisty kick of fruitiness to anyone who dared label this dish as “too sweet”, and it was the perfect size for a rich, flavoursome dessert.

We were most impressed through, with what was indeed “The Classic”; Creme Brulee, with vanilla bourbon.

Who would have thought all five of us chose this dessert as our grand favourite? Arriving in a dish the size of a dinner plate, the creme brulee was about only an inch deep and the baked pudding actually cold. I had my doubts, as I’ve never had a cold creme brulee, but when I cracked the burnt toffee surface and dipped into the creamy depths below, I was delighted to find a rich, smooth egg custard freckled so liberally with vanilla bean seeds that you could feel the feather-light crunch of them between your teeth.

Pure heaven. It was – without a doubt – the best creme brulee I’ve ever savoured.

We were scraping this bowl clean when a wonderful present arrived from the kitchen in the form of a birthday cake complete with a candle, with the compliments of the hotel.