Happy Friday all! So if you had read my last post on the Coconut and Raspberry Brownies, it was my birthday two weeks ago. I had originally planned a big night out in the city with a bunch of friends, but after a long week at work and a bout of persistent headaches, I was feeling considerably grumpy and hardly in the mood to socialise and be the centre of attention. I canceled the event and spent the next day or two fielding numerous queries from concerned friends as to how I was. My mood hit the bottom of the well when I woke up on Friday, the day before the birthday, with a cold. I should have suspected, but I was too distracted – headaches are always the first sign of a cold and flu with me.

The plus side is that the nearest and dearest of my friends have individually insisted that due to the cancellation of the event, they would take me out to dinner for a one-on-one catch up. So as a result, I’ve enjoyed about five catch ups so far (last week and this week have been quite busy indeed!) and have another three to go. I can’t believe I didn’t think to do this for the previous years haha! As I’ve mentioned before, I’m very much a person who prefers experiences over material gifts – I’d rather go for a day trip, a picnic, a spa session, to a nice cafe than have jewellery and more cookbooks bestowed upon me, as generous as you are (my bookshelves are groaning already!).

One of my very good girlfriends Persian Princess suggested that she take me to Match in Roseville for my birthday dinner. I enquired if they had a website and Googled “Match Roseville” while I was at work and came up with a long list of dating websites of “find a match in Roseville” and “singles in Roseville looking for matches”. I had to quickly close the window before it came up on my IT records! So there was no website and therefore no clue as to a menu or even its location – how very mysterious.

Both of us girls were heading in from the city after work, and met at the station. So Match turned out to be the pottery shop located next to Roseville Station on the Pacific Highway (Braestone Garden Products), and while I knew they had a cafe during the day, it turns out they are now a wine and tapas bar in the evening. 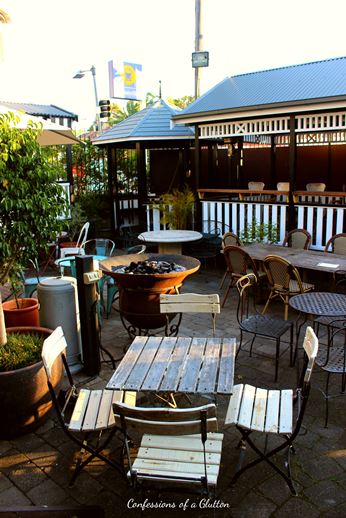 It’s an incredible space, with so many chairs placed outside. I love beer gardens and this would be the perfect spot for a chilled glass of wine and a cheese plate in the warmer months, but it was an uncharacteristically chill spring evening and so we headed inside. 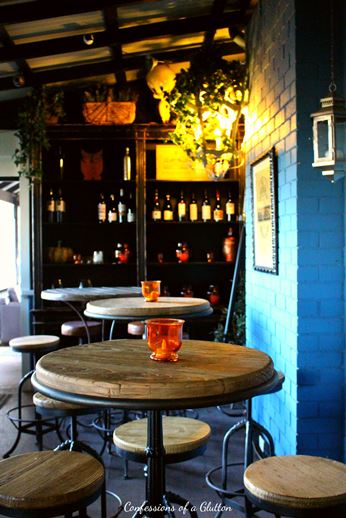 There are cabinets of antiques inside, a few tall bar tables and bar stools, and a main bar and kitchen. Soft jazz played in the background of the curiously unattended space. We headed further inside until we found a gentleman waiting tables and greeted him before sitting down and picking up the menu. 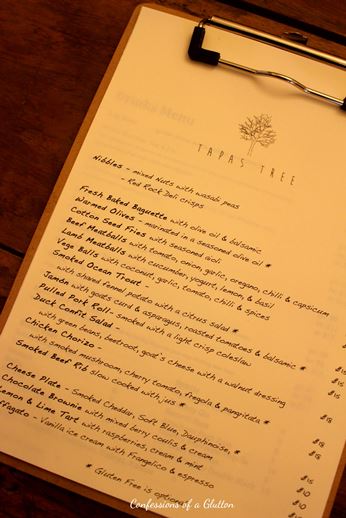 The wine list is a simple one page affair, with one of each of the standard whites and reds, some available in glasses, some in bottles only. I elected to go with the Angus the Bull Cabernet Sauvignon from the Victorian Ranges – described as evoking the essence and flavour of ripe black fruits, with rich dark chocolate and vanillin smoky oak aromas, with a medium to full body and savoury tannins. It really does help to have previously done a wine appreciation course with The Wine Society because you can understand all of the descriptions on a wine list without being too easily swayed by seductive hyperbole. 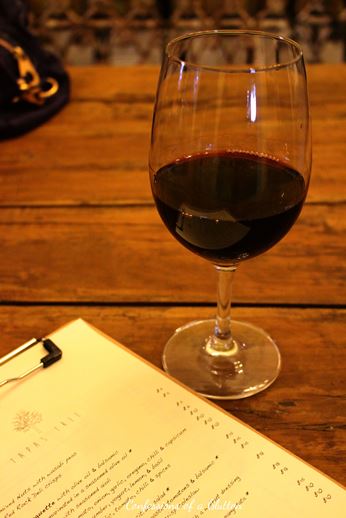 I found it quite a rich, full-bodied wine indeed, and it was noticeably savoury on the tongue after being swallowed. Definitely not one of the sweeter reds I’ve tasted, but very robust and enjoyed in small sips. The glass lasted me the couple of hours we were there.

The food took a little while to come out, and we couldn’t help but wonder if we were their first ever customers. There were one or two couples who came in and ordered glasses of wine, however we were the only ones who had ordered food. At least it means less prep has been done, so it’s probably fresher, we thought to ourselves. The hospitality of the staff was also a little questionable towards (what might have been) their first dinner guests, as after the dishes arrived, one gentleman turned down the lights just as I had my camera out. I asked if he would mind turning them back on again as I was taking photos for a blog, and he looked almost offended, which quickly made me ask if it was all right. He said it was fine. We then asked for individual plates to be met with an incredulous look. We clarified we were sharing, and he departed to the kitchen…and never returned. Slightly embarrassed, we asked the other gentleman there and he was so easygoing and eager to please, getting them for us immediately and then turning the lights back down to a romantic flicker once my photos had been taken. 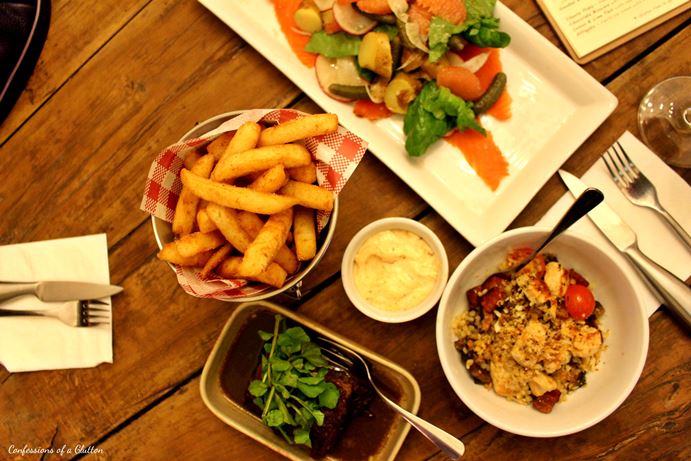 The Cotton Seed Fries with seasoned aioli ($10) had sounded like they might have a little more of a “seed” texture than ordinary fries, but we were surprised to see they looked quite ordinary. Taste-wise, they were good though, hot and nicely crispy without being too oily, and the aioli was creamy without being too much on the garlic-ky side. When we asked what made the fries “Cotton Seed”, the nicer gentleman told us that the chips were fried in cotton seed oil.

The Chicken Chorizo ($18) was one of our favourites of the evening, with smoked, beautifully tender mushrooms, cherry tomato, fregola and pangritata. Fregola is a type of pasta, similar to Israeli couscous, in little pearl-like sized spheres of semolina dough and reminds me a little of buckwheat. Pangritata on the other hand, is also called the “poor man’s Parmesan” in Southern Italy, being basically bread crumbs fried in garlic and olive oil to add texture to pasta dishes. It was a flavoursome, amazingly textural little bowl of goodness, with the barely-cooked-down cherry tomatoes bursting with juiciness and the subtle spice from the pieces of chorizo. While it was our favourite it was the only one we didn’t finish as the fregola was quite fiddly to eat with our forks. 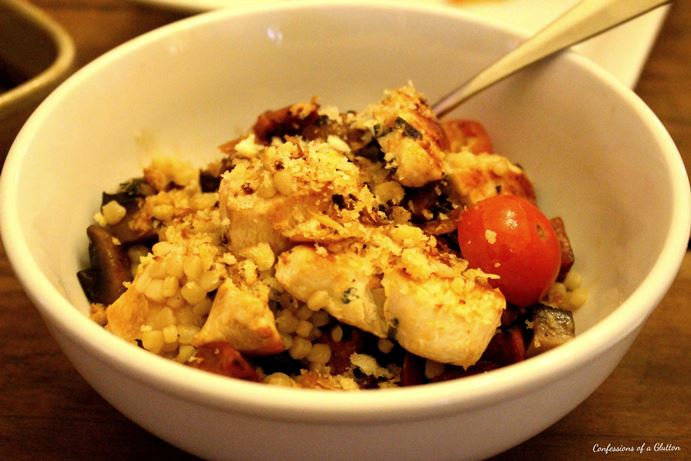 The Smoked Beef Rib ($18), slow cooked in jus, could be easily cut with a fork to be divided; that’s how meltingly tender it was. It was rich yet delicate; not gelatinous in the slightest, however I probably would not have priced it at $18. I’ve bought very cheap cuts of beef before and slow-cooked it down to achieve a similar effect in my own casserole pot from Kmart (see my recipe for Osso Bucco). 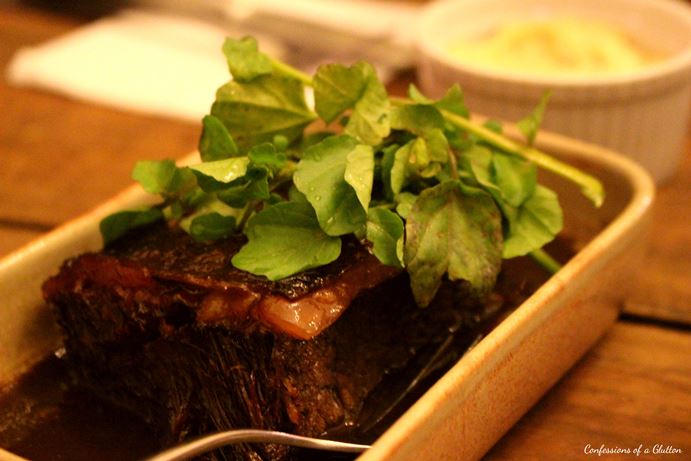 The Smoked Ocean Trout ($15) with shaved fennel, potato with a citrus salad was my addition to our order. 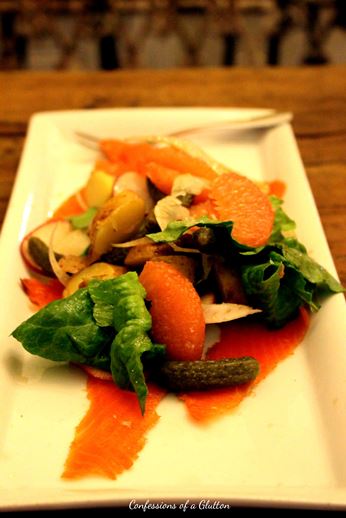 While very pretty on the plate, we found this an overly salty dish. As much as I love cornichons, they were simply too much when had with the quite salty slices of trout. The trout was better enjoyed with a little segment of grapefruit and fresh vegetable. I feel that a light lemon or citrus fruit dressing would have been quite nice and to not have the cornichons there.

The gentleman who forgot our request for plates seemed surprised when we asked for the bill at the end of our meal, and the other returned to quote a price at us without handing us a receipt, which I found rather unusual. Luckily we had a menu on hand to have a quick scan of what we had ordered. 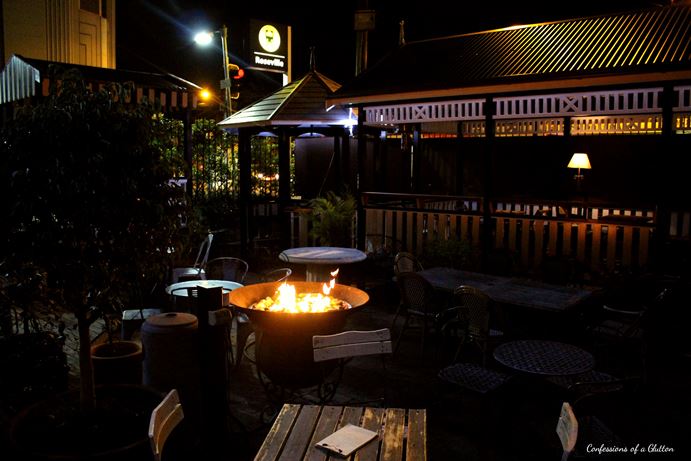 Overall, my friend and I agreed that it was a beautiful venue and would be a lovely space for hiring out the venue for a private event or something similar. While the food was well-presented and mostly had the right flavours and textures, I felt that it was a tad overpriced for what it was and there were some teething issues with the service. I don’t think I would be coming back anytime soon, but perhaps once the weather warms up I may be tempted to swing by en route back home one summer evening and have a glass of wine and see how they are coming along. 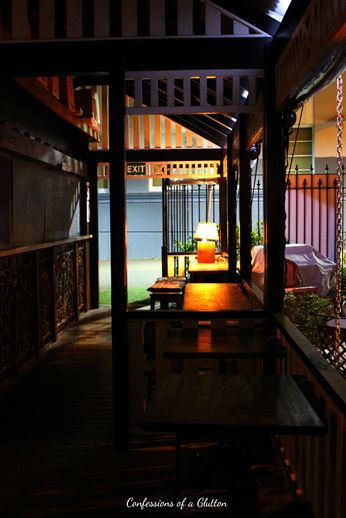