It used to be that if you wanted a drink in Sydney, you had the choice of a typical pub with fraying carpet and Toohey’s New and VB on tap, a nightclub with its characteristic sticky floor and flashing strobe lights, or a particularly high-end cocktail bar, usually attached to a posh high-end hotel. I remember that these were the choices available to me in my early university days when I first began to explore the playground that is Sydney city, and I found it severely lacking.

In a bid to keep up with our Melbournian neighbours the Liquor Amendment (Small Bars) Act 2013 (“Small Bars Act”) was passed, which meant the introduction of a new “small bars licence”: no gaming, no take away sales of liquor and a limit of 60 patrons. After this point, the small bars began to spring up everywhere, and now every small bar I know is overflowing and the waiting line spilling onto the outside pavement with eager Sydney-siders. Everyone is eager to get a taste of crafted cocktails, boutique beers and imported aged whiskys, alongside with food lists full of punchy, moreish flavours to whet your appetite.

Stitch is one of my favourite small bars. So much, in fact, that I have made a booking for my birthday evening coming up in a couple of weeks. I’ve loved it since my first visit – the completely inconspicuous entrance on the street, looking like a closed office block. You walk in to the ‘foyer’ with the wall of old school sewing machines and push open the swinging wooden doors to reveal a flight of stairs that go underground to the bar, lit with flickering candlelight and dim antique fittings. It’s all very Prohibition-era decor mixed in with the sewing theme (the name of the bar is “Stitch” after all…), and some of the small intimate tables for two are actually sewing tables – foot pedal included.

The private room was occupied at the time of my visit, so I didn’t want to flash my camera around. It’s a opulently-furnished red room with a wide lounge and mirrors on the ceiling… I’ll leave that visualisation to your wild imaginations… 😉 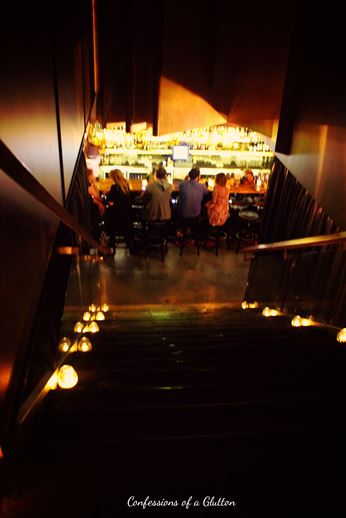 The wait staff are friendly and the bar staff know their craft. Most evenings Stitch is fairly flat out, particularly near the end of the week, but the barmen will usually find the time to chat a little if you take a high stool and lean your elbows against the main bar. If I were to ever join the hospitality industry, my first choice of job would be of course as a pastry chef, but my second choice would be a bartender. There’s something so erotically mesmerising about seeing the twirl of muddling sticks between light fingers, the icy frost instantly smoothly form along the side of the cocktail shaker on the first raise, the multi-coloured glass bottles being inverted and spun to concoct a balance of flavours that equally linger on your palate as much as they can make you light-headed with delight.

Take a seat in one of the roomy leather booths if you can and you’re brought one of my favourite cocktail lists in Sydney. 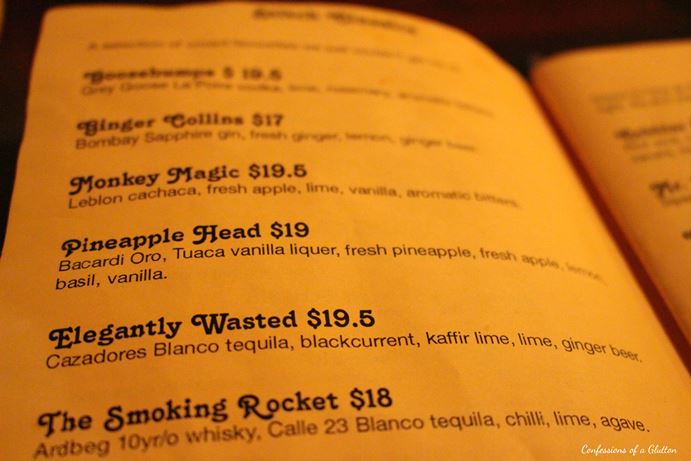 I was here this evening with my dear friend Persian Princess, for her to regale me of her recent visit to the continent of the United States. I’m yet to visit any part America myself, and so her descriptions of Las Vegas, In-Out-Burger, New York and small things like tipping and dining out held me in thrall for the majority of the evening. But we had just finished a hard day of work after all, and so of course drinks to moisten our lips between our chatter and food to combat hunger pangs was required. We ordered a cocktail each. I went with my favourite brand of gin, going for the Ginger Collins ($17): Bombay Sapphire stirred with lemon, freshly pressed ginger, then topped with ginger beer. Refreshing with a fiery kick of nasal-clearing ginger root. Persian Princess chose the Pineapple Head ($19): fresh basil leaves muddled with pineapple, with a healthy dose of Bacardi gold and Tuaca. Balanced with freshly pressed lime and a squeeze of apple juice, served tall and beautiful with slices of freshly cut pineapple.

I’ve only ever come here for drinks, and I’ve always been eager to try the food. The food menu is one of the more extensive ones I’ve seen for a small bar this side of the city, ranging from burgers to hot dogs, soft tacos, small sharing plates, salads and desserts. I’ve been eyeing up the Mack Ducky Dog ($19) forever: duck, orange and pistachio sausage, foie gras de canard and truffle sauce. All hot dogs and burgers come with Stitch’s signature curly fries.

The hot dog sausage was meaty, substantial and yet lighter in flavour than I had been expecting – but it allowed me to particularly savour the earthiness of the foie gras and the heady whiff of truffle. The bun was an ordinary bread bun; nothing extravagantly rich like a brioche, so it goes down easily. The curly fries are moreish and well-salted, also seasoned with a generous amount of pepper. While the larger fries you can pick up between two fingers delicately, the shorter fries do get quite fiddly and you end up spearing a bunch at a time with your fork to devour the rest of them.

My friend had the The French Poodle ($17), with a Toulouse style (a French, coarsely-minced meat) sausage with red wine and garlic, Tarago River Gippsland brie, pickled pear and dijon mustard. They don’t look too different due to the lighting, but she was equally as happy with her hot dog. 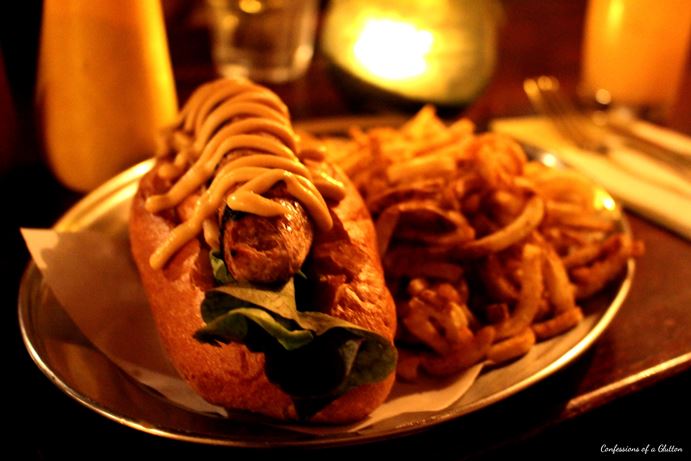 I could just squeeze in dessert but she declined. I had had my eye on the Raspberry and Caramel Checkerboard Waffles ($12), and the menu said they came with a pear and rhubarb crumble ice cream.

The waffle was deliciously crunchy and aromatic in that freshly-baked biscuit way it tends to have – sweetened with the caramel and raspberry sauces drizzled onto the platter. I was little dismayed though as the accompanying ice cream was just plain vanilla, rather than the pear and rhubarb crumble ice cream as promised on the menu. I wasn’t quite sure where it was, but I didn’t taste any pear anywhere on the plate. It was a lovely dessert for what it was, but didn’t work up to its promise.

You really only get the charm of this place when it’s less-crowded. I would recommend visiting on a weekday evening or earlier on in the evening as it can get very packed and very loud. Food is served throughout the night, so should you drop by near the end of a night out, you know what they will have here.