I’m still adjusting to having so much time to myself. After working part-time, studying full-time, maintaining a blog and hitting up the gym four times a week for a period of six years, it’s a little hard to get out of the habit of knowing you have something to do or catch up on in any waking moment.

Now, work finishes at 5. I go to the gym or go home and cook. Watch some television then sleep. Weekends are filled with endless possibilities. This will be the first summer in fact, that I have zero study commitments and I’m almost panting with excitement at the prospect of balmy long weekends spent at my favourite beaches.

But before I go to the drawer to take out my bikini to see if it still covers the appropriate areas, I may as well take advantage of being able to cover up a little bit longer and indulge a bit on the weekends 😉 These gorgeous, spiced Cinnamon Pancakes served with Whipped Maple Butter and Candied Walnuts are a perfect indulgence on a lazy Sunday. They look complex but are really not that hard, with most of the ingredients being staples in your pantry if you’re a somewhat regular baker (other than the walnuts). This recipe comes from Gourmet Traveller – one of my recent favourite websites to browse for new recipes as I’ve found the dishes I try from the site are not only full of flavour but look impressive too when plated well. Who’s so fancy now? 😉

And yes, we already knew the answer to that one. 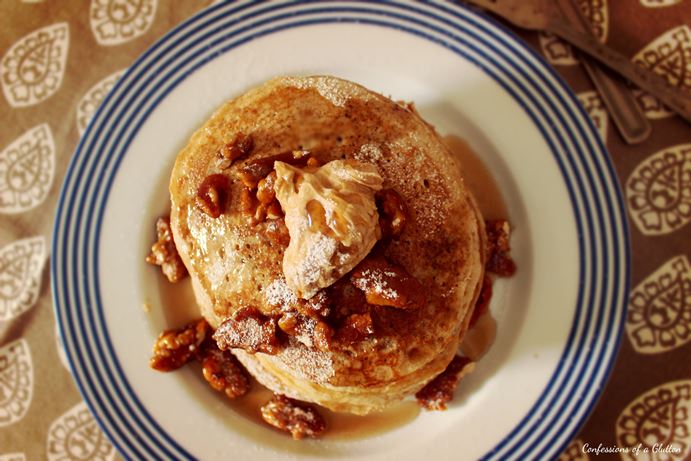 The walnuts can be candied ahead of time and stored in an air-tight container.

To make about 12 fluffy pancakes, you will need:

Whipped maple butter (I’ve reduced the original recipe for the maple butter in half, as 200g butter seemed rather scary. This should be more than enough)

For the candied walnuts, preheat the oven to 180 degrees Celcius. Roast the walnuts on an oven tray until golden (3-5 minutes). Meanwhile, bring the sugar and 80ml water to a simmer in a small saucepan over medium heat and stir until the sugar dissolves. Brush down the sides of the pan with a wet pastry brush to remove any sugar particles. Increase the heat to high and cook until caramel (about 5-10 minutes).

Add the walnuts, stir to coat, and then transfer to an oiled tray and set aside to cool (10-15 minutes). 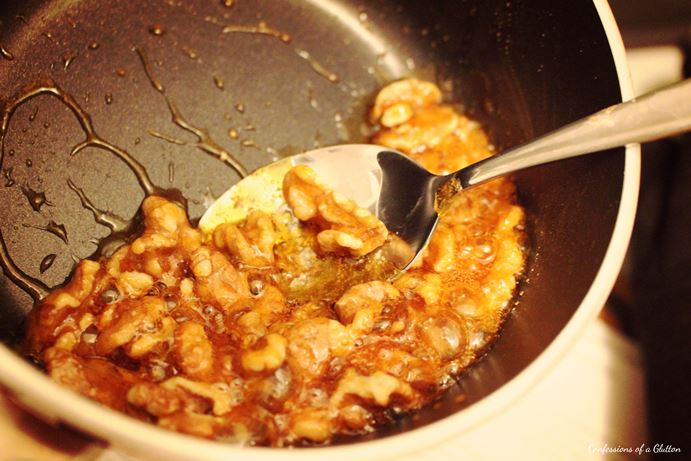 For the whipped maple butter, beat the butter in an electric mixer until light and fluffy, then gradually add the maple syrup, beating well. Stir through the cinnamon. Dollop spoonfuls onto a tray/plate lined with baking paper and refrigerate. 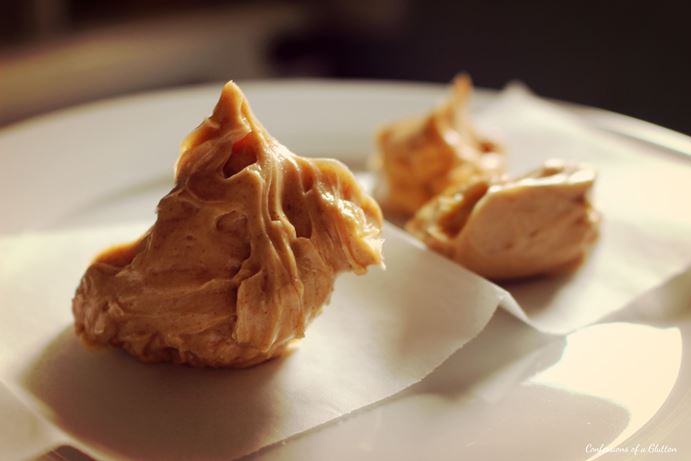 Reduce to oven to 160 degrees Celcius. Whisk the milk, sugar, yolks, cinnamon and a large pinch of salt in a large bowl to combine. 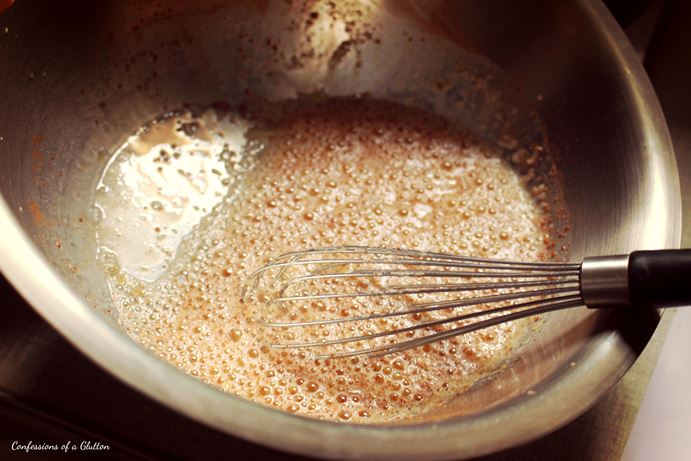 Whisk in the melted butter, then sieve over the flour and fold in until just combined. Whisk the egg whites with cream of tartar in a separate large bowl until firm peaks form, then fold into the mixture.

Melt about half a teaspoon of butter in a 12cm-diameter non-stick frying pan over low heat, add a ladleful of batter and cook until bubbles appear and the pancake begins to puff (about 2-3 minutes).

Turn and cook until the pancake is cooked through and lightly golden (2-3 minutes), transfer to an oven tray lined with baking paper and keep warm in the oven. Wipe the pan clean with a paper towel and repeat the process until the butter and batter are used. If you’re not too pedantic about your pancakes you can skip the wiping, but it means your pancakes won’t collect little burnt black speckled residue of the pancakes that were cooked earlier. 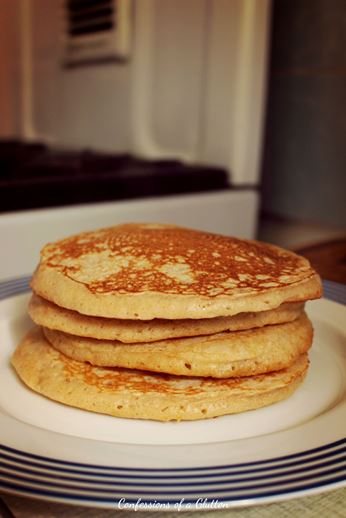 Serve warm topped with the maple butter, candied walnuts and a dusting of icing sugar, with extra maple syrup. 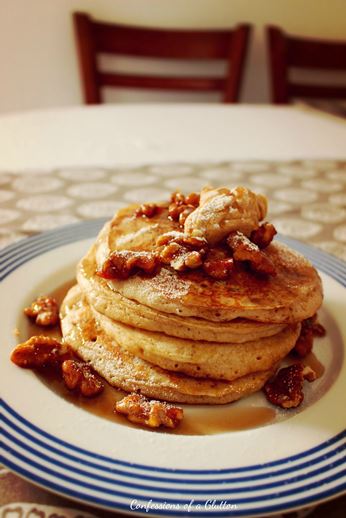