I don’t think I’ve ever been this eager to have a four-day long weekend. On top of my regular work-play-gym-sleep-repeat routine, The Sister has requested that I make her wedding cake for the big event next month, which of course I was more than delighted to say yes to. Little did I know that this was more easily said than done, and over the past week I’ve been looking at right size cake tins for a two-tiered cake, how to split cakes evenly, how to insert support dowels into a layered cake, how I’m going to be transporting the cake, what box I’m going to be transporting the cake in, what base will the cake sit on, if freezing the cake will have any benefit whatsoever, and most importantly – what kind of cake I’m going to make. While my Baby Carrot Cake recipe has had the best feedback, it is quite a fiddly cake. Right at this moment, as I’m typing this in my bedroom, behind me on the bed I have no less than six cookbooks laid out, as I search for a nut-free chocolate cake recipe that will be perfect.

In terms of other wedding preparations though, the invitations have all been folded and sent out, musician found, dress ordered, and now we are in the process of the makeup trial. A couple of weeks ago, I accompanied The Sister to a makeup artist in Neutral Bay. I was there for not only my bridesmaid duties, but also to take photos with my SLR to determine how the makeup would come up in the photographs. For those who haven’t had a photoshoot or are not familiar with the effect of the camera on makeup – the camera will always take half of your makeup away. Hence the reason why makeup artists will pile on the base, foundation, smoky eye and false eyelashes; you will jump when you see yourself in the mirror, but then when you look at the photographs afterwards, you understand their reasoning.

After the makeup trial, The Sister called up her fiance, and we three decided to have lunch in the Neutral Bay locality. There are so many restaurants to choose from around there, but they decided to show me Tamageta-Ya, a tiny hole-in-the-wall Japanese restaurant that’s easy to miss (despite all of the bannering out the front), and the sister restaurant to the popular Sushi Samurai chain.

Seating is booth benches that seat a maximum of four along the right wall of the small restaurant, with the left being the cashier and the kitchen. There’s further seating outside at the back in a small courtyard, which would be quite nice for alfresco dining during warm weather. The inside of the restaurant is panelled with warm shades of wood and tile, with fake (but not tacky) vine foliage undulating out of the pots secured high up on the walls. There are also flyers and pictures of the menu specials on the walls beside the booths, with an electronic screen displaying the Sushi Buffet “Deluxe” and “Superior” menus available only during dinner. I was a little confused about the electronic screen thing, thinking that it was an ordering screen, and pressed it to no effect other than to make my sister laugh. It took a while for us to place our order, as there only seemed to be one waitress for the entire restaurant during that lunch shift, and the poor girl was running up and down the narrow walk. 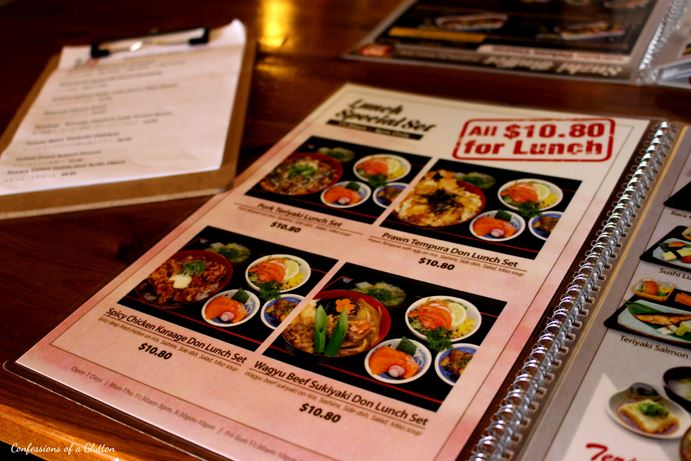 Our food arrived relatively quickly and almost all at the same time. The prawn tempura don set had a bit of everything – the prawn tempura don of course, consisting of two lightly battered tempura prawns, topped with scrambled egg and sitting on a bowl of fragrant rice, miso soup, salad, a piece of agedashi tofu, two pieces of salmon sashimi, and a little bowl of pickled vegetables. 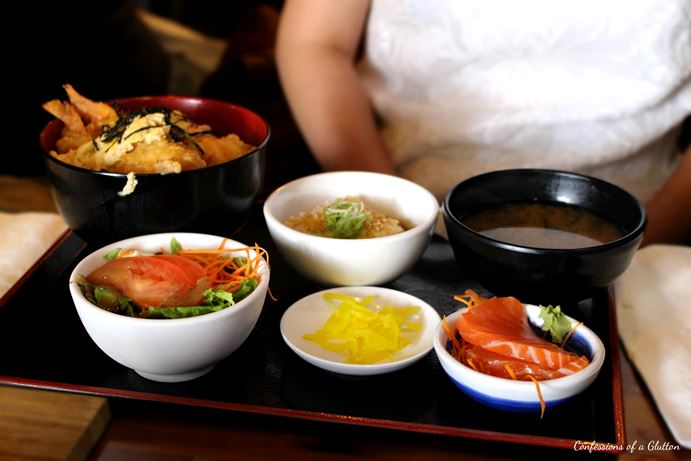 An excellent amount of food for $10.80. I had ordered the Tokyo Udon ($8.80), and the Sister told me it was quite plain, so to order a topping with it. I went with a topping of Chicken Katsu ($3.90). Other toppings were karaage chicken or prawn tempura. 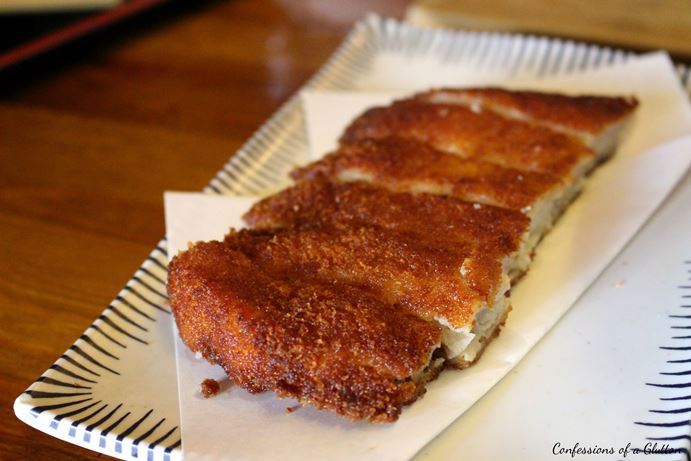 The Tokyo udon was a very plain, soy-sauce chicken based soup, but very soothing and clean-tasting. It came with a piece of sweet bean curd, seafood stick, and fish cake. I’ve never understood why the Asian fish cakes are stamped with hot pink colouring – it really looks quite lurid! The chicken katsu was a piece of lean chicken breast, lightly crumbed and deep-fried so that the chicken still retained a lot of its tenderness.

The Sister and her fiance had specifically chosen this restaurant as they had a ramen dish we haven’t seen at any other Japanese restaurant, being a pork-based soup with ramen noodles, traditional ramen toppings, and a few slices of lemon. I unfortunately can’t remember the name of the dish and nor did it turn out on my photos of the menu, but I do remember it being priced at $10.80.

It was a highly unusual broth, and while the addition of lemon lightened the thick soup considerably, I wasn’t very accustomed to the flavour. The pork belly was quite lean, and the ramen was garnished with a few leaves of bok choi, pickled bamboo shoots, a sheet of nori and a scatter of finely chopped spring onions.

As I was also craving fresh sashimi, we had ordered the Salmon Sashimi ($14.80), which came out as nine pieces of glistening salmon, beautifully laid out in a fan, accompanied with slices of lemon and freshly ground wasabi paste.

The sashimi was perfectly silky, flavoursome and fresh. It’s difficult to believe that not so long ago I could hardly bear to look at sashimi, and yet now I’m scoffing it down with merely a dip of soy sauce. So good.

Tamageta-ya has a lovely variety of dishes and it’s decor and small interior is cosy and traditional, if the larger and flashier Sushi Samurai restaurants are not quite your thing. Dishes are very reasonably priced, especially with the set meal deals available during lunch time. With its good quality, authentic Japanese cuisine, I’ll be sure to keep this place in mind when I next return to the Neutral Bay area.