Sushi e is located on Level 3 of the Establishment Hotel; one of the city’s most notable Merivale venues in the middle of the Sydney CBD. Upon arriving at Level 4, I was slightly surprised to see that it was right in the corner of Hemmesphere, which occupied most of the floor. It was a tiny sushi bar, lit by a generous amount of white natural light from the third-floor windows, and opening out to the Hemmesphere bar. It was furnished with a raised dining bench and stools which allowed you to observe the sushi masters at work, and small simple sets of short tables and chairs.

With the tiny size of the sushi bar, it’s essential that you make a reservation. As this was in the middle of the March into Merivale 2014 month, I had already made one mid-week to sample their wares for the special $33 meal deal menu. As myself and my lunch companion were fairly ravenous, we decided to order a sushi roll of the a la carte menu as well, in order to sate our hunger.

My companion had the Villa Maria sauvignon blanc, a fairly dry white that went well with his later sushi selection, while I opted for the pinot noir. It was full and flavoursome, quite heady to the level that I was a mite light-headed when I returned to work after lunch! With our wines arrived the miso soup – included in the March deal – with nicely spongy slices of bean curd. 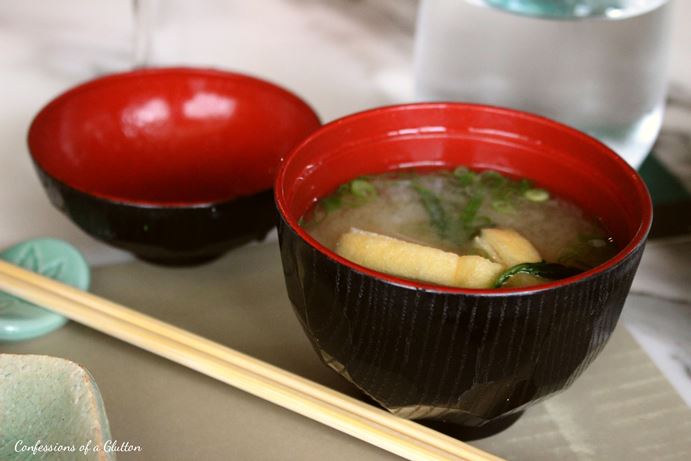 The sushi roll we had ordered off the regular menu was the Atlantic Roll ($23.50): Salmon, cucumber and chives, all rolled inside-out, then smothered with juicy salmon, salmon roe and mayo. The roll is then flame-seared.

I dearly love flame-seared aburi salmon, and this was no exception. I particularly enjoyed the savoury pop of the salmon roe on my tongue; nothing quite compares to its fresh flavour.

The Sushi Platter on the $33 meal deal menu consists of four pieces of tuna and avocado roll and six pieces of nigiri – tuna, salmon, ocean trout, scallop, snapper and prawn.

I was permitted to sample one of the tuna and avocado maki rolls, and I almost rolled my eyes at how deliciously fresh the tuna was. The best word to describe the fish would be smooth – in both texture and flavour.

I was a little dismayed when my Japanese-style wagyu hamburger steak, daikon ponzu, shiitake mushroom, Asian greens arrived. First of all, when did broccolini count as an Asian green?

Originally I had been a little hesitant about the hamburger steak – I would have loved a wagyu steak, but a hamburger mince patty sans a bun seems rather strange to me. The waitress convinced me otherwise, but as soon as this arrived I kind of wished I had selected the third option. It was essentially a mince patty, flavoured with what tasted like mere soy sauce and vinegar – with grated daikon radish on top of the steak. Probably only the good thing about it (other than the shiitake mushrooms) was that it went well with my red wine, being red meat….

Considering how crowded the little bar got over the course of lunch, I was not too disheartened by the meal – I just selected the wrong thing this time round. I’ll be back to sample more of the sushi on the regular menu.