According to the wise words of Wikipedia, Errol Leslie Thomson Flynn was an Australian actor, known for his romantic swashbuckler-style roles in Hollywood films and his playboy lifestyle. In 1935 he was married to French-born actress Lili Damita (who was one very stunningly gorgeous lady; look her up if you have the time), before they had one son, Sean Flynn, in 1941. Sean became a freelance photo journalist under contract to Time magazine, when he and a fellow journalist then unfortunately dropped off the radar, reported missing in Cambodia when taking photographs of the Vietnam War.

Now I’m not really sure if it’s pure luck that The Flynn has a restaurant called Lil’ Damita which serves French-Vietnamese inspired food or whether my internet research/trawling has in fact unveiled a scary coincidence. In any case, let’s dispense with the history lesson and get on with what I’m sure you’re all here for: the food. 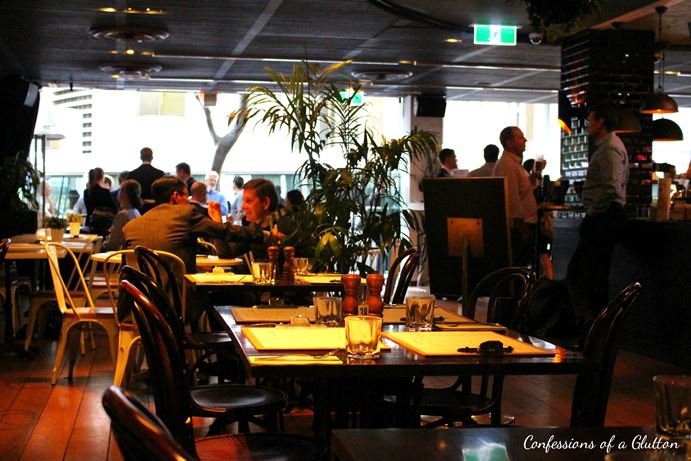 The Flynn, previously dubbed The Bligh on Bligh Street, has had a new facelift, seeking to evoke a 1940’s “bad boy” feel that Errol Flynn himself would have emanated. There’s a bar at the front street-facing half of the venue, where it was spilling out onto the street with suits from the nearby offices. With $5 beer, wine and champagne, $12 jugs of beer and $10 hand-made cocktails every Monday to Friday from 5-7pm, it’s not hard to see where the appeal lies. I wasn’t here for a mere drink though, but to sample the new menu of the restaurant, Lil’ Damita. 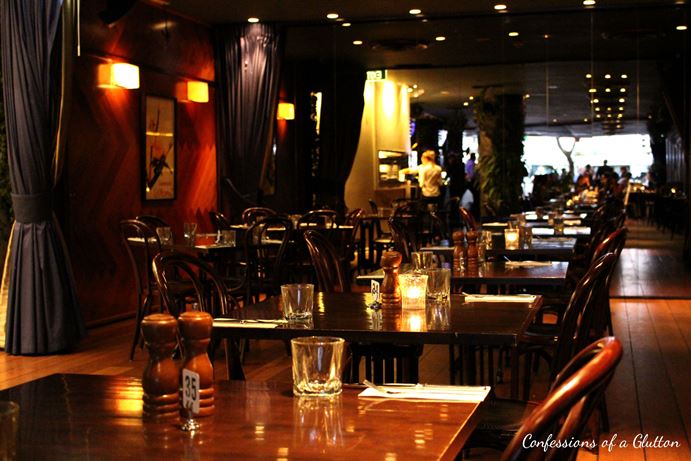 As the restaurant was further back into the establishment from the front sports bar, unfortunately some of the cigarette smoke from smokers outside wafted into the restaurant-area, but it was a particularly windy night and it couldn’t really be helped.

It was a Thursday early evening and I had brought along my good friend Persian Princess, so to better sample the menu and also, of course, for her excellent company. We started with a drink each: a Strawberry Fizz for her, being a refreshing non-alcoholic combination of sparkling water and muddled strawberries with mint, and a classic Mojito for me. 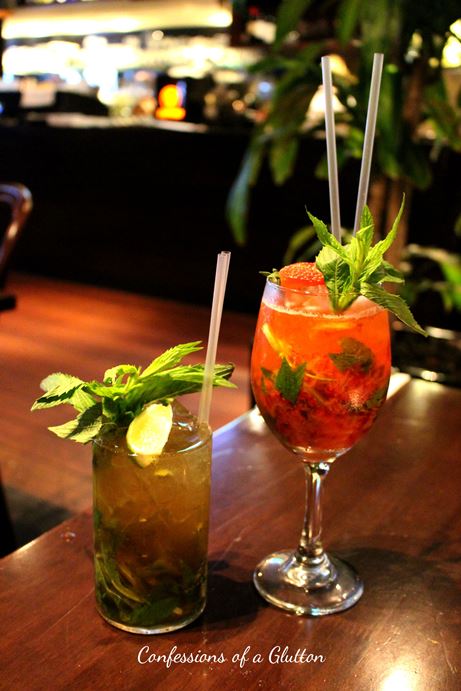 I probably would have preferred a bit more of a ‘kick’ with my drink – not so much in the sense of having more alcohol, but it was a little on the overly-sweet side and I would have liked more lime and the soda tasted a little flat. Nonetheless, it was almost the end of the work week and a good drink was very much appreciated!

I elected to start the meal with two share plates, the first being the Zucchini Blossoms ($14): tempura zucchini flowers stuffed with Gorgonzola, ricotta and Parmesan.

The blossoms were perfectly battered and deliciously crisp, making a satisfying audible ‘crunch’ when you bit into them. The batter isn’t the only key to an excellent tempura zucchini flower however, and I also found the mixture of Gorgonzola, ricotta and Parmesan a beautifully creamy and flavoursome combination that wasn’t too salty.

I had been craving a good Beef Carpaccio ($16), and Lil’ Damita’s version came with capers, truffle oil, aioli and rocket.

The beautiful waft of truffle oil hit us as soon as the plate was placed at our table. My friend has never had beef carpaccio before, and she was astounded at how thinly it was sliced. The meat was tender and fresh, with a nice peppery crunch from the rocket. It was a delicious, light little share dish.

For main, I selected the Fish ($25): a fillet of Hiramasa kingfish, with carrot and ginger puree, spinach, seed mustard dressing and apple salad. 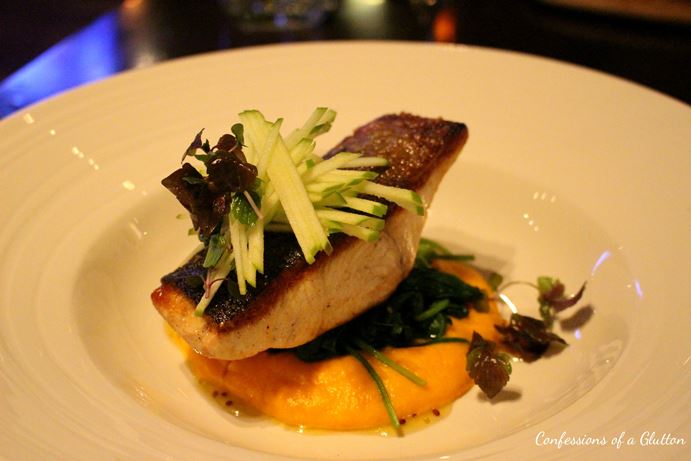 I’ve only ever had kingfish as sashimi before so having it as a cooked fillet was a new experience. It was quite a meaty fillet, almost like the consistency of salmon, but had a very delicate natural flavour. The skin was nice and crispy, and with the puree and apple salad, it was overall a nicely balanced restaurant-quality light dish.

We had also selected one of the artisan pizzas, the Funghi ($17), with mushrooms, shaved ham, brie and salsa verde.

The base with thin but not overly so, with nicely charred edges. Melted brie is one of my favourites, as it has such a light texture like a mozzarella yet with still such a distinct flavour. The salsa verde was quite strong with the basil and garlic, so the flavour would probably have been better distributed by being spread over the pizza in a light layer rather than having it in quite distinct stripes.

My friend was straining slightly, but agreed on dessert. She couldn’t eat much more, but I made her order the Affogato ($9), which came with vanilla ice cream, pistachio biscotti and Frangelico. 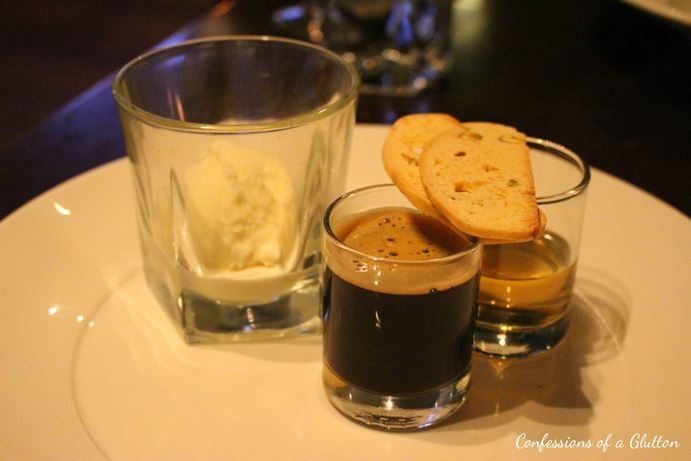 The shot of espresso was strong, rich, and flavoursome: one of the best espressos I’ve ever tasted. I’m not certain if The Flynn serves coffee during the day, but if they did I most definitely would drop by during a break from work for my daily fix. The biscotti was crisp but not overly so, and perfect when dipped into the espresso-ice-cream-Frangelico combination.

Meanwhile, I was fixated on my Sticky date ($9), with poached rhubarb, butterscotch sauce and vanilla ice cream.

I had asked the waiter what he would recommend out of the desserts and he suggested the sticky date, adding that they had had a group booking the week before where the whole party had ordered sticky date puddings as their ‘birthday cake’. I don’t often go for the sticky date pud when I eat out, preferring to test the kitchen’s skills on a more technical dish, but I sure was happy when this arrived. Fluffy, gooey, moreish and…. who needs words when you can just keep eating? Any excess sweetness from the butterscotch sauce was counterbalanced with the tartness of the softly poached rhubarb.

Overall, The Flynn’s Lil’ Damita has a very well-executed menu to suit any palate, ranging from more resturant-style dishes to artisan pizzas. The two share plates were both winners, as was the sticky date pudding. I’m already considering a return visit just for dessert…