The Sister and I have very different tastes when it comes to movies: I like my action, drama and comedy movies, while she’s very much into her romantic comedies, international cinema and documentaries. During the Boxing Day sales I bought the DVD of The Hunger Games and insisted she watch it with me over dinner that evening, convincing her that it was not half as gory or violent as Lord of the Rings: The Two Towers (a movie which has scarred her for life).

To her surprise, she greatly enjoyed it and I was pleased that she had.

The next day, I had a brunch catch-up with a friend who is now working in Canberra, and when it finished I was surprised to see a missed call from her on my phone. When I called her back, I discovered that she had been stung numerous times by a wasp in her garden at home. She had called emergency services and a nurse had talked to her over the phone about what to do and to calm her down. Thankfully, she was more than fine, but incredibly annoyed that I had made her watch The Hunger Games the night before… the reason being that about halfway through the movie, a number of contestants die from being stung by a nest of “tracker jacker” wasps! The memory of that scene made her panic soar through the roof as soon as she was stung, but to our great relief all she sustained was a little pain and swelling which has since gone down.

I had watched the sequel to The Hunger Games in early December, being Catching Fire, with my friend Brother Bear after work one Tuesday night, and after the movie we were stumped for dinner options around the Town Hall area. He decided to show me a restaurant down on Pitt Street, around the “Little Korea” area between Town Hall station and World Square.

Sydney Madang was a two floor establishment that was relatively quiet for a weekday evening. We were sent upstairs by the ground waitstaff, and the upstairs waitstaff were about to send us back down until we told them we had been sent to be seated upstairs. We sat out on the balcony as it was a warm night, where many of the tables outside were for barbecuing. The weather was a bit too warm for a barbecue, so we scanned through the menu for some other options instead. I was a little alarmed to see little chillies on the menu depicting heat levels; not something I’ve ever seen outside menus for Thai restaurants. Brother Bear is Korean himself, so for the first time I was relying heavily on him for selecting dinner as the only thing I recognised from the menu was bibimbap!

Once we made our order, of course we were served with the little complimentary side dishes that are always present in Korean restaurants: seaweed salad, potatoes braised in soy, dried radish, and a bit of kimchi…of course!

I have never heard of Mul Neng Myun ($13), or noodles in icy cold beef soup served with sliced beef and egg. 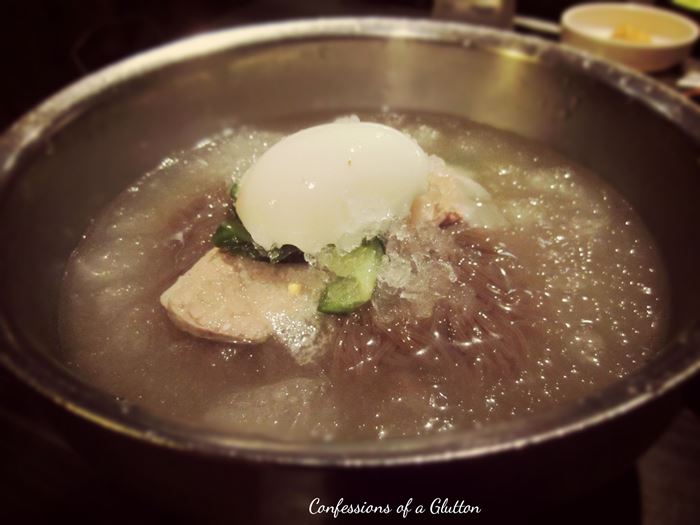 My mother makes something similar to this using pork bones for the broth, but I’ve never ever in my life had soup cold, let alone with ice cold noodles, and it was a rather surreal experience. Once you got over the strangeness of it however, the soup was well-seasoned and flavoursome, but there’s also white vinegar and other condiments available should it not be sufficient for your tastes.

Our other dish was one I’ve heard of before but never tried, the Bo Ssam ($30 for small), which was pieces of specially boiled pork with fresh vegetables with a spicy oyster and pickled radish Kimchi. 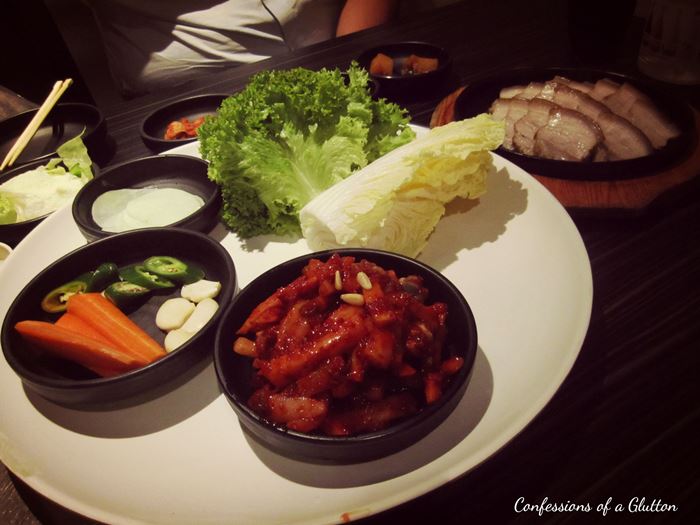 What you would do is take a lettuce or cabbage leaf, add a slice of pork belly, and then add the side condiments as the pork belly on its own is quite plain. It’s almost like the Korean version of a Chinese san choy bao, with the melt-in-the-mouth goodness of the fatty pork. I was a little alarmed to see raw garlic cloves at the ready as part of the condiments, but overlooked it in favour of the thick, miso-like sauce that accompanied the dish.

It was certainly one of the more different meals I’ve had, but from what I’ve heard, the food was as authentic as you can get. It was surprisingly reasonably priced for its central location, and I may pay them another visit to try their barbecue…and make sure I’m wearing disposable clothes 🙂 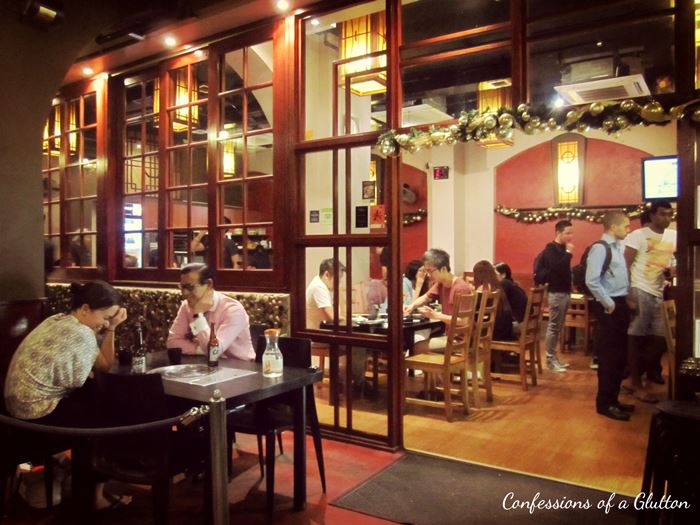