Barrafina Tapas is located in a rather quiet corner of the Sydney CBD, situated on Bligh Street and surrounded by corporate office buildings. It was therefore no surprise to see predominantly businessmen and women at the establishment, spilling out into the outdoor dining area on the street as they chatted and mingled with a glass of wine or fragrant sangria to wind down the working day.

I’ve had mostly good experiences with tapas throughout my dining history. While the size of the dishes are usually somewhat lacking, they never fail in their ability to leave you speechless with an explosion of flavour and textures. I was here tonight with a few select work friends in tow to see if Barrafina would live up to this standard.

The interior is sparsely furnished and moodily lit with tea candles at each table. I had one look at the menu and immediately felt out of my depth with the large amount of Spanish ingredients on it, and so asked our waitress for some help. To cut a long story short, everything sounded amazing when it was described with a genuine Spanish accent, and I said it was probably best if she help us select a range of what Barrafina thought were their signature dishes. She happily agreed, and I was more than happy to be alleviated the embarrassment of  reading out Spanish dishes in a terrible accent.

But in the meantime, a drink while we’re waiting? We each had a glass of the Red Wine Sangria ($13), which was a deliciously refreshing combination of Rioja Tempranillo, Grand Marnier, Hennesy, Peach Schnapps and full of summer fruit like nectarine, oranges and strawberries.

Our tapas were fast to arrive at our table. The four of us started with the Jamon iberico de bellota pura, aged 30 months ($22):

I love my cured meats and this jamon was no exception. Tender, subtly spicy, not too salty and the fat perfectly melt-in-the mouth, it was ideal paired with a bit of crusty bread.

The Crisp zucchini flowers, salt cod mayo ($11), were very lightly battered. I haven’t ever had zucchini flowers that weren’t stuffed with something or another, but I found that having them non-stuffed made them taste and feel significantly lighter on the palate. The creaminess of the salt cod mayo served to cut through the slight residual oiliness from the flowers. 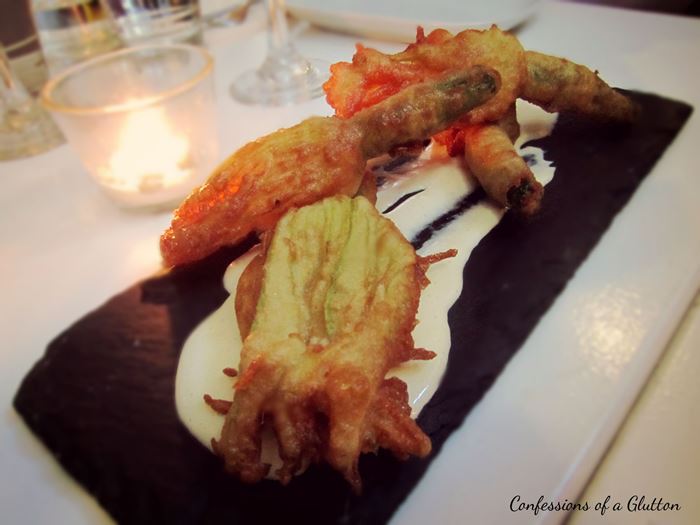 We had been told that the Soft shell crab slider, avocado mousse, harissa mayo ($9) was one of the most popular items on the menu, and when it arrived we could certainly see why.

There was a moment of complete silence around the table when we each chowed down into our slider. The crab had just the right amount of crunch and meatiness, and with the refreshing addition of salad and a subtle kick from the harissa mayo, it was one of the best ways I have ever put soft shell crab in my mouth.

The quality and the freshness of the tuna beat many sashimis I’ve had hands down. We were impressed by the silkiness of the tuna and the purely original combination of flavours and textures, and were very sorry when we gobbled it all down.

The Yamba king prawns, ajo blanco, jamon, almonds, micro herbs ($22) were meaty and tender. It was another original combination as I never would have thought that almonds would pair well with prawns, but there you go. It was also my first taste of “ajo blanco”: a Spanish cold soup traditionally made of bread, crushed almonds, garlic, water, olive oil, and salt; but in this dish, made into a thicker puree to accompany the prawns. 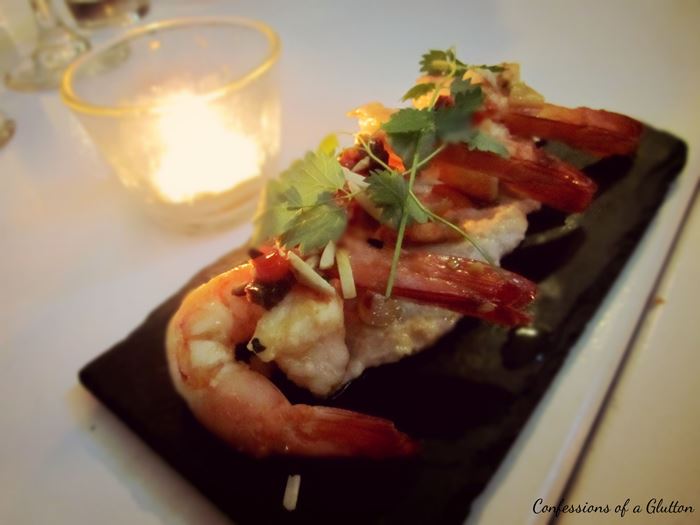 And to finish our savoury tapas, what better than All day braised lamb ribs, membrillo, rosemary, sherry vinegar ($23):

One at the table was not a lamb eater but admitted that it tasted good and had not just one, but two ribs. The rest of us devoured our share, with the meat shredding off the bone with ease and gorgeously glazed with the sweet membrillo (a Spanish paste made of quince) and sherry.

The night must always end with a sweet though. Unfortunately they were sold out of the churros, but we sampled the other two desserts on the menu, being the Caramel flan, summer fruits ($9) and the Spanish chocolate fondant, hazelnut gelato ($9): 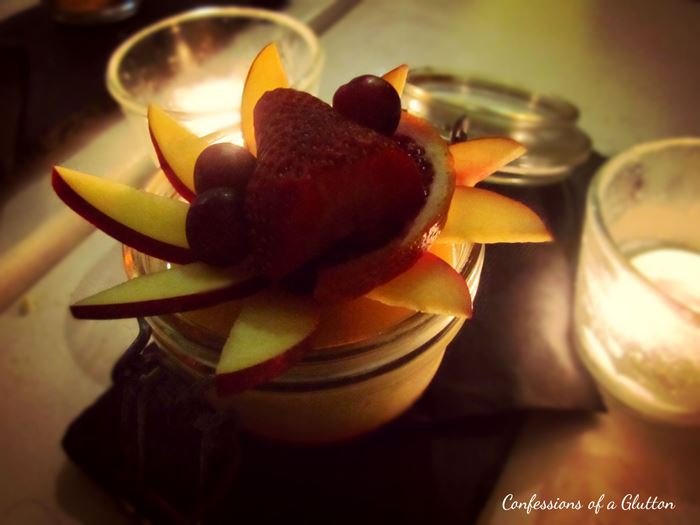 The caramel flan came beautifully arranged, in its own cute little jar. The flan was quite sweet and the texture of the custard a little harder than I’ve had before, but still very tasty. However I was more besotted with the Spanish chocolate fondant, which was sinfully rich and dark, oozy and warm in the middle. 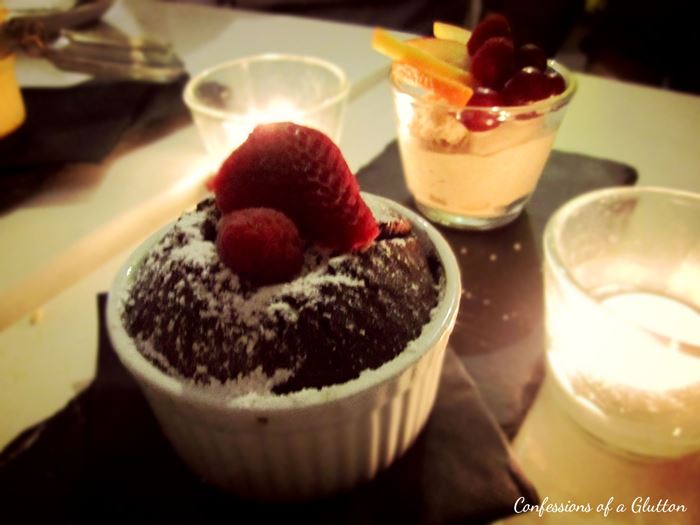 A flavoursome and beautiful tapas dinner without the price tag. It was an amazing dining experience to have not only fresh and vibrant ingredients, genuine Spanish produce, but also  friendly and authentic Spanish waitstaff. I can’t imagine anything better after a long day at work than a drink of that sangria with a slider and a plate of the jamon, sitting in the warm Sydney summer dusk. Bliss!