This has to be one of the best wine bars I have found on my side of the bridge, that can be compared to the likes of the hidden bars of Surry Hills and tucked around various parts of the suburbs surrounding the Sydney CBD. I had previously visited The Botanist one Friday evening after work, but it was far too dark for me to properly photograph the food. The only photograph I had managed to snap for the night was of my cocktail, the Le Bulleit Bleu ($18): Blueberry infused Bulleit bourbon with peach liqueur, a dash of organe bitters, spiced vanilla & blueberry syrup and a splash of lemon juice. 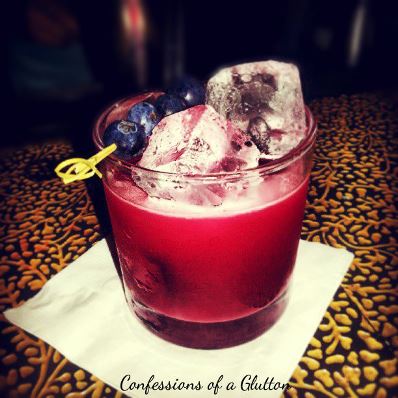 It was delicious, just like the food that we ordered, which was why when Kulinary Adventures of Kath suggested lunch to finalise our plans for the Bake Sale, I suggested a visit of this place during the day, as the menu was the same and I could get better photographs.

The Botanist is not a five minute walk from Milson’s Point Station, and located on the Kirribilli (aka, opposite the Luna Park side) side of the station. It’s not too hard to look for during the day. 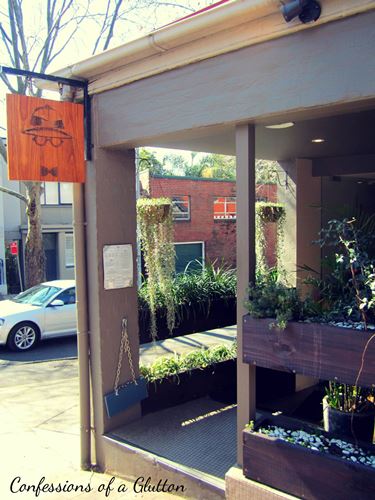 The windows let in a generous amount of natural daylight into the bar, with the bar floor full of high tables and seats, various pots of pretty green foliage and a few colourful flowers in vases on the shared tables. We were seated in a cosy small high table in the corner which allowed us a good view across the floor. We later discovered that our bar table was too small for our purposes, with the sheer amount of food that we had ordered. 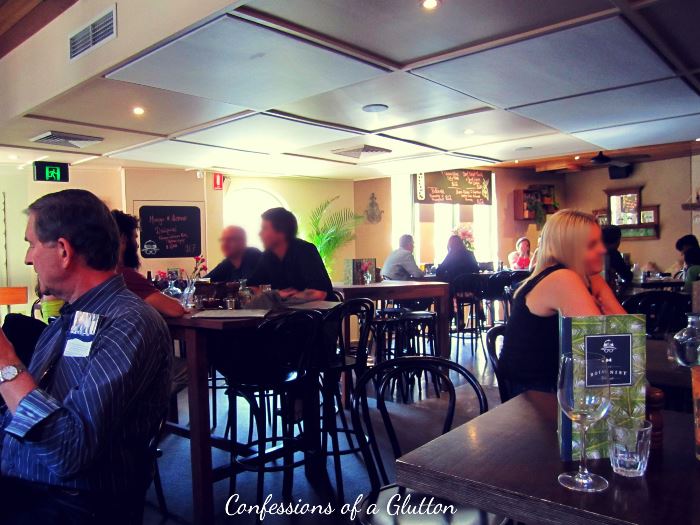 But before we get to the food… the list of drinks only contained cocktails, wine and beer and even for me it was a bit too early in the day for a cocktail. We asked the waitress if they had any juices or non-alcoholic drinks, and she said the “juice of the day” was an apple-ginger-other healthy things-combination, which for Kath and I, sounded way too healthy. She also said that with any of the cocktails, they could make a mocktail version of it for us, and we were much happier with this idea as the cocktails all sounded delicious. With this in mind, we both had a The Pacific Isles, the full version being Pampero Blanco rum blended with pama pomegranate liqueur, coconut, pineapple, lychees and ice. 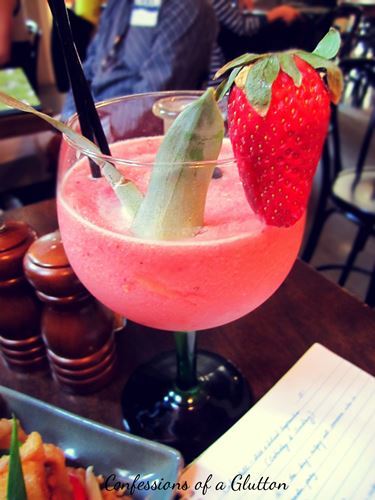 The cocktail version is $16, and we paid but a mere $8 for the mocktail version. What a bargain! It was a massive glass and tasted beautifully fruity and tropical.

Onto the food. The first sharing dish to arrive was the Salt and pepper encrusted squid with chilli, fresh coriander & lime ($18). 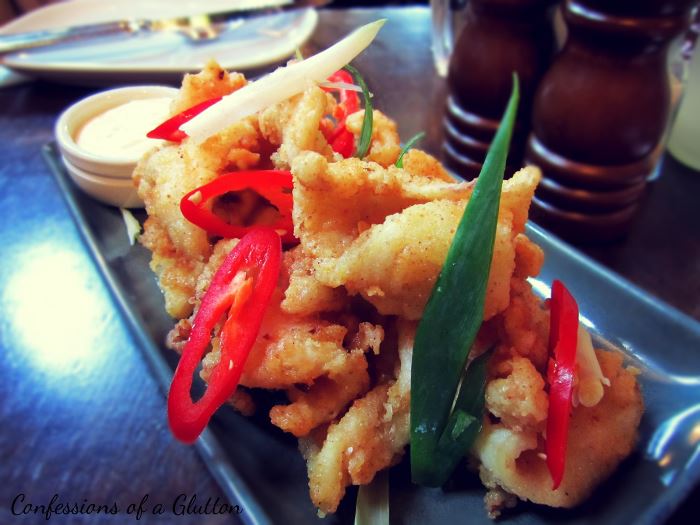 The coriander was mysteriously absent – something I was happy about but Kath not so much. The squid was tender and coated lightly in the crispy, fragrant batter, which went beautifully with the creamy accompanying aioli. I had ordered this dish the first time I was here and it was exactly as delicious as I remembered it. It’s nice to know they are consistent with the quality of their dishes.

The second dish was also a repeat from my first time and this was one of my favourites. The Warm roasted root vegetable salad with toasted walnuts, mixed with green leaves & apricot dressing ($17) is everything a salad should be: 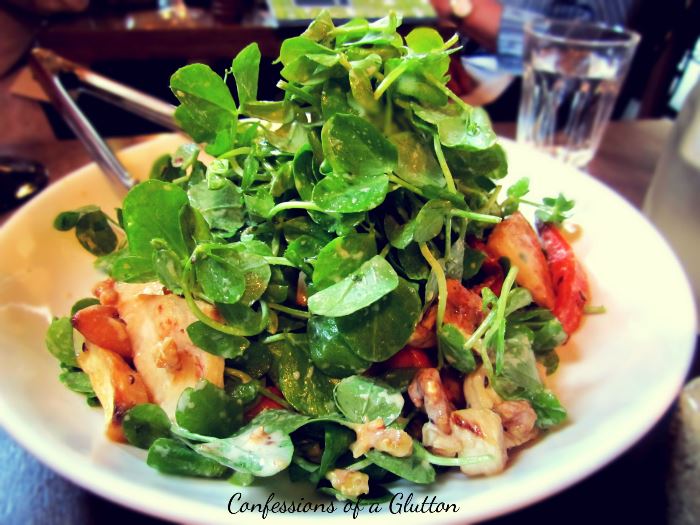 The pieces of root vegetable (carrots, parsnips, etc) still retained a bit of their crunch and were wonderfully sweet, having been roasted lightly. With the slight bitterness of the watercress leaves, crunchy walnuts and the fruity dressing, it was a refreshing salad perfect for the start of spring. It was a very large salad and I was happy when the waitress asked if we wanted to have the remainders in a take away box, free of charge. Service was incredibly attentive, friendly and simply amazing over lunch and on the previous night I was here.

With Kath being a seafood enthusiast, we had ordered the King Crab Sliders: Mini Gourmet Burgers with Alaskan king crab & prawn with khol rabi remoulade ($20). Khol rabi is a vegetable not unlike celeriac. 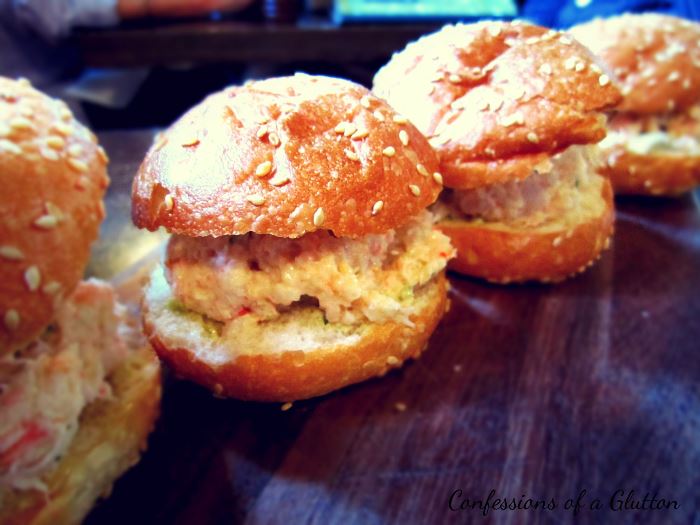 The sweet, buttery brioche sandwiched the cold, creamy mixture of crab and prawn meat and was quite rich, but the khol rabi added a lovely refreshing crunch. One was quite enough for the both of us, and we were pushed to have another one each – I think it’s better shared when you have one each among four. 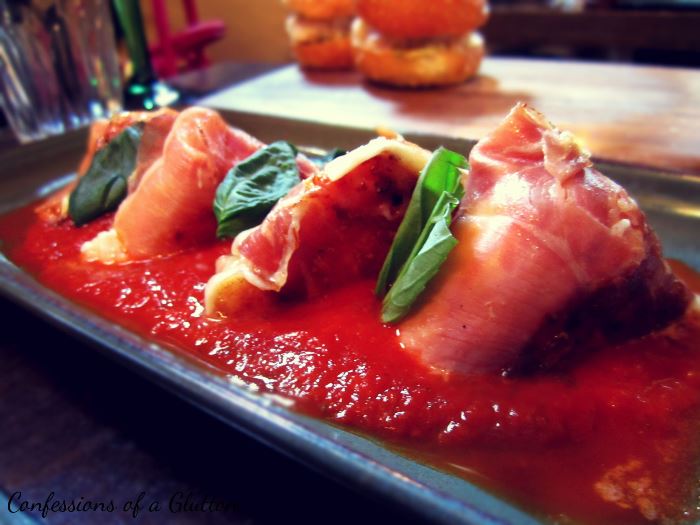 Creamy and slightly melty bocconcini and wrapped in beautifully soft pieces of prosciutto which were ever-so-gloriously crispy around the edges.  With the tomato puree, it was quite pizza-like and downright delicious. We polished these four babies off with ease.

I was straining slightly at this stage but Kath was keen to try the blackboard dessert, the Baked quince with gingerbread, lemon curd and caramel popcorn ($12). It sounded like just a bizarre combination, but with her persuasion I gave in and I was incredibly glad I had: 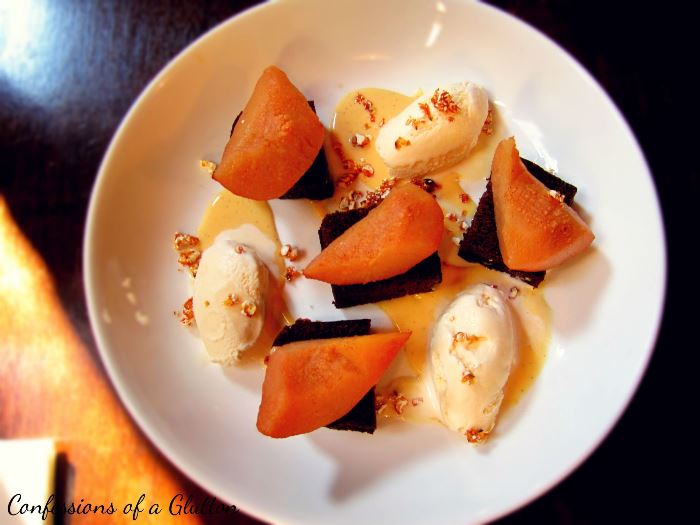 In all honesty, I hadn’t been expecting such a stunning dish to emerge. What presentation! We were both blown away. I’ve never had quince before, and I found that it was soft and easy to cut through, it’s texture almost like a hard pear. The gingerbread was fluffy and fragrant with spices and with a little bit of vanilla ice cream and the buttery lemon curd (which was sweeter rather than acidic), I have no hesitation in saying that it was one of the best desserts I’ve ever had.

Our total bill came just to $50 each, and for the amount and quality of food that we had had, including the mocktail, it was fabulous value, considering that at most fine-dining restaurants, you would be hard pressed to have two courses for that price with a drink. This place is an absolute gem and were it not for my obligations as a blogger, I wouldn’t want to tell you about this place so I could keep it all to myself! 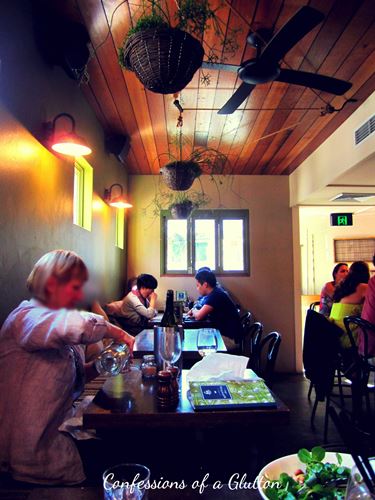