I’m a sucker for a bargain. Especially when it comes to food. I regularly trawl through the restaurant deals on the well-known sites of Scoopon and Groupon, and I’ve found over the years that they’ve been a bit hit and miss. However one night The Sister referred me to a new one, called TravelZoo, where they had a deal at Westfield Sydney’s Cloudy Bay Fish Co. for an entree of either clam chowder or mussels, then fish of the day with salad and chips, both paired with a glass of wine. As I had been eyeing up this place for some time, I bought two vouchers (because it’s miserable dining by yourself) and luckily Fashion Obsessed Girl was available to join me on a Thursday night after work, on the proviso we did a bit of shopping. 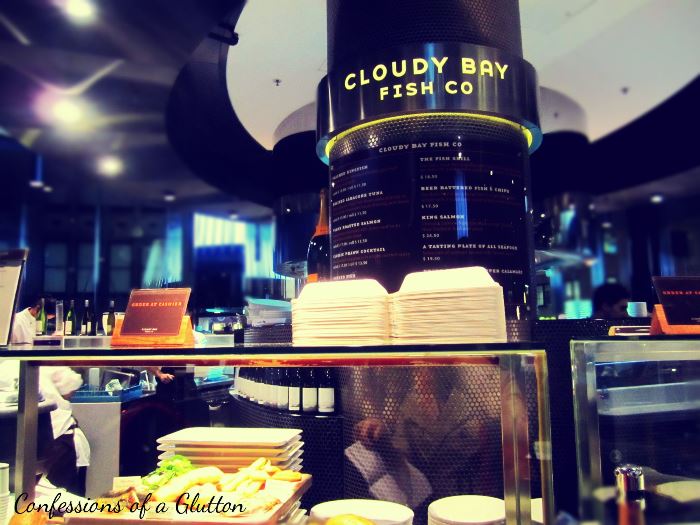 They do takeaway and you can also take your food to sit somewhere else in the food court, but if you want to have a drink you sit at the half-circle bar at the back, where you can view the kitchen and you have table service. 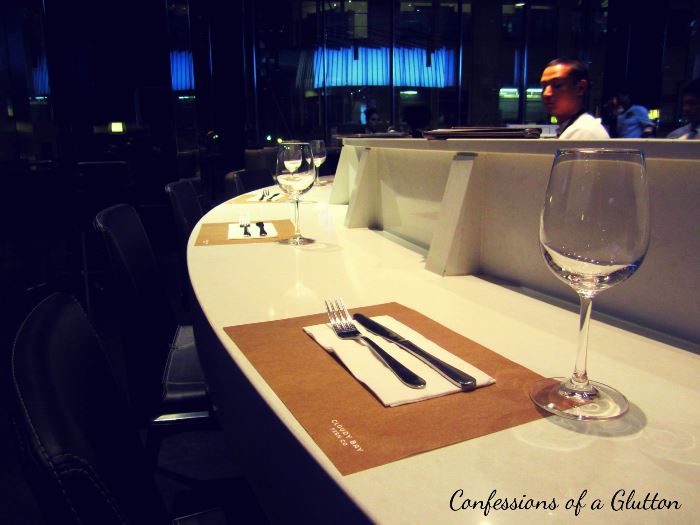 The white included in our meals was the Cloudy Bay Sauvignon Blanc from Marlborough, New Zealand. 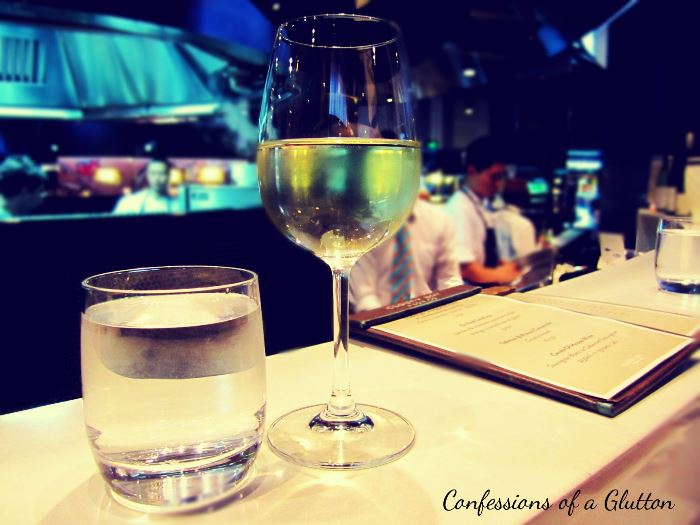 A slightly more acidic and drier white, it was very appropriate for having with seafood. We had a look through the menu that was provided, and while I had originally been thinking I’d go for the chowder, Fashion Obsessed Girl chose that and so I thought that I should probably go with something different. The menu said the mussels were cooked in a butter sauce with cherry tomatoes and parsley, and it sounded good so I went with that. I was sure glad that I had. 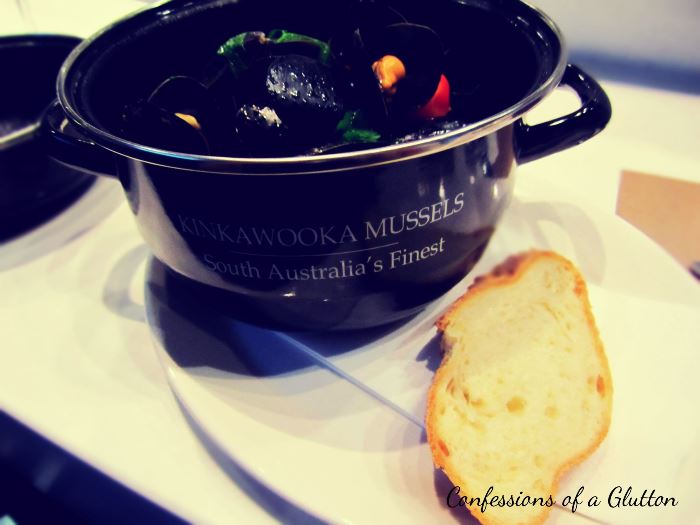 I had been expecting a small pot of mussels but the pot that came was no smaller than the size of my head. I lifted up the lid to see it full of gorgeous, fresh mussels all open up at me, lightly fragrant with butter and herbs. While I’m not completely adverse to mussels, I usually can only have a few. But these had been so tenderly cooked and steamed that I couldn’t get enough of them, and I found myself ploughing through the whole lot – only remembering about eight mussels or so in to offer to share with Fashion Obsessed Girl – oops! I did find though that with the depth of the pot and amount of mussels, the butter sauce was all at the bottom and quite hard to get to before the halfway point. 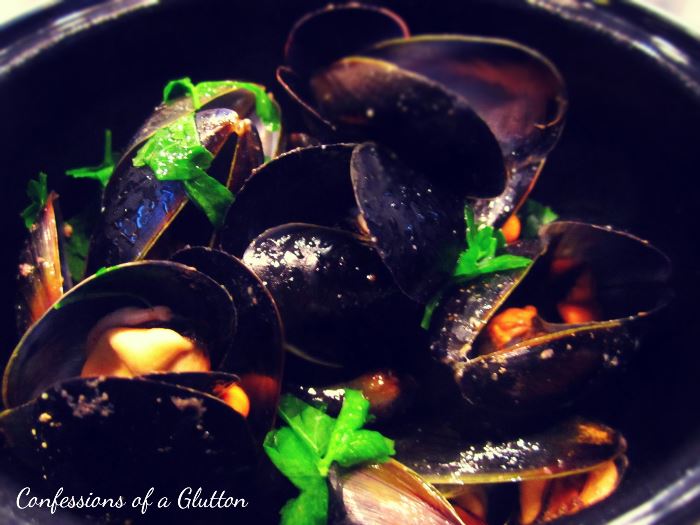 Fashion Obsessed Girl’s chowder came in a little bowl with dipping bread (I also had a slice of bread but didn’t touch it, for fear of getting full before my main). It would have been nice if the bread was toasted, or at least heated. 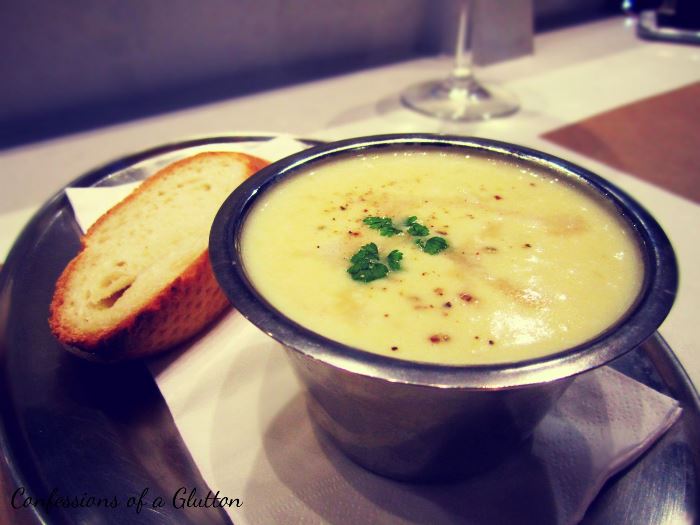 It was a very warm and soothing seafood soup, quite creamy but sort of lacking in seafood pieces. I could discern ‘bits’ of what I was assuming was seafood, but couldn’t identify anything in particular, nor of what was supposed to be the core ingredient from its title – clams. But it was a tasty soup regardless.

We had a selection of fish we could choose from for our main, and I went for the King Salmon, which was grilled – the healthiest way to eat your seafood! 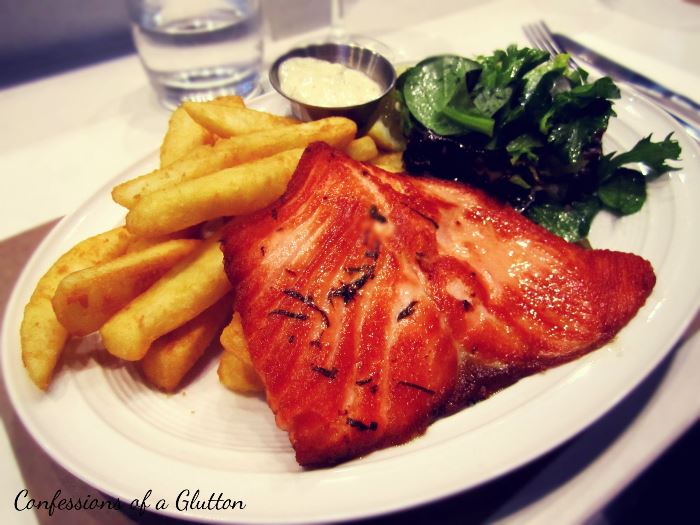 It looked a little dry on the outside, but once you dug into it, the flesh pulled apart easily and was flaky and moist. It went well with a bit of tartare as it had been minimally seasoned. But the CHIPS. Oh Lordy, the chips. What a generous serve! Perfectly crunchy on the outside, soft on the inside and just the right amount of salt – Fashion Obsessed Girl was grateful at the end of the meal when the waiter offered to clear the plates because she couldn’t stop eating the chips.

She, on the other hand, had opted for a white fish, being the barramundi. It was also quite minimally seasoned but well-cooked. 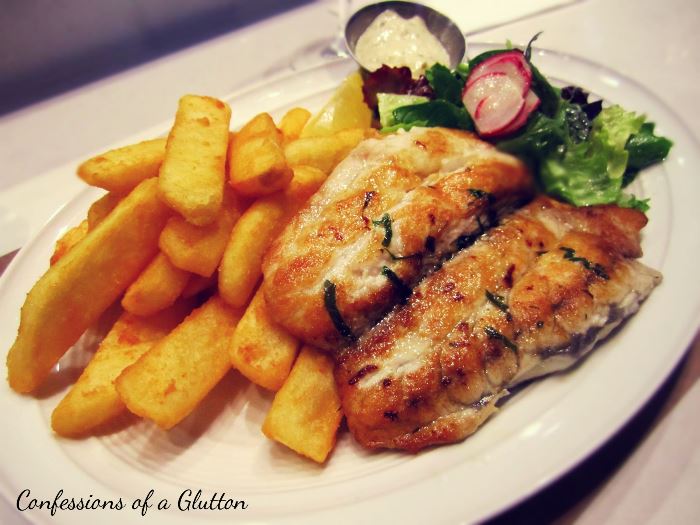 Sometimes there is really nothing better than simply-cooked fresh seafood, a few nice accompaniments and a glass of wine. I have to say, I originally had my doubts about this place when reading about all of the negative reviews on Urbanspoon, but I can say that those mussels are well worth a visit.

Leave a Reply to Cath @ Confessions of a Glutton Cancel reply