Another year down, and the question that’s asked is: ‘Where do you want to review for my birthday?’

The Sister knows me too well! But I ultimately let her narrow down the choices and it was a toss up between an old favourite, BBQ King, or the yet-to-visit Golden Century a stone’s throw away from one another in the midst of the hustle and bustle of Chinatown. I had heard many Sydney chefs (Neil Perry for one) frequent Golden Century once the dinner shift has finished as they’re one of the few restaurants in the relatively main CBD that are open late. Therefore, The Sister, her fiance and I was keen to check out what it was all about.

Once you go past the large wall of live seafood tanks facing the street and up the escalators to the top floor, you’re directed by a mini-SWAT team of wait staff to your table. I don’t know about previous reviews, but service was particularly attentive on the Tuesday evening we attended, with waitstaff stationed a couple of metres apart around the walls of the main dining room and our teapot of Jasmine green tea ($5.10) being refilled no less than 12 times during our meal.

It’s decorated in typical up-market Chinese restaurant style, and for a Tuesday evening it got surprisingly busy, particularly with a few large tables of Caucasian corporates. 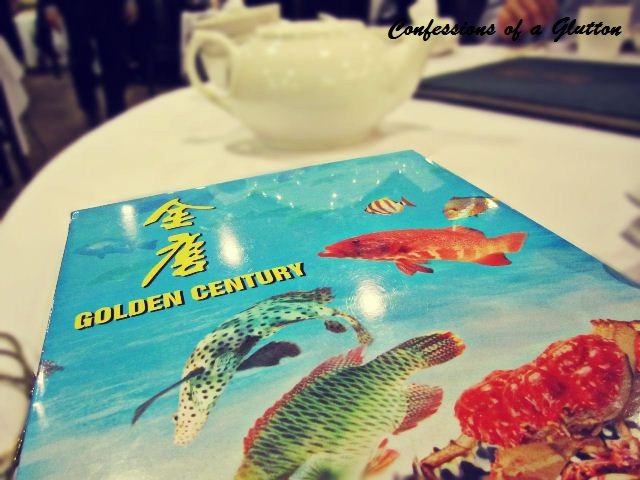 The menu predominantly features live seafood, but with The Sister and I being a bit squeamish about the idea of seeing what we’re going to be eating alive half an hour before it’s brought cooked to our table, we skipped that part of the menu. It’s quite a popular aspect of Asian food culture – it’s a heavy emphasis on providing the very best at its freshest. And while I can understand this philosophy, it doesn’t sit too well with me.

But to start with we had a complimentary soup; something that’s quite common in larger Chinese restaurants, although I’ve discussed my meal with a number of people and they’ve never received free soup before… Not sure what it takes to get free soup? 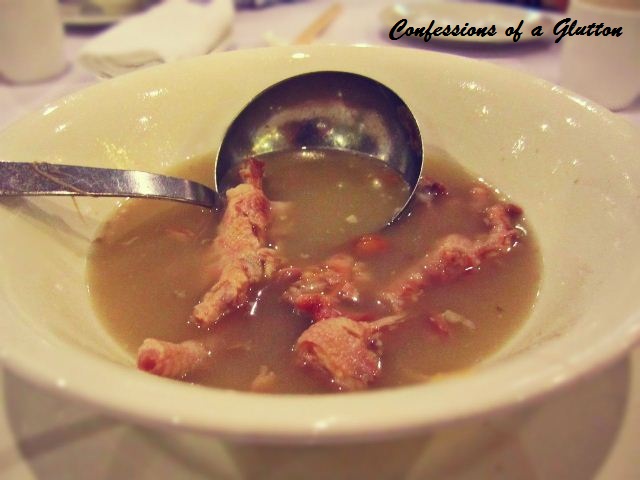 The soup was a warmingly hot cloudy chicken broth with not much in it other than…chicken feet. I’m a person that eats with my eyes as much as my mouth, and so I’ve always been slightly adverse to chicken feet in yum cha. But considering I didn’t have to actually gnaw one this time, I sampled the soup and some of the shredded meat that was flaking off the chicken from being so well-cooked and found it quite delicious.

Onto the regular parts of the menu then? We had already decided on our mains but decided we needed some more vegetables. Stuck for choices that didn’t include bean curd, I pointed out the San Choy Bao ($9.90 for two serves) and we agreed. It’s something I’ve never eaten out as it’s quite a simple Chinese dish that we’ve made at home a handful of times, but why not give it a go to see how it’s done differently? 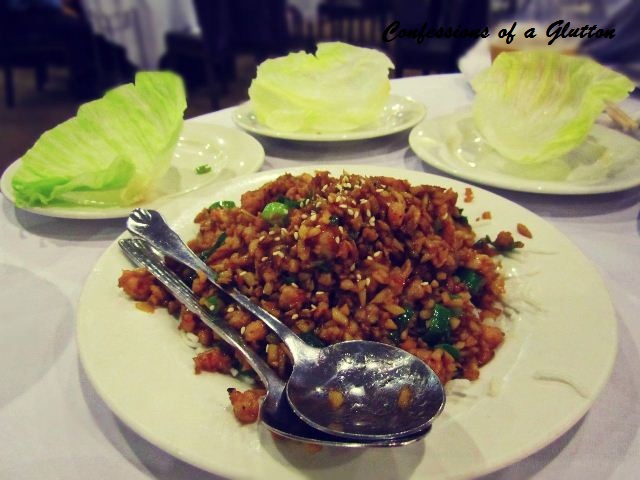 When it arrived we were a little perplexed as it seemed to look like a pile of fried rice. The waitress spooned the mixture into the neatly-trimmed iceberg lettuce cups for us before whisking the plate and serving spoons away and we had a closer look at what was in the san choy bao. 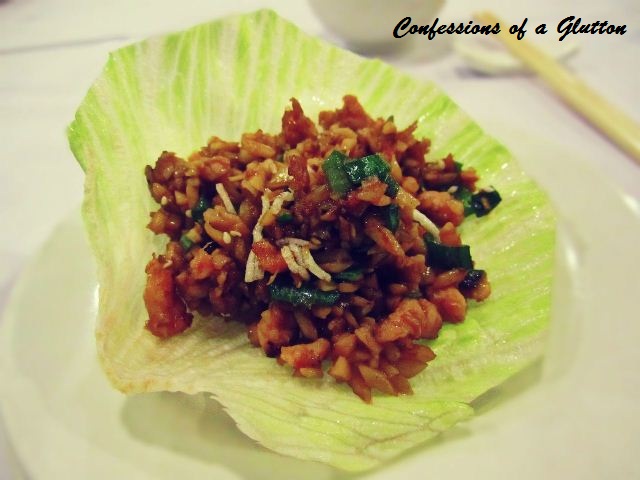 Thank goodness it wasn’t rice after all, but delicately cut pieces of bamboo, water chestnuts, prawn meat, pork mince and preserved vegetables. It was delicious and I hoovered up two of these lovely parcels.

Next to arrive was the dish requested by the sister: Half Roasted Duck served warm ($35.20). 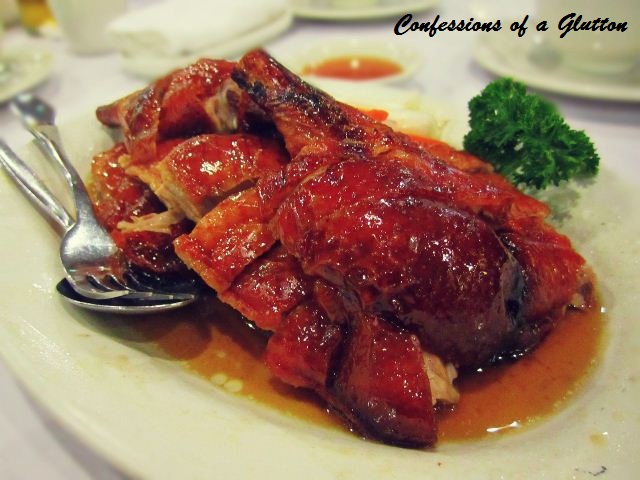 Served with a very syrupy but not too sweet plum sauce, the duck meat was tender, juicy and oh-so-good with its lightly crispy skin. I can never get enough of that gamey flavour.

The Seafood and Bean Curd Hot Pot ($35.20) was the next to arrive, a large clay pot full of large prawns, fish, squid and huge spongy pieces of bean curd that had soaked up all of the savoury juices in the pot. But we found that we needed a carb as an accompaniment for this hot pot, and so a request was made for Steamed white rice ($5.60) at this stage.

And the very last of our mains was one of my favourites, the Combination Fried Noodle ($25.30) because I love, love, LOVE these crispy noodles!

There’s nothing quite like the textural contrast you get between the initial crunch from the outside noodles to the slightly softer and chewier noodles that have been soaked in a bit of the seafood sauce. The barbeque pork, seafood and vegetables were all cooked well.

When we finished our meal, we were all surprised when our plates were cleared and we were brought a complimentary dessert as well. What a delight! Saved me looking for something sweet later on in the evening.

It was a large bowl of sweet bean curd skin soup, a few Chinese pastry delicacies and slices of freshly cut refreshing watermelon. The Sister and I had never tasted anything quite like the soup, as it was warm, sweet and the bean curd skin had a bit of a slippery, slimy texture a little like what you would imagine the skin off the top of hot milk would taste like. But once one got used to it, I found the dessert soup  a rather enjoyable way to finish off the meal.

Very good service and a pleasant Chinese meal all round.