I’m a little over the fancy bar scene. As sophisticated and stylish as they are in true Sydney-style, I’m more of the type of person that looks for character, charm, and quirkiness. So when a girlfriend suggested Frankie’s, I was quite interested in checking this place out.

Frankie’s is located on Hunter Street, a little way from Wynyard station towards Chifley Plaza and just next door to the infamous Malay-Chinese restaurant reknown for their laksa amongst the business-people around the area. It’s so overt, it’s covert, with its brightly painted Italian colours and a neon flashing sign.

Sometimes the doors are open, sometimes they aren’t. Once you push them open, and descend the short set of stairs, you’re in a warmly lit bar with black and white chequered floor, strings of dried chillies and garlic hanging from the ceiling, vines twisted around the walls among the framed photographs, and red-white chequered tablecloths upon which stand those cheesy melting candles. It’s Italiano overload. Toto, I have a feeling we’re not in Sydney anymore!

Frankie’s has gone quite American-esque in its manner of serving pizza, in that you don’t have to buy a whole 8-10 inch pizza, but that you can also order it by the slice for $5. The slice options are more limited however, being the more mainstream options like sausage and margherita. This is also a meal-for-one friendly option, meaning you can come by for a solo drink and a slice of pizza without feeling the pressure of having to round up a group for a visit.

To order your pizza, you go up to the counter and you’re given a receipt with a number on it, and when you’re pizza is ready your number will flash up over the counter indicating that it’s ready for collection. It kind of keeps you distracted from your conversation as you’re continually flicking your eyes towards the counter. But while you wait, do check out the pictures on the wall. I never fail to be curious about the identity and nature of the people in publicly displayed photographs. It’s like those family portraits you get when you buy blank picture frames – were these people actually a family or were they brought together for the sheer purpose of taking promotional photos?

Our pizza was finally ready and we had ordered the Frankie’s Special ($20), a thin-based pizza topped with figs, gorgonzola, tomato, prosciutto and cheese. 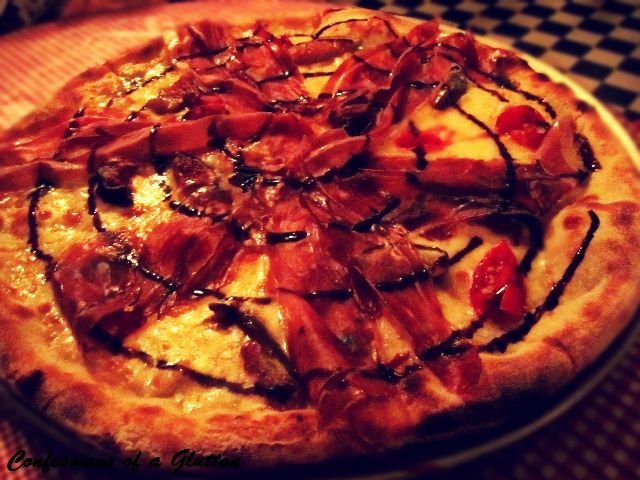 The pizza was topped with swirls of what tasted like barbeque sauce – its sweetness contrasting surprisingly well with the saltiness of the proscuitto. It was a very tasty pizza and us two ladies were happily munching away when my girlfriend pointed out something green on the pizza. Huh? A closer examination confirmed that it was the mould from the melted gorgonzola. Reassured, we resumed eating. Eating blue cheese has to be the only time when you see mould and are unfazed 🙂

Don’t mistake Frankie’s for being a pizza restaurant, however. This place is predominantly a bar and you can tell from the menu having one page devoted to pizza, and the others all devoted to their extensive list of different wines and beers.

My girlfriend recommended the Frozen Margaritas ($16), where you have to go through the swinging doors to the other bar to get. I didn’t get a photo of the inside as it was a bit dark, but it was noisier and more popular with the younger business crowd, playing 80’s music and with a small line of pinball machines in one corner. I bought my margaritas and returned back to the main bar to enjoy them.

I was expecting something more the flavour of an alco-pop, having had a Rekorderlig slushie and daiquiris before, but this margarita was a potent hit of alcohol. It wasn’t watered down in the slightest from being made into slushie. While the salt around the rim seemed to make my tastebuds shrivel up as soon as my lips touched the glass, you soon got very used to the unique combination that makes up a classic margarita.

A very charming bar and I’ve heard it gets very busy on Friday nights, as does any place that the business-crowd knows about. I’ll be back to try another pizza and for another one of those margaritas. 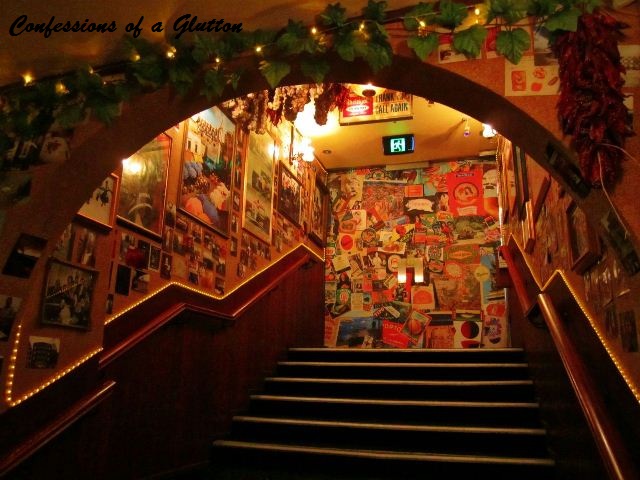