I still remember a couple of years back when Reel Cafe used to be in Roseville, next to the ancient Roseville Cinemas, and I was absolutely devastated when they decided to move further north into Wahroonga. Reel introduced some of the finer points of Modern Australian dining to me, but the most reminiscent was my first taste of their unbelievable fish pie. With the generous chunks of fresh fish, potato and prawn smothered in a rich, creamy white sauce, it was a turning point to the way I now look at seafood and pies.

Therefore I had no disagreement when Kulinary Adventures of Kath suggested dinner there one Friday evening. She made a reservation on Wednesday and was told that there were only inside tables remaining – for two days before the date at a suburban restaurant on a weekday, this was quite surprising!

I arrived early on the Friday evening and was greeted enthusiastically by the waitstaff – always a good start. I was lead to our table inside and being just on 6.30, there was still plenty of natural light as the sun was setting.

The interior was modern, with various abstract red-based paintings on the walls and two chandeliers on either side of the entrance. The set out of the restaurant was a little unusual in that the bar was a square kitchenette in the centre of the restaurant floor (which I was sitting beside). As the time passed 7.00 and the restaurant steadily filled up, the noise level did become quite loud. The clientele of the restaurant are predominantly middle-aged couples and small groups, with the occasional larger group there for a celebration.

Kath had already been to this Wahroonga location a number of times, living a convenient five minute walk away, but I was re-acquainting myself with the menu. I recognised various menu items from their Roseville days: the duck small plate and their trademark Reel fish and chips. We were torn between sharing a few small plates between ourselves, but selfishness ultimately won out and we decided to go with sharing a starter, then having a main and dessert each.

We began with the Garlic Ciabatta ($4) which arrived very quickly and with a tiny garnish of microherbs.

It actually looks a little like massive hash browns in this photo. The two pieces of ciabatta were liberally soaked in fragrant garlic oil and toasted ’til crisp. Delicious.

Our mains arrived equally as fast – we were only halfway through our ciabatta, or maybe that was because we girls were talking so much about the latest recipes we’ve tried.

Kaths’ Rocket linguine, sauteed prawns, lemon zest, pancetta and cream ($28) was an extremely generous serving, and she had some difficulty in finishing it. The linguine was cooked perfectly to my taste (a minute past al dente), however I couldn’t really taste the characteristic ‘peppery’ nature of the rocket. Biting into the pancetta alone made your palate cry out for a sip of water, it was that salty – but when a small piece was consumed with a twirl of creamy pasta, the overwhelming saltiness was balanced. The prawns were lovely and tender. 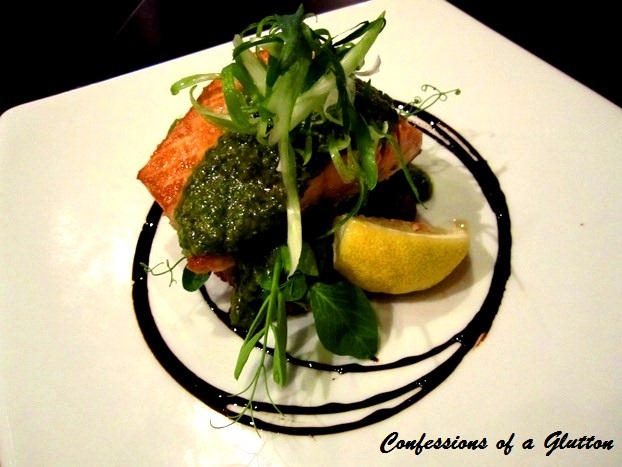 My Atlantic Salmon, broccoli, bacon & quinoa pattie, salsa verde ($30) arrived beautifully presented – on par with any of the hatted restaurants I’ve visited in Sydney. The Salmon had been perfectly cooked to my preference – medium rare, and the salsa verde lent the fish a wonderfully herby flavour that wasn’t overpowering in the slightest. The broccoli gave the health nut in me a high five – that’s my ‘being good’ part for the night done!

The bacon and quinoa pattie, which had sparked my curiosity from the menu, was quite a novelty. Being quite crumbly, the cooked white quinoa replaced the usual rice, breadcrumbs or other binding agent usually present in patties. Beautifully punctuated with one of God’s best inventions, bacon, it was savoury and moreish.

We were straining slightly but agreed that we must have sweet. Upon looking at the menu once more, I decided that while I had previously had my eye on the baked chocolate mousse tart, I was more in the mood for the tang of citrus and so went for the Lemon meringue tart, citrus and ice cream ($12.50). 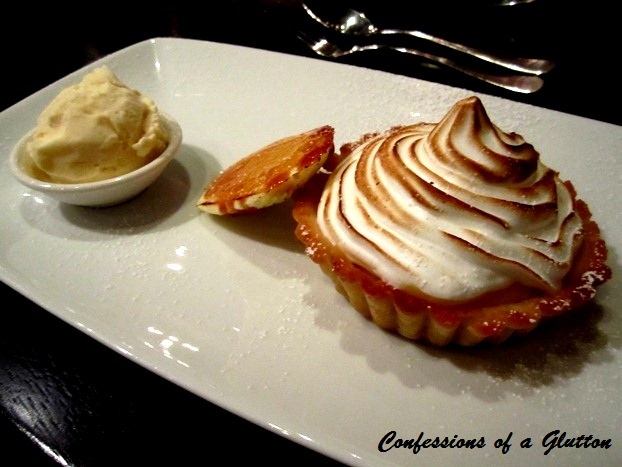 The shortcrust pastry of the tart was one of the best pastry shells I’ve had out, even better than that of Bourke Street Bakery, in my honest opinion. With the lemon curd having just the right amount of zest (enough to make your tastebuds dance, but not to make your face screw up), the simple vanilla ice cream was a classic combination with it. The meringue was light and fluffy, with the torched swirls adding a slight bittersweet element of caramelisation. The ‘citrus’ was a bit odd: a lemon cheek that had been bruléed lightly. I wasn’t sure if I was expected to eat/lick/suck it, but I tapped off the solidified caramel and ate that anyway.

My dining companion’s Persian nougat glacé – Turkish delight & pistachio frozen cream, fairy floss ($12.50) came out very unusually presented. I wasn’t quite sure how to take a photo of it! 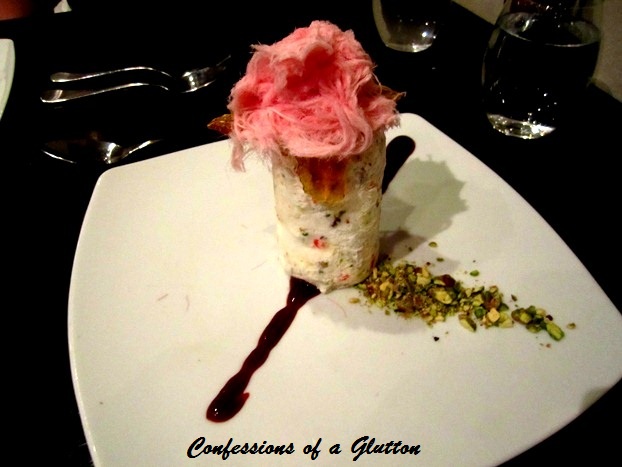 Underneath the rose fairy floss sat a solid piece of toffee, under which was the very long/tall cylinder of frozen cream. The frozen cream had lots of pistachios in it, and while we could see the red pieces of Turkish delight in them, they had been blended so finely that one couldn’t quite taste the pieces. The stripe across the plate was a very jammy compote, and helped in breaking through the ‘over-creaminess’ of the frozen cream. I think if the frozen cream had actually been churned into an ice cream, the texture would have been a lot silkier, and we spent a fair amount of time hacking into the frozen-solid cylinder to try and dislodge a piece.

I had finished my dessert and Kath had only managed to get through three-quarters of hers when she put her knife and spoon down, to have it almost instantaneously picked up by the waitress, who inquired if our desserts had gone well and if she could get us anything else. We declined on tea or coffee and asked for the bill, chattering away easily when the bill arrived. We were still chatting when what seemed like not yet one whole minute after the bill had just been placed down, it was picked up by a different passing waiter who asked if it was ready. While it could not be denied that service was friendly and very attentive (an element that many restaurants still struggle with), it seemed overly so and we felt a little rushed throughout our meal. I almost felt that we had a time that we had to be out by!

Overall, Reel on Redleaf is a welcome addition to the North Shore’s scarce fine dining scene. The kitchen team have done a fabulous job in using fresh ingredients and their modern techniques and skills, transforming them into inventive dishes that accentuate their natural essences and flavours. A beautiful restaurant and I’m sure I’ll return in the near future.