‘Oh look what they’ve added over there!’

‘And there’s the music shop that I bought my first guitar at!’

‘That bakery is still there! I remember they had amazing custard tarts.’

After having left my old suburb of Turramurra on the North Shore for 13 years, driving back along the highway was really such a trip back into memory lane. I had grown up in the suburb until I was 10 years old, and it was amazing to see the changes that had developed, and absolute wonder at seeing the shops that I used to frequent still standing there.

I wasn’t back in the suburb for shopping, however. Today I had a different type of indulgence in mind – a day spa. I’ve never actually been to a day spa before, and was surprised to hear that there was one right on the highway in Turramurra. It was when I drove past the Gillian Adams Salon & Spa that I realised it was where the old Commonwealth Bank used to be. 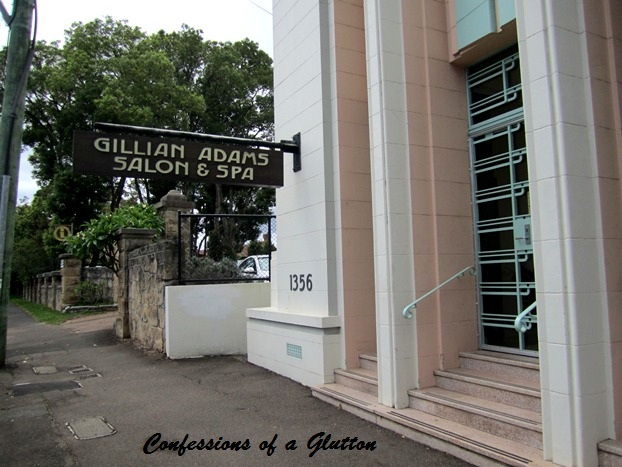 After circling the back streets I parked in the Turramurra Village Shopping Centre car park and made my way up to the main street. I had my doubts when I was up close to the outside of the rather old building, but once I entered the reception, I was surprised to see that it was incredibly modern inside with generous amounts of natural light streaming through the windows. The owner, Gillian Adams, founded the establishment about 20 years ago, and has had complete input with the design and antiques. While most of the interior is quite art deco and modern, you can see there are areas where Gillian has endeavoured to preserve the original essence of the building.

Once I checked in, I was given the day’s menu to select what I wanted for lunch after my treatments. The three options were:

Well, everyone knows that I can never pass up duck. I learned later that the menu changes monthly, with minor changes from day-to-day depending on the produce that the chef, Chris, at the spa can source (from not only their supplier but also the local grocer and butcher) and what’s in season.

I was shown to the ladies’, where I was given a locker key to a locker (which contained a robe, towel, and disposable underwear) and slippers. The ladies’ room was very modern, panelled with warm shades of wood and stone, and über clean. And I do love clean bathrooms.

After getting changed into my robe (and the disposable underwear, which was a complete novelty to me – actually, correction, this whole experience was an absolute novelty!), I was given a tour of the establishment. The establishment is much more expansive than the exterior of the building from the highway lets on, with an enormous upstairs salon for hair and make-up (where they use Laura Mercier cosmetics). The salon has a few packages that include hair and make up with the spa treatments, although many do come for the hair salon alone.

Downstairs and out through a glass door is the very well-maintained, lush garden and courtyard where clients can sit and enjoy lunch or morning/afternoon tea, and the kitchen is located in a tiny shed tucked away in the corner. If you follow the path through the garden, it actually leads to another part of the spa complex, which is where the manicures and pedicures are done.

I was absolutely surprised that I could not hear a single sound of traffic while I was inside the garden, despite its proximity to the highway. The garden was also incredibly well-designed and landscaped so that it was completely private – no nosy neighbours here!

Going back to the main spa treatment area, I learned quite a bit about the different treatments the spa complex offered – the Tranquility Bath Experience (depicted below), was something I’ve never heard of before – a hydrotherapy bath program that targeted a person’s specific body shape and wellness concerns, including lymphatic drainage, abdominal toning, cellulite reduction and relaxation.

The time had not yet arrived for my Vichy Shower appointment, so I was shown to the waiting lounge, where there were some very comfortable sofas and chairs, a selection of magazines, and a delicious array of colourful tropical fruits on the sideboard for clients to help themselves to. 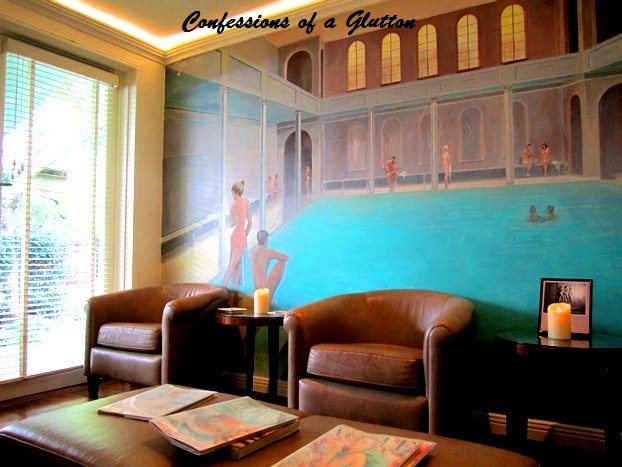 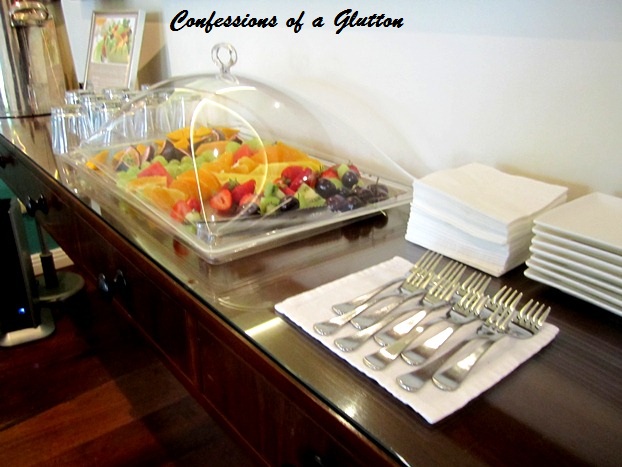 I enjoyed a pot of loose-leaf peppermint tea while I was waiting. While you’re in the spa complex, there’s an incredible feeling that you’re very much being taken care of. There is not a single instance where you’re left alone and wondering where to go next, but what they do is they escort you to a waiting room from one treatment or service before notifying your next therapist that you’re ready for the next treatment, who will then come and collect you. It’s service akin to that which I’ve experienced through high class international hospitality, and that you don’t usually expect to see in Australian society.

I was then called at this point for my anticipated Vichy Shower. The Vichy shower is the Gillian Adams Salon & Spa signature treatment, featuring water therapy and massage performed simultaneously. Warm water (turned to a temperature that’s comfortable for you) is showered on you through six shower heads whilst you’re being massaged, and fills the shallow tub underneath the mattress, where it then ‘floats’ beneath you. 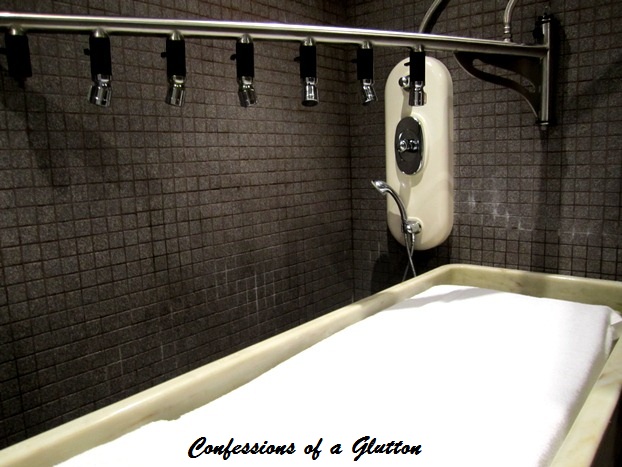 I had of course done my research on what exactly a Vichy Shower was before I came for the day. I had never experienced a spa treatment before (not even a facial), I have had one negative massage experience (I couldn’t move my neck for a week afterwards), and while I’m not a prude, I’m just a little self-conscious about nudity (albeit semi).

My hesitations were unfounded. My therapist Allysse was very friendly and talked me through the whole therapy before we began. I was treated to a coconut sea salt scrub exfoliation (which they actually make on-site), before being massaged with a coconut oil, given a facial, and the treatment finished with a light coconut moisturiser. I was relieved and surprised that the products only had a very light coconut aroma – certainly nothing like a lot of bath products on the market that give me a headache and make you smell like lollies (although I guess there are worse things you could smell of).

Allysse was professional but also more than willing to chat to me about the variations in clientele at the spa over the five years she had been working there, saying that there were now a lot more younger men in their late twenties to early thirties coming in for treatments now that it’s more socially acceptable. I was quite impressed by the strength in her hands and wrists as she worked away the tension in my neck I’ve built up over the past few weeks of work and the sore back muscles I’ve had for the last two days as a result of over-doing it at the gym. Bliss! I’m pretty sure I did drift off to sleep at more than one stage.

After I changed and had a quick make-over by Jess in the salon upstairs, I headed back downstairs to the beautiful courtyard where I was to have my lunch. 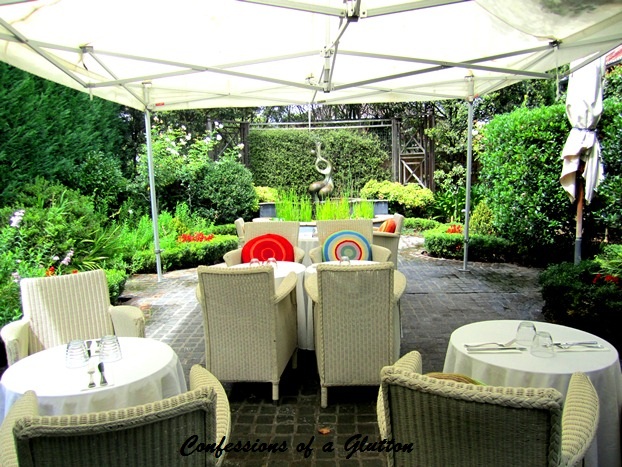 First to arrive was the bread – three slices of Turkish bread, lightly toasted, served with a little duo saucer of olive oil and balsamic vinegar. Unfortunately I had to turn down the offer of wine as I was driving, but was intrigued to hear about their fresh juice for the day, and so had a glass of that. The spa assistant said it was a juice of watermelon, pineapple, rockmelon, and a few other exotic things that I can’t remember for the life of me, but the juice was absolutely delicious and refreshing.

My duck arrived before I had even finished a slice of the bread, and all I could say was, ‘Oh my goodness’. 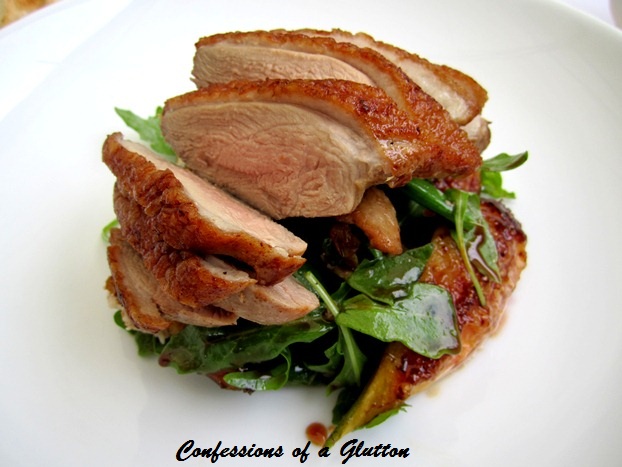 The duck had been beautifully seared, the flesh still tender and the fat well-rendered so that the skin still had that delicious crispy edge. Looking at the dish originally, I was a little concerned that the duck might have been a tad dry without any form of sauce (as I usually have duck French style), but the pomegranate juice in the salad went with it wonderfully. The figs were soft and sweet, while the candied walnuts were an absolute delight – crunchy and beautiful with their light crusting of sugar. 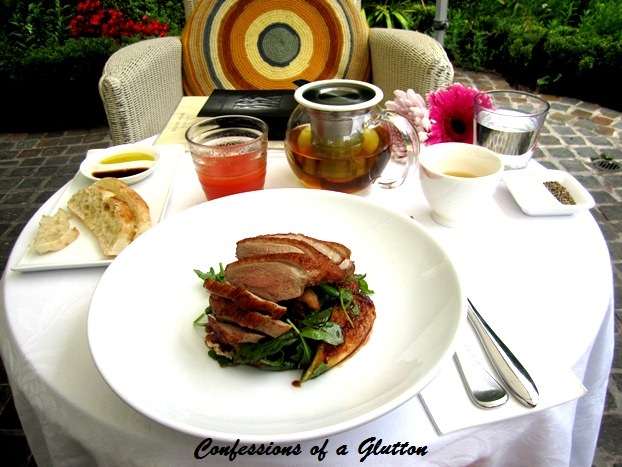 I was amused when I was told that the chef had prepared a ‘special dessert’ for me, and had asked quite worriedly if I liked chocolate.

The dessert platter arrived beautifully presented, with not one but TWO desserts on it – all for me! 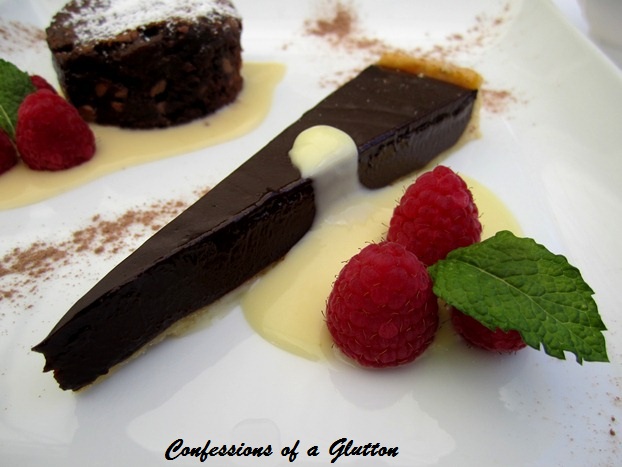 To the left of the dish was a very large chocolate brownie with a créme anglaise sauce. I had heard the ladies upstairs in the salon as well as the spa assistants raving about chef Chris’ brownies, and so I was delighted that I got to try one.

Perfectly fudgy inside, and studded with chocolate chips – it was pure, decadent chocolate bliss! To my utter dismay, I actually managed to polish off everything on my plate, the greedy girl that I am.

Whoever would have guessed that this wonderful little haven of paradise existed right next to the busiest road on the North Shore? A perfect place to simply indulge in some ‘me-time’… something that all of us need once in a while.