There’s been a month delay on this post as I came here right before I caught a flight overseas for my month-long holiday – so I apologise sincerely for the delay! I had been hoping to keep up with my blogging while I was overseas, but my dad owns a Windows ’98 computer and whenever I typed an email on it, the beginning of the sentence would only start appearing when I got to the end of it. It was frightfully slow and despite my attempts to persude dad to ditch it and buy something just a little newer, he always stuck to his guns and said he barely used the computer anyway. To use the internet at a more moderate speed, I ended up going downstairs and around the block to the local Motor Registry, as most government buildings in Taiwan have free Wi-Fi. I spent many evenings leaning against the outside wall, typing away and uploading Instagrammed photos of my trip!

Anyway, back on subject! On the day of my night flight to Taipei, Taiwan, I had a full day of work and the Sister and I decided that it was much easier and faster for us to just have dinner out before we went back home to pick up my luggage and she dropped me off at the airport. She asked me what I was craving and what I would most likely miss in a month’s time, and I promptly replied, ‘grilled salmon fillet’.

Where to find a grilled salmon fillet in Chatswood? Chatswood is known for its abundance of tiny cafes and Asian restaurants, not really Modern Australian cuisine. We had a look around the new Concourse area and chanced upon Carré Noir, to see that they had grilled salmon on their menu. Not only that, but my sister also had an Entertainment Card for Carré Noir, giving us a discount. Score!

There are two entrances to Carré Noir, at Victoria Avenue level next to the bus stands, or an entrance from the inside of the Concourse area, where there’s the cafe’s outdoor seating overlooking the grassy patch in the middle of the area. 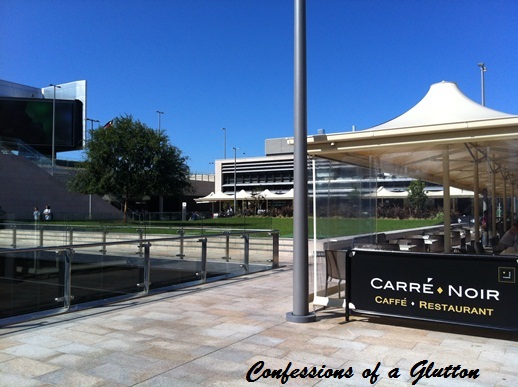 We had a quick look online while we were discussing what to order and were dismayed to see so many negative reviews on the place on Yelp. However, we decided to give them a chance. It was a quiet Thursday early evening and there weren’t very many patrons, so we got friendly service very quickly, although the dishes did take a little while to come out.

I had ordered the Grilled Salmon ($26), which was a grilled medium or well-done crispy-skin salmon with zucchini and fennel salad, salmon caviar, and mixed baby herbs.

I was quite impressed with the presentation when it arrived – very contemporary and it just screamed out ‘fresh’! The fennel salad had been dressed in a light lemon vinaigrette which didn’t overpower its characteristic aniseed essence, and the long strips of zucchini had been very lightly pan-fried so they were soft but not overly so. The salmon was just as I had ordered it -a perfect medium – and the skin was crispy and well-seasoned, crunching in the most delightful manner when I bit into it. The caviar was mixed in a little of the lemon vinaigrette, and it was very nice. The entire dish was lovely to eat, although I did seem to miss the baby herbs that the menu said there were.

The Sister has some more adventurous tastes than I do, and went for the Linguine Allo Scoglio ($20), squid ink linguine with green prawns, green shell mussels, confit fennel and prawn bisque.

The dish arrived with a scatter of Parmesan powder, and I looked somewhat suspiciously at the black pasta before the Sister invited me to try it. I gingerly tried a bit of the black pasta, terrified it might make my teeth black or something, and was pleased to find that it was in fact quite tasty. I pinched a prawn from her, but other than that I left her to finish her own dish (which she did quite happily) as I’m not a big fan of mussels.

Overall, we were very pleased with our meals but didn’t stay around for long as I had a flight to catch. The restaurant is very popular during the afternoon with groups of mothers who deposit their kids in the grassy area to play amongst themselves while they catch up for a coffee and gossip, so it can get a little noisy at those times.

A casual restaurant with a nice, relaxed vibe about it without the pressure of everyone having to order a full-size main. The outdoor area is very pleasant on a quiet, warm night. Definitely a place I’ll continue to drop by on while our Sydney summer is still going strong 🙂