I love good quality, fresh Japanese cuisine, there’s no doubt about that. For a while now I’ve heard about Sushi Tei and its two branches – the slightly newer one on Liverpool Street and its original counterpart on Chifley Square. I had been wanting to check it out, and with late night shopping last Thursday night with my girl Lara Croft, I thought that we should stick to our tradition of consuming large amounts of sushi whenever we meet.

We arrived at Sushi Tei for a very early dinner at 5.30 pm and the place was deserted save one table of three. Most of the tables are lined up against the floor to ceiling windows overlooking the opposite Chifley Square (a great view for suit spotting, might I say ;)), while taller seats are lined up to the sushi bar on the opposite side of the room. Apparently the place is bigger than meets the eye, as they have various function rooms around the back as well. The interior is very clean and modern, with comfortable furnishings. 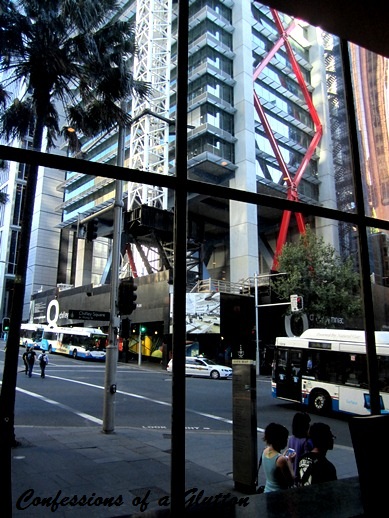 The menus are absolutely huge and covered about three-quarters of the large table for two we had. Unfortunately it means that you can only fit one menu per table and so Lara Croft and I had to take turns skimming through the menu, although she was pretty happy for me to pick and choose.

Service was a little slow to begin with, with there only being two occupied tables in the whole restaurant, but as more patrons began to trickle in for the dinner crowd, it picked up very quickly. Our waitress was all smiles, polite and courteous. After I made our order we sat back with our green teas ($4.50) and I noted the very big container of pickled ginger on the side of the table, lined up with an assortment of hot pot implements and the Japanese red pepper spice mix used for udon and hot pots. 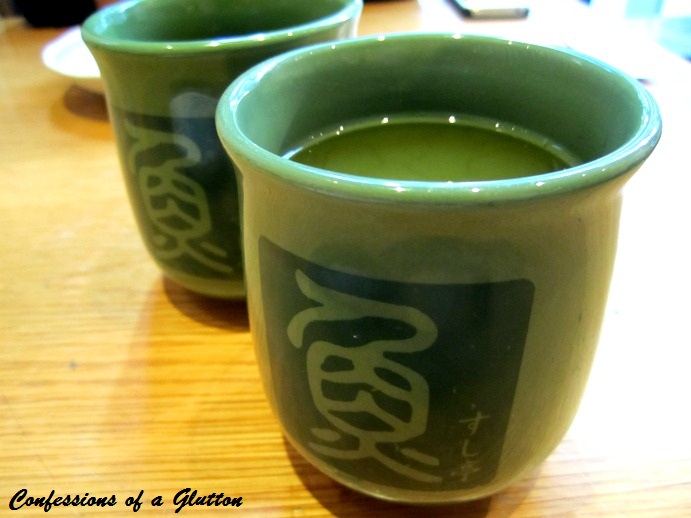 The first dish to arrive was one of the house specialties, the Aburi Salmon Roll ($18), which was eight pieces of crab meat and soft shell crab sushi roll, topped with blow-torched aburi salmon and fish roe. 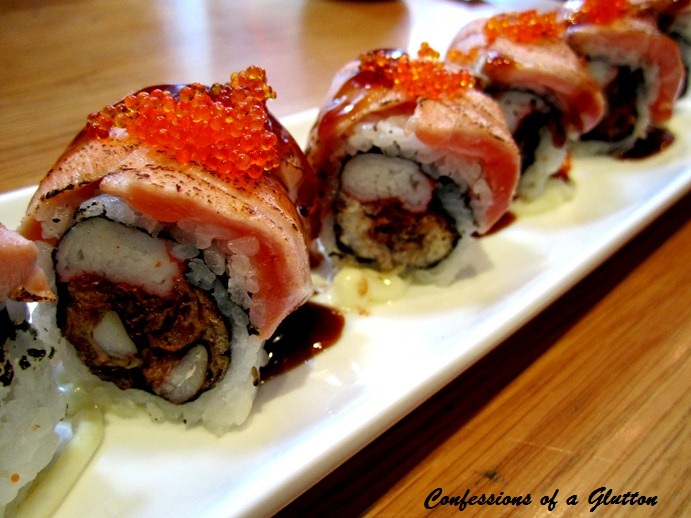 The plate had already been given a generous squeeze of Japanese Kewpie mayonnaise and soy sauce paste, with more soy sauce being lightly drizzled over the individual pieces, so further dipping was not required. The aburi was gorgeously torched ’til smoky and not over-cooked, and the soft shell crab inside the sushi was meaty, crispy and moreish. This didn’t last long with both of us being soft shell crab lovers, and so it was just as well that I had also ordered a Soft Shell Crab Maki ($17):

I didn’t think there was anything particularly stand out with the maki rolls, but nor could I fault anything. The fish roe was fresh, the rice clean and not gluggy in the slightest, and the soft shell crab crunchy and delicious.

A third dish was in order and after a long look through the menu, I left the final decision to Lara Croft and she suggested the Wagyu Nasu Kuromiso Dengaku ($22), which was half an eggplant topped with pan-fried beef in a black miso sauce and with a few podded edamame beans and sprinkle of sesame seeds. 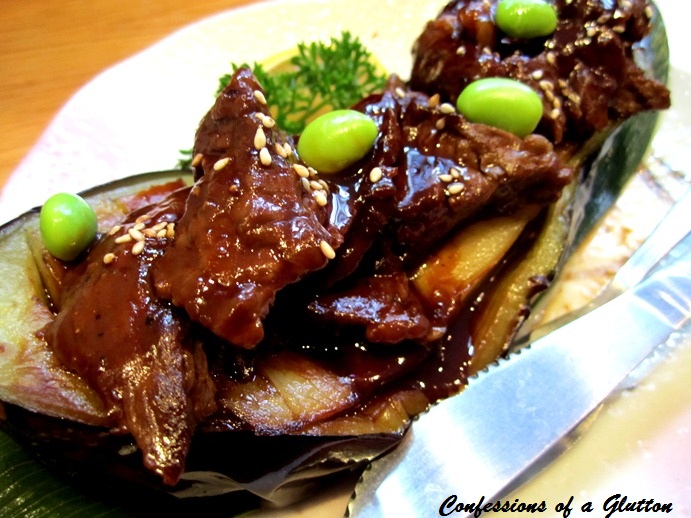 The pieces of wagyu were tender and succulent, with the black miso paste not having that over-saltiness that many miso dishes can have if overdone. The eggplant was also cooked very well, and we were relieved to see that the eggplant had been scored for ease of serving and eating. What an idea!

Ordering these three dishes turned out to be just the ideal amount. We paid the bill, and after doing all the awkward smiling you do in Japanese restaurants when all the waitstaff are bowing and saying thank you, we left the joint with a fair bit of physical effort in an attempt to ‘walk it off’.

We both agreed that overall, the quality of the food was fresh and of very good-quality for how it’s priced. If only I worked closer to Chifley Square, this would become my weekly regular! I will try the Liverpool Street joint the next time I’m down around the area for sure.