‘Why don’t YOU choose? I’m in the mood for pizza and/or tapas. You find a place.’

This conversation probably requires some background.

This was a brief Facebook post that occurred between myself and girlfriend Blondie on the weekend, where we had agreed to meet for dinner on Tuesday night. If you’ve read her brief biography, you will know that Blondie is a coeliac, and thus eating out can be a bit of a struggle. While being the advertised foodie within my friends, I find tracking down restaurants that cater to specific dietary needs far too exhausting (although I must say the food scene is slowly improving with gluten-free), and so I tend to leave it to them to scope out our choices for our meal.

After a brief walk along Newtown’s King Street, we decided to hop into Twelve, a joint we had spotted last time we walked past but ended up wandering into Moo Burgers (the lure of a duck burger with Brie and bacon was too much to resist). With a chalkboard out the front proclaiming today’s special, being Pizza/Pasta + a glass of wine/beer for $18, we were sold and traipsed inside.

By the way, why is it called Twelve? Its address isn’t Number 12.

The front of the restaurant faces the bustling King Street, with the front consisting of glass doors that open out, making it very pleasant semi-outdoor dining when the weather is favourable. The ceilings inside are very high, with lamps hanging down low on long cables and interesting knick-knacks along the walls from various types of rusty whisks to pot plants, as well as a floor to ceiling chalkboard of specials.

After a brief perusal of the menu (we had already narrowed it down while standing outside), I opted for a pizza whilst Blondie went for a risotto. Service was enthusiastic, although our waiter did have to check a few things with the kitchen, including if the pasta could be served gluten-free (despite the menu clearly saying so), and checking whether the special meal deal included any wine on the menu or was only for house wine. Our suspicions were confirmed when we received two glasses of house white – leaning a little towards the acidic side, but not unpleasant.

Our dishes came out speedily, and we were pleased to see they were generous servings.

Blondie’s chicken and porcini mushroom risotto with red onion marmalade was well-cooked and not ‘gluggy’, with the red onion marmalade giving the risotto a nice sweetness. The chicken pieces were also well cooked and very tender. While the mouthful I swiped was tasty, I had the inkling that it was the type of risotto where I may have tired of it after mowing through half of it.

I was very pleased with my pizza, which, to my estimation, was about 8-inches in diameter. And it was all for me 🙂 Hello sweetheart, come to mama.

I had ordered the pizza topped with prawn, chorizo, harissa, capsicum, heirloom tomato, fior di latte. I had no idea what fior di latte was, and upon Googling it on my phone, was delighted to see it was Mozzarella, one of my favourite cheeses. I would therefore assume ‘latte’ means milk. And yes, as you can see, my Italian is terrible.

As always, when I have pizza out, I had the battle of hands or knife and fork. Blondie suggested hands, but after the embarrassment of getting cheese strings all over my chin, I resorted to knife and fork like a civilised being.

The crust was deliciously thin and not floury in the slightest. I detected a slight note of honey in the crust, but that might have just been my imagination. The chorizo was sliced generously, the prawns tender and cooked to perfection. Chorizo and prawns…truly a match made in heaven!

I would imagine the restaurant would get a little noisy when full to capacity, especially with the large street-facing doors open. So if you’re looking to come here for an intimate D&M, I’d recommend coming early. I also noticed lots of patrons bringing their own bottles of wine, although Twelve does have an average-sized list of cocktails, wines and beers available. Certainly a nice spot to drop in for a bite if you’re tired of Thai around Newtown 😉 I might come in for their tapas another time. 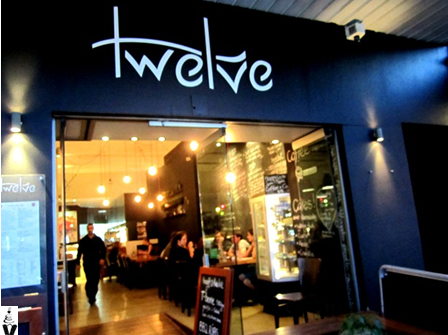