You know you’ve gotten over the novelty of birthdays when you don’t even bother to apply for leave from work! With today being the 4th of the October, I woke up at 6.30 am as per usual and trudged into the city for my usual part-time day job. I mean, I knew well myself that if I didn’t go into work, I’d end up stuck at home studying, and I knew which one I preferred!

But at the end of the work day I did have the treat of gelato with a very good girlfriend at Via Del Corso… I had heard good things about this patisserie in the new Pitt Street Mall Westfield, however not being entirely ravenous, we both settled for just two scoops of gelato each ($7). They had a good variety of flavours, although some were repeated. 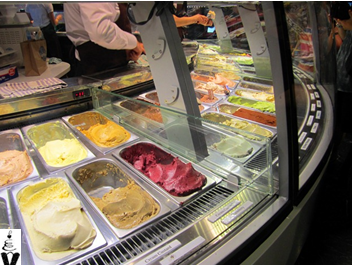 I went for a Fig, Honey and Pistachio (which I’ve heard many bloggers talk about), as well as a scoop of Hazelnut Praline. I preferred the Hazelnut Praline out of the two. While the Fig, Honey and Pistachio was considerably tasty, I never really spotted the fig at all. My friend had a scoop each of the Snickers and Macadamia, both of which were quite good although predictable. 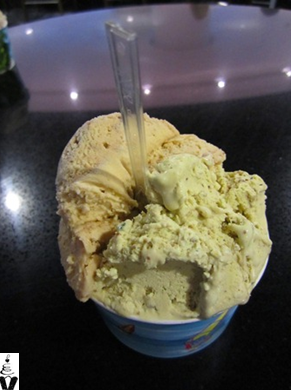 When I got home later that afternoon, I was surprised that my mum had bought me a cake – it’s tradition in our family to buy a cake every birthday, but with the amount of sweet delicacies and pastries I’ve been rolling out as of late, it was the general consensus earlier in the week that we wouldn’t need a birthday cake, and that it does get rather boring mowing through the same-flavoured cake until it’s demolished (the days following the birthday often involve a lot of cake for breakfast…). But mum had thought that ‘it wasn’t right’ to have a birthday without cake, and so she had bought me a little six-inch gorgeous green tea cake from Bread Top in Chatswood, decorated with chocolate combs, cream and strawberries.

The cake was light and fluffy, with a lovely intense matcha flavour. I was surprised at the sandwiching layer, as with these cakes it’s normally some sort of cream, however in this case it’s a thick custard of a jelly-like consistency with sweet red beans dotted throughout. I quite enjoyed the difference, despite not usually being a fan of the Asian-style bakery cakes.

Thank goodness it’s almost the end of the week! The long weekend seems to have made this week even looooonger!

Oh and remember to turn your clocks forward this Sunday for Daylight Saving! Hurrah to lazy long days of summer sunshine