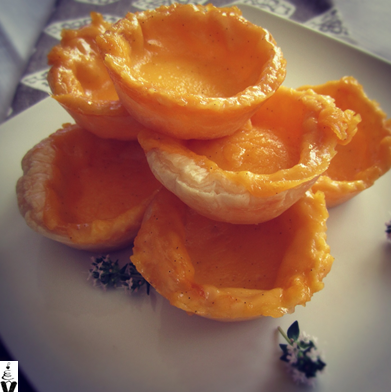 I’m laughing as I’m posting this, because this is truly one of the most disastrous recipes I have ever tried attempting! But as I told myself from the beginning when I started this blog – I will write about everything I bake, no matter how fantastic or terrible it turns out. We all have our days in the kitchen where things, for some in-explainable reason, seem to go wrong, and today was a fine example of that!

I saw this recipe in Coles Supermarket’s October magazine, which I picked up in-store for free. The Baked Custard Tarts on Page 44 looked devilishly simple (almost , in a suspicious way, too simple), so I decided to give them a go this beautiful Monday afternoon. Can I just say that I LOVE custard tarts – whether it’s the type you get from the bakery with the shortcrust and sprinkle of nutmeg, or the wonderfully fluffy and crackly egg custard ones from yum cha… OM NOM NOM. They never last long in my presence.

I made some small modifications to the ingredients for the recipe – I only had reduced fat milk in the fridge instead of regular, so I half-halved, half a cup of reduced fat milk with a half cup of thickened cream, because I can’t imagine anything tasting worse than reduced-fat custard. I also added an extra 1/4 teaspoon of vanilla paste to up the vanilla flavour, but other than that I followed everything by the book.

This will make you 12 Exploding Custard Tarts (haha).

Okay, I can tell you now that THIS is what makes these custard tarts EXPLODING custard tarts. I don’t know why on earth it’s 200 degrees when every other custard tart recipe I look at says 150 degrees Celcius. You will see the results of having your oven at 200 degrees later on. If you follow this recipe, I strongly recommend you preheat your oven to 160 degrees, then when you put the tarts in, lower the heat down to 150.

Grease a 1/4C capacity, 12-hole patty cake tin. I also mixed together 2 tablespoons each of cornflour and icing sugar and dusted the tray with it, just to ensure it wouldn’t stick.

Recipe says, Step 3: Cut 12 x 7cm rounds from pastry. Ease each round into prepared tin and prick base with a fork. 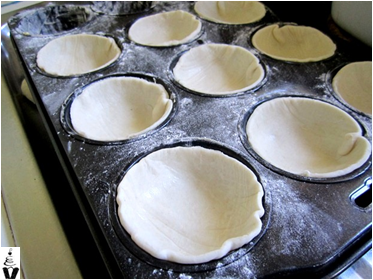 Fill with custard. Soooo everything is looking good at this point…I actually thought that there wasn’t enough custard…just as well I didn’t top them up…

Bake for 15 minutes until puffed and golden…

…or until you look in the oven and scream in disbelief with a loud: “OH MY GAWWWWWD (insert lots of appropriate swear words here)”

Even after sorta cleaning up the edges with a butter knife, they still looked pretty pathetic haha. I knew there wasn’t anything wrong with my custard, as I had taste-tested it, so it was only after looking up further recipes online that I noticed the massive difference in baking temperature. 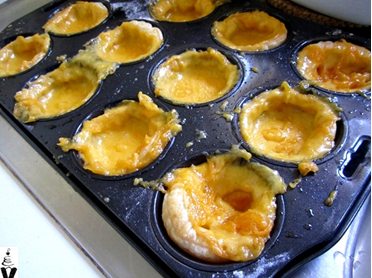 Oh well, something to keep in mind for next time! I was thoroughly annoyed and my mum walked into the kitchen to see me muttering disgruntled-ly to myself as I wolfed down the failed custard tarts…

Hey it’s not like there was that much of them left anyway, with half of the custard on the bottom of my oven! I spent the rest of this afternoon cleaning up the oven 😦

You win some, you lose some! Have a good week, lovelies… xx

P.S. Have decided that I’ll be going to Public Dining Room next Sunday for my birthday – the menu looks delish! Keep your eyes peeled for the review 🙂