So I recently have been craving apple and cinnamon teacake and I did a search on Taste.com.au to look up some recipes. I found it quite funny that for one of the recipes, it stated to stew some apple slices, then arrange it on a pre-bought teacake! What an absolute laugh. Now I’m all for shortcuts at times (bottled sauce in lasagne, for instance), but that really was taking it a bit far.

I found this recipe in my Women’s Weekly Afternoon Tea Collection  and with my new loaf tin and a shiny Pink Lady apple beckoning to me, I tied on my apron and made myself busy.

Preheat your oven to 180 degrees Celcius and grease your mini loaves tin. Line them with baking paper if you’re pedantic and terrified of your cakes sticking, like I am.

Beat the softened butter, vanilla and caster sugar in a bowl with an electric mixer until light and fluffy. Add the egg, beat until combined. Stir in sifted flour and milk, in two batches. 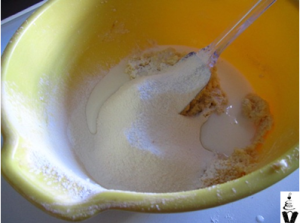 Divide the mixture into pan holes (it will be quite thick). Top with apple, brush with melted butter, sprinkle with half of the combined white sugar and cinnamon (I didn’t read this step properly and sprinkled on all of it by accident). 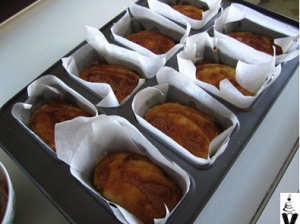 Bake loaves about 20 minutes. If you, unlike me, have the other half of the cinnamon sugar, sprinkle it on. Stand the loaves for five minutes before turning top side up onto a wire rack to cool.

The cakes aren’t particularly sweet, so I decided to also do the Spiced Honey Cream as stated in the recipe. I didn’t have any double cream in the fridge, but I did have some thickened cream and so I made do with that, adjusting the amounts for the honey and spices.

For your Spiced Honey Cream, you will need:

Place the spices and cream in a small bowl, whisk with an electric mixer until peaks form. Drizzle over the honey and stir in with a spoon. Serve with warm cakes. Serves 8.