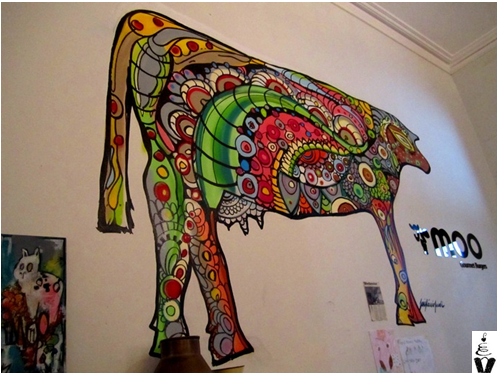 On a cold, windy, dark and miserable night, two girls were on a mission to seek sustenance on the endless realm of King Street, Newtown. Choices were abound, and many a time they stopped at various places of nutrition to peruse the expansive selections. However when stumbling across this place, of course who could resist the herald of ‘gluten free buns’!? Certainly not my dear Coeliac friend, Blondie, for whenever a search would result in gluten-free success, she would immediately rejoice.

Moo Gourmet Burgers has a number of establishments around Sydney, but this was the first we had heard of them. A very casual, laidback atmosphere inside – some couches with accompanying magazines if you were getting takeaway, simple wooden tables and chairs for regular patrons. Polaroids of customers adorn one side of the wall, with pieces of retro art and posters decorating the other walls in a very colourful manner.

After taking an agonising long look at the menu (too much choice!!) we finally made our choices and went to the counter to make our orders with the cheerful young girls who were serving that evening.  I was quietly pleased that Moo Burgers promoted themselves to be using free range and free to roam food products, so while it doesn’t make this an el cheapo establishment, it certainly makes you feel better about eating here. Tap water is a ‘help yourself’ arrangement. They also had an extensive range of milkshakes, which I’ve heard they’re known for, however with the burger I had chosen, I was sure I wouldn’t have the room for it.

Blondie was very much anticipating her burger; she’s had many gluten-free buns before and was interested to see how this place’s buns rated on the bun scale. 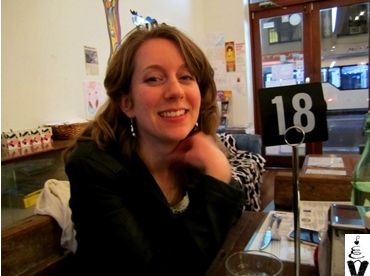 She had ordered the Classic Beef Burger ($10.95 + GF bun of $1), which was a reasonably sized burger with an Angus beef mince patty, tomato, mixed leaf lettuce, home made mayo and tomato relish. She was immensely pleased with the gluten free bun.

It turned out to be yet another occasion where my eyes would be bigger than my stomach. I had ordered the Duck & Bacon Burger ($14.50), which came with a duck mince patty, free range bacon, tomato, mixed leaf lettuce, home made mayo and orange jam. I could not resist the lure of adding on Tasmanian brie ($2.50), which was a generous slab, as well as a side of chunky chips ($4).

It was a delicious burger, moist and tender, the sourdough bun nice, soft and springy and not hard to cut through (I used knife and fork, not my hands like in this photo haha). Orange jam was fibrous, so it was nice to know that it wasn’t a marmalade that had just came out of a jar. However as nice as the duck patty was, if it hadn’t stated that it was duck, I probably wouldn’t have picked up on it. The big slab of brie was a wonderful addition though, and the chips nice, crispy and seasoned well.

This place is definitely going to be a keeper! I can just imagine trying a new burger off the menu every visit. I reckon I’ll drop in on one of their other establishments when I’m around the area 🙂