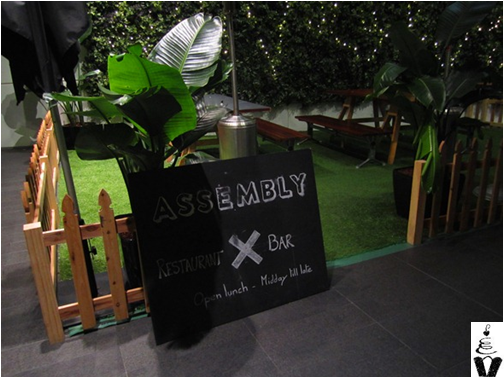 Somehow, it always ends up being me that organises law posse get-togethers.

Mind you, the others have also tried to organise things, but somehow only the events I organise pull together successfully.

With the holidays almost halfway through, a catch up seemed in order and with people on limited budgets, I thought my usual fine dining tendencies probably weren’t appropriate. Bar food was the best option, but I was reluctant to hit our usual spot of Bar333, as it’s frequented by suits on weekdays and is too noisy for any good conversation. Most of the quality bars I frequent are up along the Wynyard end of the city, however after doing a brief Google search of ‘Bar food, Sydney CBD’, Urbanspoon came up with Assembly Bar.

I had a quick look at the reviews and menu, and it sounded perfect!

Mind you, you would have absolutely no idea of its existence unless you had found out about it either online or via word of mouth. To get to it, you need to enter Regents Place behind the KFC on George Street, going past the Japanese eateries, glide down the escalator, past the Vietnamese Tuckshop where you can charge your Macbooks and iPhones for free, and once you see the fairy lights, the fake grass and outdoor furniture, you know you’re there.

The place is moodily dim and decked out with an eclectic variety of decorations. Music is European House, but played at a volume that doesn’t override your conversation. It’s exactly like one of those small laneway bars you would find in Melbourne; right here in Sydney!

A waitress brought water to the table as soon as we were seated, as well as the food & cocktail menu on a clipboard (just like the ones we had in school!). It’s table service here, but we didn’t feel pressured to order immediately. I had a glass of the NZ Alpine Valley Sav while we deliberated, and it was very tropical and fruity, quite strong on the passionfruit, which I enjoyed.

We decided to each order our own things and then have the the Assembly Fries with Cheese & Truffle Sauce ($8) to share.

The fries were absolutely gorgeous, although there was hardly enough sauce. I’m in a dilemma as to whether they beat Charlie & Co’s Truffle & Parmesan fries… To make a proper, informed decision, I’ll have to visit Charlie’s again soon. 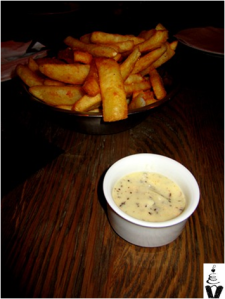 The Braised Sticky Short Ribs Off the Bone ($18) came out sans the broccolini. It was declared by the devourer that it tasted ‘more like a curry’, and when I swiped a spoonful, I got a massive mouthful of cloves, which I didn’t particularly enjoy. 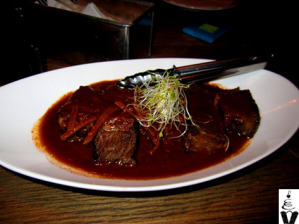 My Pork Belly Sliders ($14) however, were absolutely divine. They were so CUTE!! Not enough pork belly, in my opinion, but I enjoyed the fluffy brioche and the spicy sofrito (which had quite a kick!). The taste reminded me strongly of Chinese BBQ steamed buns. 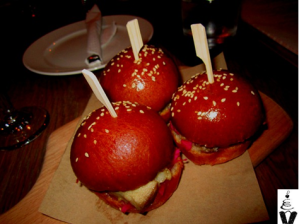 Another friend had the Crab with a Kick ($14), which was crab meat on sourdough with wasabi and avocado. I questioned her what the little green balls on top were, and after tasting them, she declared them tasteless. Very mysterious. 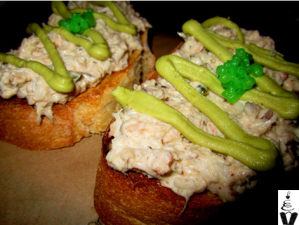 The Wild Mushroom and Lentil Hotpot ($14) was chosen by a friend who was ‘trying to be healthy’, because only someone who is ‘trying to be healthy’ would seriously order something like this while out at a bar, I tell you 😛 She said it was more like a stew, and I tasted a little, but I’m not very partial to lentils anyhow so I can’t really say. She finished most of it and said that it had been incredibly filling.

The Provolone Peppers Croquettes ($10) had been beckoning enticingly to me ever since I saw their menu online, and so I asked a friend to share them with me. We were aghast when five came out – how to share?? I promptly sliced one in half. They were nice and crunchy, the smokiness of the Provolone cheese glorious, however I missed the peppers, the inside the croquette was actually a little on the cold side, and it would have been nice if the tomato salsa had a bit more of a kick. 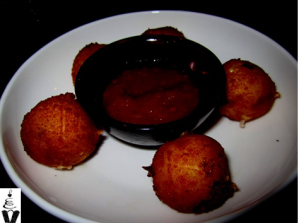 Our friends who arrived late ordered the Pork & Truffle Hot Dog ($10), which came out with shoestring fries on top. The presentation isn’t much to look at, but my friend declared it very tasty and loved the truffle flavour. 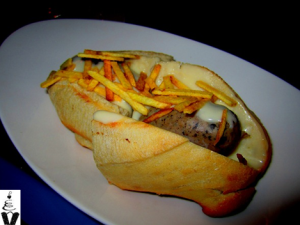 While the food was probably leaning more on the average side for me, I’ll definitely come back here to explore their drinks list, as apparently they’re best known for their cocktail concoctions. And I’ll have another round of Pork Belly Sliders, please!