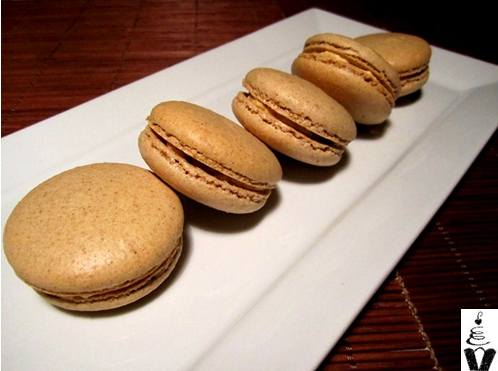 There are some moments in your life when the planets seem to align, so when you’re doing a particular task that usually doesn’t turn out as well as you’d like and it turns out perfectly…. It is truly an OH MY GOSH moment.

This happened to me today, when my Chai macarons turned out amazing. When my sister came home from work and tasted them, she declared them equal to, if not better than the ones we’ve purchased from Baroque, and that even Laduree didn’t have flavours as unique as this.

I found this recipe online from Meeta Weimar’s blog whatsforlunchhoney.net, however I’ve made slight variations to some elements. The amount of caramel buttercream was also INCREDIBLY excessive for the number of macarons, and would have been enough for even another two batches of macarons. I had a full takeaway box of the buttercream remaining, which I will need to think of how to use up later this week.

During the last week, I’ve been going through some blogs, trying to figure out why it was that the tops of my macarons weren’t coming out smooth and shiny. I figured one reason would be that my mixture wasn’t as ‘flowing’ with the magma texture that it’s supposed to be; my batters have been a little on the dry side lately. However I read from another blogger that the almond meal we purchase in Australia is actually very wet, and so it’s better to dry it. I dried it by spreading the almond meal out over a baking tray, then placing it in the oven at 150 degrees Celcius for five minutes before removing it and allowing it to cool down completely.

Once its fully dried, add it to your weighed out icing sugar and sift the two together.

The amount of spice you decide to use in this recipe is entirely up to you. I have a Chai mixture at home which is more vanilla-based, which I prefer, but I didn’t think it had enough of a kick and strength to use in baking.

I therefore decided to add additional cloves, cardamom and cinnamon. Ignore the ground ginger, I ended up not adding any. After sifting all of my almond meal and icing sugar into a bowl, I added the Chai Tea mix and pretty much just kept adding cinnamon, cloves and cardamom until I could smell the heady, spicy warmth. I would recommend you use pre-ground spices, rather than grind your own, as you’re unlikely to be able to grind your spices finely enough for macarons.

Anyway, to the recipe.

1. Sift your icing sugar and almond meal together to combine. Add the Chai mix and your additional spices (if desired), mix until well combined.

2. Whisk the egg whites in a clean, dry bowl until foamy (approximately 30 seconds on a high setting), then with the mixer still on high, gradually add the caster sugar until stiff peaks form. This should take around about 8 minutes or until you feel confident enough that if you were to invert the bowl over your head, the egg whites wouldn’t fall out.

3. Slide the egg white batter slightly over and add half of the dry ingredients. Fold it into the egg white mixture using a large spatula, and when well combined, add the other half. At this stage, I felt the mixture was too dry so I added another five grams of raw egg white (unwhipped), folded it in, and the mixture became deliciously smooth. When I piped them, I knew I had hit jackpot.

You can obviously see I’m not one to follow guidelines. I’ve read recipes that said you should pipe sizes of approximately the diameter of a 20c coin, but that’s way too small for me.

Bang the tray on the countertop firmly to let any air bubbles come to the surface. Let this mixture rest for 45 minutes to an hour in a dry, cool room. In the meantime, preheat your oven to 140 degrees Celcius.

Once your macarons have sufficiently rested, bake them in the oven for 20-25 minutes. I baked these longer than I have my previous macarons due to the mixture being slightly runnier. And I was delighted when I turned them out!

Although my half-tray rested for the shortest time and sat on the lowest shelf in the oven, so the macarons came out cracked and retarded, but I wasn’t too fussed as there were only three…

Dampen a surface with a wet dishcloth before sliding the warm macarons (stuck to the baking paper) onto the damp surface. The thermal heat will allow the macarons to come off easier when you lift them off with a spatula.

Success! They’re a little ‘grazed’ on the bottom, but it’s no issue as they’re going to be sandwiched anyway. It means they’re still tender inside. 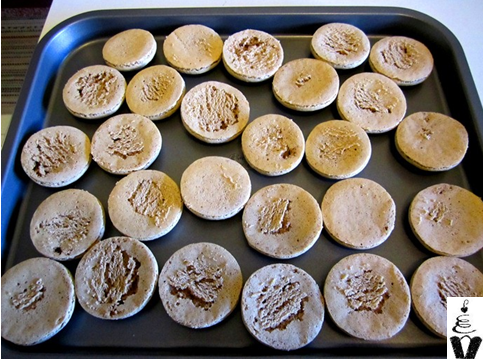 As you allow them to cool, work on your caramel buttercream.

As I said before, the amount of buttercream this makes is enough for three times the macaron recipe, so either divide it by a third or make three batches of macarons… or you can always make a cake and use up the buttercream as icing!

1. Spread the caster sugar evenly over the base of a frying pan on low to medium heat. DON’T TOUCH IT, let it sit, and after a while you’ll see the edges start to caramelise. Using a wooden spoon, gently push at the edges and work the melted caramel through the remaining sugar until it’s all melted.

4. Once all smooth and caramel-ly, pour into a bowl and cool completely. Cover the surface (of the caramel) with cling film to avoid a skin forming.

5. Once its cooled, whip 140g butter in a mixing bowl using an electric beater until pale, then mix in the cooled caramel in two batches until smooth.

Sandwich your macarons with this glorious cream. 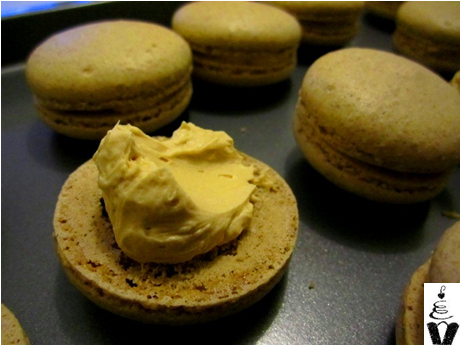 Most of all, I was pleased with my ultra-smooth, sleek tops! Whether it’s from drying the almond meal alone, or the combination of doing that with the addition of extra raw egg white, I’m not sure, but it’s definitely a combination I will be remembering for my macarons in the future.

Enjoy the rest of your week, lovelies, and stay out of the cold… I think some coffee macarons are in order over the next week to help use up the rest of that buttercream 🙂