So earlier this week, I totally could not be bothered to bake anything, and I was in desperate need of a sweet fix. Unfortunately I’m a bit strapped for choice around my area as to quality patisseries (I do wish I lived in Leichhardt sometimes), so Pattison’s is pretty much THE place to order pricey cakes and sweets around the ‘burbs.

I visited their Chatswood Chase store and I was disappointed to see that they don’t have as many small cakes as they used to – previously they had miniature versions of the decadent Conrad Torte and a divine Chocolate Creme Brulee, but all gone! So I went for my usual, a baked cheesecake – you can get raspberry or blueberry (about $5.50 each, from memory), and I decided to try their lemon meringue tarts (the same price). I saw their selection of macarons, and although my sister had previously told me that their macarons were a far cry from the landed-from-heaven ones from Baroque, I decided to give them a go and so bought a Salted Caramel one (because really, you can never go wrong with salted caramel). I found it a bit strange that they had macaron flavours which were only available in a box of six, such as honeycomb and peanut butter, and who would want a whole box of the same flavour? Anyway, after collecting and paying for my sweets I made myself scarce and took my precious home. 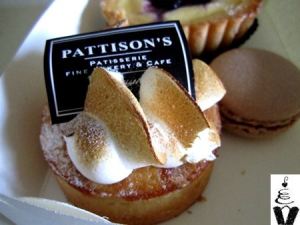 You can’t see it in the picture, but on the other side of the paper was a slice of decorative lemon, and when I bit into it, I was bitterly disappointed to discover that it wasn’t candied, and not to mention that it had a massive pip in it. Pip aside, the meringue was nice and fluffy, the lemon curd not as zesty as I would have liked, and while the shortcrust pastry was nice, I found it a bit too thick. 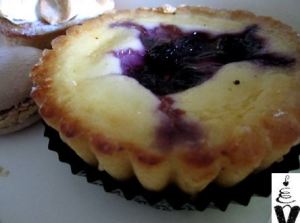 I always buy the cheesecake here…and seriously, you can’t go wrong. Gorgeous, buttery crust, and cream cheese baked to a consistency that you swear it’s going to clog your arteries (mmmmmmm….).

Pattison’s needs to work on their macarons a bit more. The top is very grainy, a result you tend to get from making them at home as grocery-store bought icing sugar just doesn’t have the same consistency as the industrial-type bought by the professional patisseries (like Baroque and Pierre Hermes!). While the salted caramel ganache was very nice, the macaron shell itself had a very heavy icing sugar flavour and I wasn’t getting much of the almond coming through.

I used to buy my birthday cakes here, but upon discovering La Renaissance in The Rocks, I’ve started to buy my cakes there, as there is barely any price difference between their full-sized cakes and the ones at Pattison’s (and the ones at La Renaissance are more beautiful and balanced in flavour as well!). However for a quick, local gourmet sweet fix, Pattison’s is a good choice.