So last night I set myself a reminder on my phone to watch How to Cook Like Heston on SBS. Who can resist Heston Blumenthal? Charming, humorous and not half as pretentious as all the other culinary all-stars, Heston has to be my favourite male celebrity chef. However I’ve never actually attempted to make anything by Heston, due to the fact that he uses so much wacky molecular gastronomy stuff.

I was pleased to see his new series focussed on the very basics in the kitchen, and this week featured possibly the most important ingredient in the kitchen: eggs. I had to watch this, as I have issues with attempting to perfect the poached egg. I’ve tried everything, including:

Heston’s methodology was as follows:

1. You need a fresh egg. You can tell whether or not an egg is fresh by dropping it into a bowl of water and seeing if it floats or sinks. If it floats, it’s an old egg and has developed an air pocket. Whites go watery as the egg becomes older and so causes all the stringy bits when it cooks. A fresh egg will sink.

2. Boil some water in a saucepan. When the water reaches 80˚C, place an upturned plate into the bottom of the saucepan so your egg isn’t directly exposed to heat. Turn your stovetop heat to the lowest setting so this temperature is maintained. 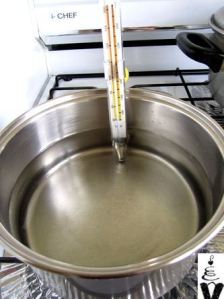 3. Heston says to crack your egg into a bowl and slide it into a fine sieve as even a fresh egg will have some stringy bits (unfortunately this removed about half of my egg white). The following times that I’ve made it, I just skipped this step and there wasn’t any noticeable difference. You MUST NEVER however, just crack the egg straight into the saucepan (or straight into anything for that matter, like cake batter), as there is always the potential for a bad egg or shell fragments. Grease a plate lightly with oil and slide it into the water (make sure that it will FIT first of all), and slide your egg carefully into the water onto the plate.

4. Set your timer for four minutes.

I placed my beautiful poached egg on top of a slice of toasted buttery sourdough, sprinkled it with a bit of salt and pepper, as well as a few drops of white truffle oil (as I am a complete truffle oil whore).

Perfecto!! The best poached egg I have ever made… although the amount of washing up afterwards for one egg made me quite sad. But MMMM the yolk… I think it’s worthy of another picture 🙂 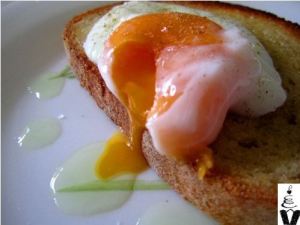