Confession: I’ve never been a huge fan of cupcakes. Seriously. Give me a muffin any day, muffin top exploding out of its wax paper casing, with blueberries so plump that they have exploded in miniature climaxes. Or chewy, juicy pieces of apple spiced with the sweet tang of cinnamon. Or choc chips that appear to hold their form, but melt in the most luscious manner upon touching your mouth.

Ahem. Cupcakes, compared to muffins, are much smaller, much drier, as well as being much more fiddly to bake. Their only claim to fame is their level of ‘prettiness’, and it is, as a general rule, very easy to make cupcakes look pretty with a neat frosting pyramid of luscious buttercream.

If this is so easy to make, why are cupcakes so expensive? I have never understood the phenomenon behind Sydney’s Cupcakes on Pitt, where the flavours aren’t anything spectacular, and the size per cake is approximately two bites; one if I’m particularly ravenous. I still remember when Cupcakes on Pitt first opened many years ago and their cupcakes were normal hefty-paperweight-sized cakes, rather than the overpriced miniatures they resemble today. But having said that, I would still prefer a cake from Cupcakes on Pitt than one from Ghermez Cupcakes, where the icing isn’t even piped on at all, but merely smeared on with a measly palette knife. Quite poor form, can I say.

When baking a presentable cupcake, here are a few tips:

+ Never fill the patty cases all the way to the top;

+ If the recipe calls for 180 degrees Celcius, bake them at 160 for a slightly longer period. This will prevent little Mt Vesuviuses forming, and make them easier to ice and smooth on the fondant (which I will show you via video in my next cupcake blog);

+ You do not need a ‘Cupcake Pen’ or any fancy piping contraptions. A simple kit from your nearest Hot/Red/Top/Bargain Dollar (or any other discount store) shop will suffice. The one thing letting these bargain kits down is the size and material of the piping bag – I’ve split mine on numerous occasions, and last year I finally went out and got myself a polyflex reusable bag from a kitchen store (approximately $5), which I trimmed down to fit my bargain shop piping nozzles;

+ Experiment with the different nozzles before piping. I tend to stick to the simple star-shaped one, simply because I don’t know how to use the other ones (other than the basic round one, but I don’t want my cupcakes to look like they’re topped with….well, you can imagine). I am however, doing a Piping Course in late March so I will finally know how to best use all of them – I will let you know what secrets I discover!

+ When piping, hold the nozzle directly above the surface, approximately 1cm above.

+ Use a cake mix if you’re pressed for time. I recommend Green’s brand Classic Chocolate Cake, and then whip up your own batch of buttercream for the frosting. My mother gives me the ready-to-stir butter frosting that comes with Green’s Carrot Cake (she prefers carrot cake sans the icing), so for me it’s a simple matter of making the frosting, and then perhaps adding some dye and essence (peppermint, orange, or strawberry). If you want to really glam them up, buy some sprinkles or edible confetti from a well-stocked supermarket or any good kitchen shop (Wheel & Barrow, etc).

In this blog I’ve added a recipe for Red Velvet cupcakes, which were probably my most successful batch of cupcakes ever. They were moist, creamy, and fire-engine red. Because of the intensity of the red-colouring however, I have found myself slightly adverse to making them again, pretty and tasty as they were. However, with Valentine’s Day soon, it may just be the perfect gift to surprise someone! Note however, that don’t even think about reducing the amount of food colouring required for this recipe. With Red Velvet cupcakes, the alkalinity of baking powder and bicarbonate of soda, as well as the high heat, will turn the cake brown when it cooks. Therefore you need to add acidity in the form of lemon juice, or in this case, vinegar, to maintain the deep, velvety lusciousness of the red. 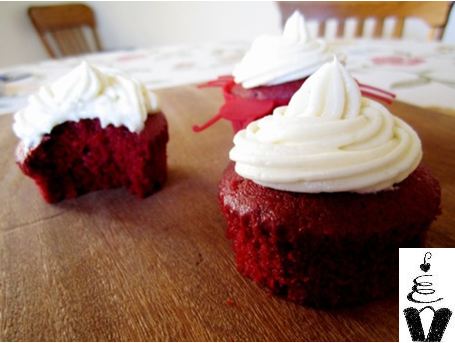 *You can buy little jars of red food paste (Wilton is the most common) from kitchen stores. These are denser and less runny than the usual kits in the supermarket, which will affect the colour and consistency of the cupcakes.

** If you do not have any buttermilk, you can easily turn fresh milk into a buttermilk substitute. Pour 250ml milk into a jug, add one tablespoon lemon juice (or vinegar), and let it stand for five minutes before using as directed in the recipe.